The human microbiome is a microbial community defined as the total of all microbes living in or on the human body. It affects the nutrition of the body, its metabolism, and its immunological responses. Adaptive and innate immune factors influence the microbiome and dietary patterns, medication, and toxins. Human illnesses also change the microbiome profile. 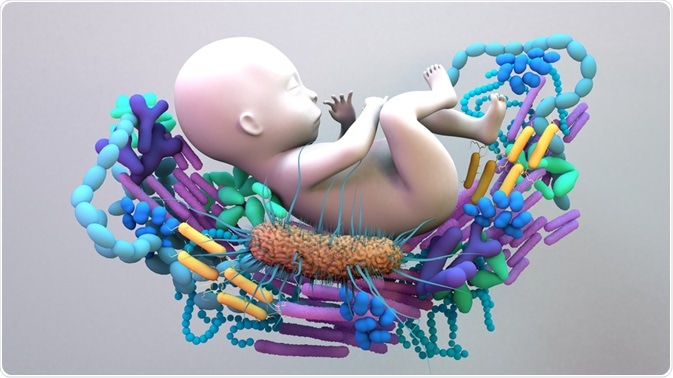 The gut microbiome is among the most important parts of the microbiome in humans. It begins to evolve during fetal life. The most important source of gut organisms is the mother's gut microbiota, to which the newborn is exposed. These bacteria spread to the child's digestive tract, respiratory organs, urogenital tract, and the skin at or before the time of birth.

Over one week after birth, babies have developed a gut microbiome containing Actinobacteria, Proteobacteria, Bacteroidetes, while Firmicutes are relatively low, though present. This indicates that babies are exposed to these bacteria before birth, rather than after, from a source such as the placenta.

The intrauterine environment was previously thought to be a sterile one. Still, more recently, research suggests that the same microbes are present in the fetal meconium (stool) and the amniotic fluid, and the placenta also contains microbes. In such a case, microbial colonization would occur long before delivery.

The microbes in the placenta comprise a wide spectrum, including Firmicutes, Tenericutes, Proteobacteria, Bacteroidetes, and Fusobacteria phyla. These are also found in the mouth.

After a vaginal delivery, infant gut microbiomes are typically colonized by maternal vaginal flora like Lactobacillus and Prevotella species. In contrast, maternal skin flora are dominant after a cesarean delivery – Clostridium, Staphylococcus, Propionibacterium, and Corynebacterium. The number of anaerobic species, such as Bacteroides and Bifidobacterium, is low in babies worn via cesarean than those born vaginally.

This difference persists up to seven years after birth, and the gut of Cesarean-born infants continues to have an overall lower number of species. The differences between individual neonates are due to the variability of immune-microbiota interaction. To compensate, the practice of vaginal seeding has been carried out, though it is now considered unnecessary and potentially unsafe.

Overall, the pattern of appearance of aerobes such as Staphylococcus, Streptococcus, and Enterobacteria, with anaerobes such as Eubacteria and Clostridium appearing later, while Bacteroides emerge at different time points. The presence of Bifidobacteria is controversial, and more research is required to reflect the neonatal gut's microbial profile accurately.

Researchers Emily Gritz and Vineet Bhandari say, "Gut colonization patterns established within the first week of life are thought to have effects on the composition of the individual's future gut microbiota via a variety of factors."

Human milk contains many non-nutritional factors such as lactoferrin, secretory immunoglobulin A (sIgA), oligosaccharides, interleukin-10, and other inflammatory mediators, which may play key roles in the inflammatory response to bacteria in the gut.

Breast milk also contains living bacteria belonging to Staphylococcus, Streptococcus, Bifidobacterium, and Lactobacillus. Some of these reach the milk via the entero-mammary pathway. Bifidobacterium and Bacteroides, which are probiotic, thrive on undigestible carbohydrates in milk, which ferment in the colon.

However, breast milk becomes more uniform in composition, shifting from microbes present on the skin and gut, found in colostrum, to those found on infant skin and mouth in mature milk. Microbes from the mother's breast skin and intestine have traveled via the intestinal lymphoid cells to the breast.

Formula-fed infants will have a different microbial pattern because the oligosaccharides in formula milk have a different structure from those in breast milk. Like adults, their gut microbiome is dominated by Clostridia. Unlike the dominance of Bifidobacterium and Lactobacillus in exclusively breast-fed infants, the former group has greater bacterial diversity, even if only a small fraction of feeds are made up of formula.

Bifidobacterium species are most commonly involved in normal development. The abnormal profile in formula-fed infants can be corrected by providing a why-based formula rather than the conventional type.

Secretory IgA reflects the mother's microbiota and protects both the infant's gut and immune system against infection by pathogens that could cause an unhealthy microbiome. It binds microbial antigens and triggers a "tolerogenic" mode of innate immune responses when exposed to such antigens, regulating immunity via multiple pathways. This modulates the function of the gut microbiome.

The gut microbiome provides microbial signals that activate innate immune cells but induce regulatory T cells and sIgA, thus preventing the overactivation of helper T cells. Lack of such exposure is thought to be partly responsible for asthma, allergies, and diabetes, due to autoimmune activity.

Infants born with a weight below 1,200 g seem to have mostly Firmicutes and Tenericutes species in the gut. This shows that the extent of seeding of the microbiome depends on the term of pregnancy, probably because swallowing begins with neurological maturation during the third trimester.

Preterm babies are at increased risk of gut dysbiosis. The factors responsible include antibiotic exposure, increased risk of Cesarean section or rapid vaginal delivery, formula feeding, prenatal illness or medications in the mother, potential maternal infections, smoking, stress, and resulting inflammation. Post-natally, too, these infants are at higher risk of invasive procedures, pathogenic flora in the neonatal intensive care unit, medications that alter their gut pH, and lack of exposure to the microbiota of the mother and the home.

Preterm infants also show reduced microbial diversity and increased proliferating pathogens, besides being less stable and showing a delay in conversion to the adult pattern.

Antibiotics and the newborn microbiome

Infants born to mothers who receive antepartum antibiotic prophylaxis show a significantly different microbial profile, such as the overall reduced diversity of the gut microbial community. The levels of Actinobacteria, Bacteroidetes, Bifidobacterium, and Lactobacillus are reduced, while those of Proteobacteria, Firmicutes, and Enterococcus increase.

Similar effects occur if the infant is given antibiotics. In preterm infants, this loss of diversity is associated with a higher risk of necrotizing enterocolitis (NEC), which has a high mortality rate in this group.

The newborn skin is susceptible to various environmental influences that cause irritation, immune reactions, and actual cuts and abrasions. Unlike the intrauterine milieu, the newborn baby's skin has to adjust to changes in the pH, loss of water through the skin, and growth of the stratum corneum.

Early skin colonization is important in producing a healthy skin acid mantle and protecting the developing immune system. The vernix caseosa is an important contributor to skin health by keeping the skin hydrated, reducing the pH, and preventing pathogenic infections. This fat-protein-antimicrobial layer present at birth should therefore be allowed to remain except at skin folds. The baby is cleansed with water only rather than with soap and water.

More research will help understand how the newborn develops a microbiome protective against many future disease states, including the variables that impact it other than feeding patterns, mode of delivery, and antibiotic exposure. This will help develop suitable interventions, especially for women and their newborns, during the first 1,000 days of life, the critical window of microbial exposure.

Dr. Liji Thomas is an OB-GYN, who graduated from the Government Medical College, University of Calicut, Kerala, in 2001. Liji practiced as a full-time consultant in obstetrics/gynecology in a private hospital for a few years following her graduation. She has counseled hundreds of patients facing issues from pregnancy-related problems and infertility, and has been in charge of over 2,000 deliveries, striving always to achieve a normal delivery rather than operative.