Misty Copeland enjoyed a rare night out after becoming a mother, but her focus still remained on her beloved baby boy.

Attending an event honoring Jerry Moss on Saturday, January 14 in Los Angeles, the ballet icon told People the appearance marked “the longest [time] I’ve been away from [my son].” She continued to gush about motherhood, sharing, “It’s been incredible. Today was really difficult, leaving him. It’s only been nine months, but it’s the best job I’ve ever had.”

Copeland revealed that “just to be flexible and have patience” has been key in her parenting journey, and that demeanor extends to how she plans to return to the ballet stage as well. “I haven’t yet done it, so we’ll see,” she said of an eventual comeback. “I’m still dipping my toes back in and trying to get back in shape, but I’m excited to have that experience, after creating another human being. I can’t wait to see what it feels like to step back on the stage.”

The history-making athlete previously told People in July 2022 that she hopes to be back on stage by fall 2023. While she’s excited to resume her career, Copeland has no plans to bring her son into the spotlight with her. “Definitely with my son, I wouldn’t have him probably be on camera for anything,” she explained to the publication. “But when it comes to my career and what I’m doing, I’m really open.”

The ballerina shares her son Jackson with her husband, Olu Evans, whom she married in 2016 after 10 years together.

Before you go, check out these celebrity mothers who love being boy moms. 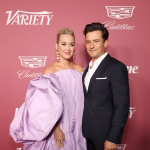 International Stuttering Awareness Day: Do’s and don’ts for parents while talking to kids