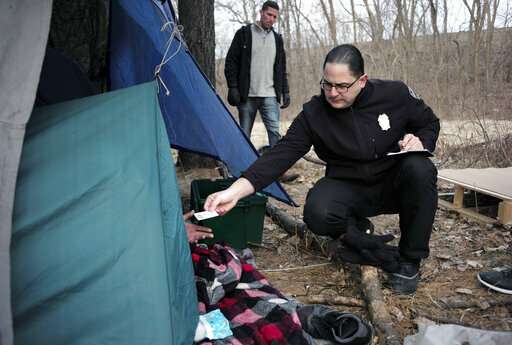 This industrial city in central Massachusetts has had many nicknames through the years, including “the Heart of the Commonwealth” and “Wormtown.” Among them was this less-known medical moniker: “Hepatitisville.”

Worcester has endured several outbreaks of the liver-battering disease, including one that sidelined 90 members of a college football team in 1969.

Given its history and its size, it wasn’t surprising Worcester was hard hit when recent hepatitis A outbreaks in the state started sickening—and killing—homeless people and illicit drug users.

The surge was part of a national rise in the viral disease. Outbreaks have popped up in 17 states in the last two years, leading U.S. health officials to recommend for the first time that a routine vaccination be given specifically to homeless people.

Some places have struggled to respond, watching deaths and illnesses mount. But this time, Worcester is a bright spot. City officials planned for an outbreak before it happened and used a coalition of agencies and community groups to meet homeless people where they live.

The relative success in Worcester has limited the illnesses and shown how long-term outreach to homeless people and drug users can pay dividends in times of crisis. The outbreak, which first flared in September, seems to be petering out at 58 confirmed cases.

“I think we had a great response. Everybody came together,” said Worcester’s health commissioner, Dr. Matilde Castiel.

When Victoria McMahon fell ill last fall, she initially shrugged it off, believing it was the kind of heroin withdrawal symptoms she’d weathered before.

But her eyes were yellow (“like a snake’s”) and her skin the color of a banana, she recently recalled.

A doctor told the 26-year-old she was in grave danger. She had hepatitis A. She was stunned.

“You usually hear about it in third world countries and places where there isn’t good hygiene,” she said.

There are different types of hepatitis—known by different letters—that vary in how common they are, how sick they make people and how they’re spread. 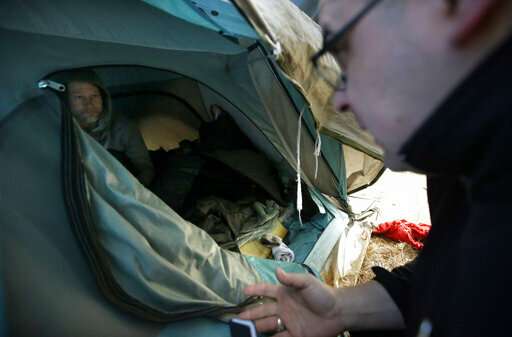 In the United States, hepatitis A is less common than some other forms of the disease. It tends to be thought of as a kind of food poisoning, sometimes spread through tainted food or spurred by an infected food-handler with poor hygiene. Most infected adults suffer fatigue, low appetite, stomach pain, nausea, and jaundice—symptoms that usually end within two months of infection.

It also has been thought to be on a path to vanishing. Hepatitis A rates have fallen by more than 95 percent since a vaccine first became available in 1995. Aiding that decline is a 13-year-old CDC recommendation that doctors vaccinate all 1-year-olds, meaning basically all cases these days are unvaccinated adults.

As recently as 2015, there were fewer than 1,400 cases reported in the U.S., according to the Centers for Disease Control and Prevention.

Then came the recent outbreaks throughout the country. It started with one in San Diego that killed 20 people and hospitalized about 400. Officials eventually declared an emergency and sent nurses out with homeless service workers to visit people living in parks and ravines.

Last year, there were more than 11,000 hepatitis A illnesses reported nationally—including about 40 deaths. It’s been worst in Appalachia, with more than 3,000 cases reported last year in Kentucky and 2,000 in West Virginia.

Hepatitis A outbreaks can burn themselves out after a large number of people are exposed to the virus, but vaccinations are considered a crucial way to halt them faster.

Public health funding has been flat or falling across much of the country, and the job of dealing with outbreaks has been left to under-staffed and cash-strapped local health departments.

Outbreaks have waned in some places, but it’s not clear when the national surge will end. Some states, including Illinois and Louisiana, recently reported new outbreaks.

The outbreaks have drawn relatively little attention, some health officials say, in part because of the people who are the victims: mostly homeless people and people who inject drugs.

“I think if this were 10,000 cases among fifth-graders, the response would be very different,” said the CDC’s Dr. Monique Foster.

CDC experts say that since 2017, about 57 percent of cases have been hospitalized, a rate they call staggering compared with past hepatitis A outbreaks.

The size and severity of the outbreaks “took everyone by surprise,” said Dr. William Schaffner, an infectious diseases expert at Vanderbilt University in Nashville, which saw nearly 200 cases in the last year. 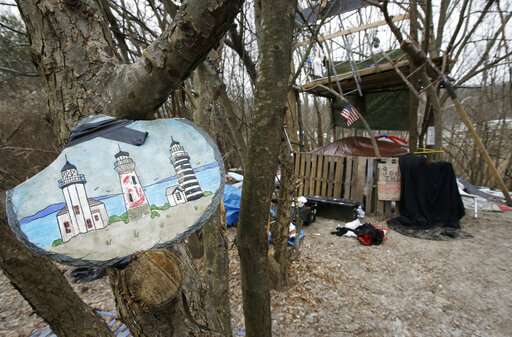 The surge coincided with outbreaks of HIV and hepatitis C, and like them was tied to a national overdose epidemic involving heroin and other opioids. But it was unusually deadly because many of the people who got infected—like McMahon—had livers already damaged by hepatitis C or longtime alcohol consumption.

“When you already have a diseased organ, adding another infection can lead to increased risk for bad outcomes” like liver failure and death, said Dr. Denise De Las Nueces, medical director of Boston Health Care for the Homeless Program.

To fight the outbreaks, the CDC last month took the unusual step of recommending all U.S. homeless adults get shots to prevent hepatitis A. It was the first time the agency has targeted the homeless in a routine vaccination push.

Worcester is in the midst of an urban renewal, with work on a new baseball stadium downtown and a stream of professionals from the Boston area arriving in search of cheaper housing. But for many decades it was a decaying mill town where hepatitis was relatively ordinary, as symptomless kids frequently spread it around to friends.

“It was a common summer infection,” said Dr. Leonard Morse, a retired physician who led the city’s health department for decades.

Worcester drew national headlines in 1969, when a hepatitis A outbreak traced to a contaminated faucet sickened more than 90 members of the Holy Cross College football team. The squad had to cancel most of its season.

Another lowlight occurred in the mid-1980s, when a hepatitis B outbreak among drug abusers and their sex partners was accompanied by a very unusual spike in simultaneous infections with hepatitis D. That outbreak sickened at least 135 and killed 11.

“We were the hepatitis D capital of the United States,” said Dr. Erik Garcia, a Worcester physician who’s been treating homeless people since 1994.

There also was a 2003-2004 hepatitis A outbreak that infected more than 1,000 people across Massachusetts, including 144 in Worcester County, mainly among the homeless and those who injected drugs.

Despite that history, Worcester city officials didn’t vote to establish a needle-exchange program until 2015—nearly two decades after the state legislature allowed such programs.

The same year, Worcester’s city manager created a “quality of life” task force that included police officers and building inspectors. The intent was to make the city a nicer place, and a main focus was abandoned vehicles and illegal dumping. But the team also found itself responding to complaints about homeless encampments.

The team got to know many of the city’s homeless and took a gentle approach, offering them clothes and supplies and connecting them to housing and other services. The team gradually grew to include outreach workers who could help with mental health and substance-abuse issues. Starting last year, a nurse went along sometimes to offer flu shots. 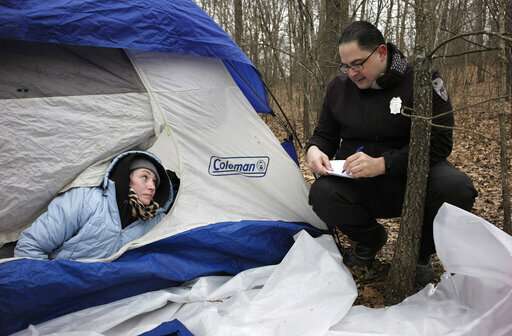 When a hepatitis A outbreak was reported in the Boston area last spring, Worcester’s health officials geared up.

They also knew they had to persuade homeless people and drug users to get vaccinations. With resources limited, they turned to an array of local organizations to help, including the quality of life team.

“They know us. We’ve been able to build a little bit of trust with them,” said team member Mike Girardi, a cop. “It’s not like a policeman in uniform that they’ve never seen before is showing up to their tent with a needle.”

Most shots were given at the more than 50 clinics held at homeless shelters, drug rehab centers and soup kitchens.

Some homeless people and drug users in Worcester said they were steered to vaccinations by team members. Others were motivated by seeing friends and acquaintances get sick.

Julie Scricco, 38, lives in a Worcester shelter and was persuaded to get vaccinated after seeing the outbreak unfold her around her.

“People’s eyes were getting yellow, and puking seriously,” she said. “I didn’t want to catch it.”

Tonya Bys, 31, and Amine Fodaile, 35, live on a wooded hillside about 150 yards off of a busy street, in a tent they bought at a Target. They said they stay outdoors because they worry about drug use and diseases in shelters. The couple got hepatitis A shots in January. Bys said they recognized they were at risk. “We’re recovering addicts and homeless” and both have hepatitis C, she said.

McMahon, the 26-year-old, was one of the early cases in the Worcester outbreak.

She said she had been injecting drugs since she was 19. At the time she got sick, she was homeless and had shared needles without someone who also caught hepatitis A. She’s now in an addiction recovery program.

McMahon called it a near-death experience but said it caused family members who had been distant during her years of drug use to rally to her side.

If someone hurt you this year, forgiving them may improve your health (as long as you’re safe, too)

New recommendations for a thyroid and cardiovascular disease research agenda