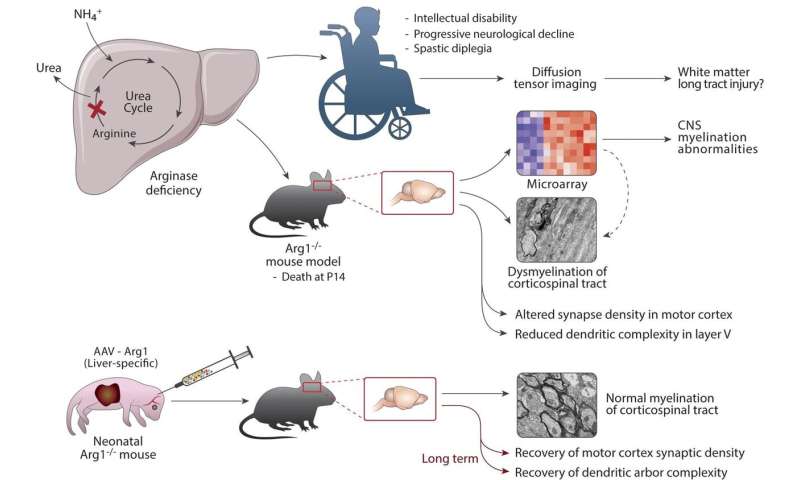 Most babies who are born with arginase deficiency—a rare genetic disease that leads to the accumulation of the amino acid arginine in the blood—don’t have symptoms at first. By the time they’re toddlers, however, their muscles stiffen. Seizures, tremors and developmental delays appear next, and over time the disease can lead to severe intellectual disabilities.

UCLA scientists have developed two new approaches to deliver functioning copies of the arginase gene to mice with arginase deficiency. One approach, which must be administered every three days in mice, uses tiny nanoparticles to carry arginase RNA to the liver. The other uses a virus to bring arginase DNA to the liver; if timed correctly in 2- to 4-day-old mice a single dose prevented symptoms of arginase deficiency from ever appearing in the animals.

“We’re at a time of innovation in genomics and genetics when we can bring new targeted therapies to people with inherited diseases,” said Dr. Gerald Lipshutz, a UCLA professor of surgery and the senior author of both studies. “These therapies may initially benefit the relatively small number of people with rare or orphan diseases, but eventually they will become more widely used.”

Arginase deficiency, which is caused by a missing or mutated version of the arginase gene, ARG1, affects about one of every 1 million babies born in the United States. Arginase is one of six proteins in the liver that play a role in breaking down and removing nitrogen from the body. Without arginase doing its job, arginine builds up in the blood and causes problems, mostly in the brain.

Many people with the disease attempt to treat it with a strict protein-restricted diet, which helps them avoid taking in nitrogen and arginine in the first place. There also are drugs that remove excess nitrogen from the blood, but they are expensive and are not very effective for most people.

To help them develop new therapies, Lipshutz and his collaborators first sought to better understand how arginase deficiency affects the brain in a way that causes the disease’s developmental and neurological symptoms. In a paper published in the journal JCI Insight, the scientists reported that mice with arginase deficiency had less than a quarter of the normal amount of myelin in their brains. Myelin is the material that surrounds brain cells like insulation and is key to communication between areas of the brain.

To test whether the lack of ARG1 was causing the loss of myelin, Lipshutz’s team designed a virus that could carry new copies of ARG1 DNA. When the team gave 2-day-old mice that lacked ARG1 an intravenous injection of the virus, they no longer had defects in their myelin. Levels of myelinated cells in the virus-carrying mice were close to normal.

“With just one dose of a drug, we could prevent these brain abnormalities,” Lipshutz said. “Going from almost no myelination to near normal was absolutely dramatic.” 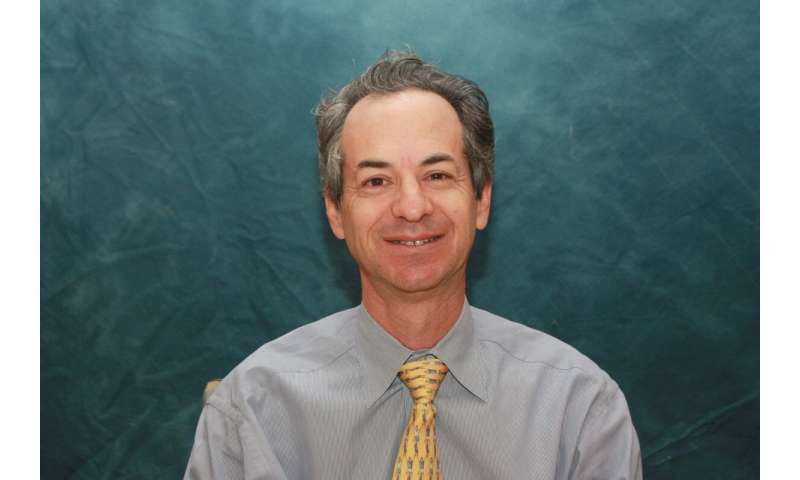 Researchers studying other genetic diseases have investigated using viruses to deliver healthy DNA to patients. Data from those studies suggests that the treatment may lose potency over many years. And because relatively few patients being treated for genetic disorders have received such therapies, researchers still must determine if the same phenomenon occurs in humans. However, Lipshutz said a virus-based therapy to replace ARG1 does have potential to work in people.

Lipshutz and his colleagues are currently studying cells taken from people with arginase deficiency to determine whether they also have myelination defects, and they plan to explore the molecular link between high arginine levels in the brain and the loss of myelin, which could reveal other targets for drugs to treat arginase deficiency.

In a second paper, published in the Proceedings of the National Academy of Sciences, Lipshutz worked with Cambridge, Massachusetts-based Moderna Inc. to develop nanoparticles that carry RNA encoding the arginase protein to the liver. Mice without any functioning ARG1 quickly developed symptoms of arginase deficiency, and all died within 22 days; however, mice that received the nanoparticles were still alive after 11 weeks and had no signs of the disease. However, the drug had to be given every three days to continuously replenish levels of arginase in the liver.

“As long as we continued giving the therapy, the animals had completely normal metabolites in their blood,” Lipshutz said.

This year the flu came in two waves—here’s why