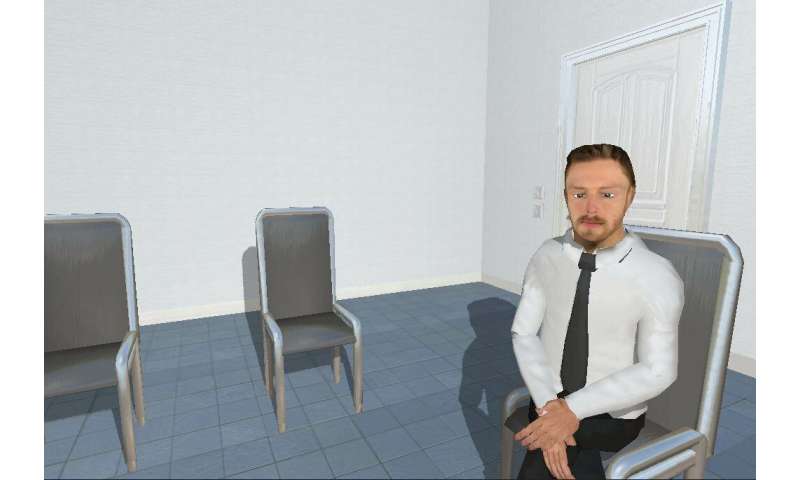 If people facing an acute stress situation receive social support from a “human” avatar, behind which there is (or is at least perceived to be) a real person, this works just as well as social support from a real person. Such is the main finding of a study led by Anna Felnhofer and Oswald Kothgassner from MedUni Vienna’s Department of Pediatrics and Adolescent Medicine and Department of Child and Adolescent Psychiatry.

A standardised experiment was conducted to study the effect of social support prior to an acute stressor. In the experiment, 56 study volunteers were given support – either face-to-face or by a virtual character, delivered via virtual reality glasses – before having to perform demanding tasks under time pressure in front of a large jury.

Less stress when given “personal” support

It was suggested to one group of volunteers that this avatar was controlled by a real person, while the other group believed that it was computer controlled. A further control group received no support at all prior to the stress test. Following the stress test, an additional social behaviour experiment investigated possible changes in prosocial behaviour – for example by systematic observation of helpfulness and social bonding.

The researchers determined the volunteers’ psychological stress during the stress test via their increase in heart rate. The main finding was as follows: the increase in heart rate was much less marked after prior support by a real person or a virtual person that the volunteers believed to be controlled by a real person (so-called avatars) than in the groups supported either by a computer character or not at all. Furthermore, the researchers discovered that the assessment of the stress test jury triggered far less shame and brooding in the test groups given human support, either directly or digitally. Similarly, it was found that these people were much quicker to offer help and exhibited a higher level of social bonding.

Plea for the human touch

“The results are also a plea for a human touch in the digital age. Moreover, social support is an important preventive factor against stress-related diseases,” says Kothgassner, providing a brief summary. “In our study, the impact of social support given face-to-face or via an avatar were, in effect, comparable. The subject only needs to believe that there is a person behind the avatar. This also opens up new perspectives and possibilities, particularly with regard to digital social networks or online games, which save a lot of social resources and can also have a preventive effect. To this extent, digital interactions should be given more credit as protective factors and not just be seen as a risk.”

Researchers point to a common cause in sudden death syndromes

Stroke risk drops in both black and white older adults