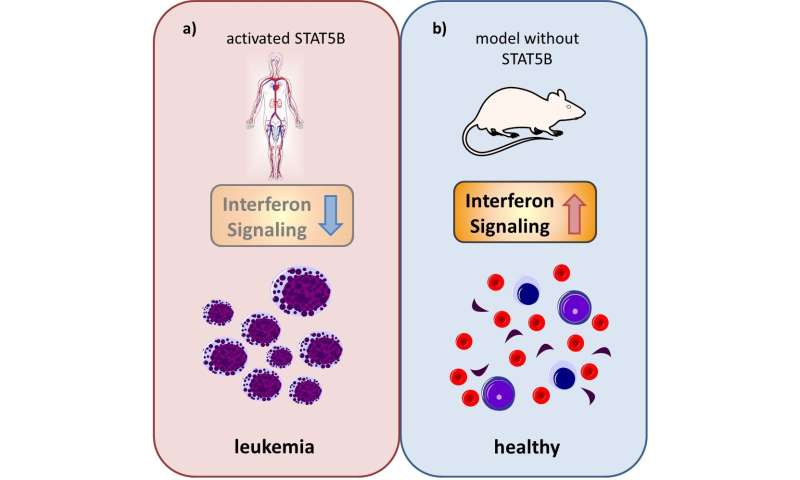 The BCR/ABL gene, which does not occur among healthy people, has been shown to be a causative agent in the pathogenesis of B-cell acute lymphocytic leukemia. The gene causes white blood cells to become leukemia cells that reproduce out of control. Earlier studies by the research group of Veronika Sexl at Vetmeduni Vienna had already shown that the STAT5 transcription factor was essential for the development of BCR/ABL-induced leukemia. The solution seemed simple: remove STAT5 and the tumor cell dies.

STAT5A and STAT5B: Not everything that looks the same is the same

But STAT5 actually consists of two genes: STAT5A and STAT5B. The two are very similar and, being more than 90 % identical, had been considered to be functionally equal. Research had therefore focused primarily on the function of STAT5A, as it had appeared to be of greater importance.

In their recently published study in the journal Leukemia, the researchers from Vetmeduni Vienna wanted to know for sure. Veronika Sexl from the Institute of Pharmacology and Toxicology at Vetmeduni Vienna was the director of the study: “In our previous studies, we always turned off both genes, as they are situated next to each other on the chromosome. What is exciting is that in recent years cases have been found of patients with mutations that result in STAT5 activation and are assumed to drive disease. Surprisingly, these mutations were found at a much higher frequency in STAT5B than in STAT5A.” This finding led the research team to ask: Why are mutations found in STAT5B and not in STAT5A? And why is overactivation of STAT5B “good” for the tumor cell?

The Vetmeduni Vienna research team probed these questions by investigating the different function of STAT5A and STAT5B in a mouse model and in human leukemia cells. The absence of STAT5A led to a decrease in cell survival and the formation of colonies of malignant cancer cells. Even more significant effects were observed in the absence of STAT5B. In the mouse model, loss of STAT5B increased interferon response and suppressed transformation. The opposite scenario was the case in patients with overactive STAT5B: the interferon response against tumor growth was suppressed, and transformation was enhanced.

Andrea Hölbl-Kovacic from Vetmeduni Vienna: “Our data show that STAT5A and STAT5B are twins with different personalities, and that STAT5B facilitates leukemogenesis in BCR/ABL leukemia. Our findings might help explain the high frequency of STAT5B mutations in hematopoietic tumors.”