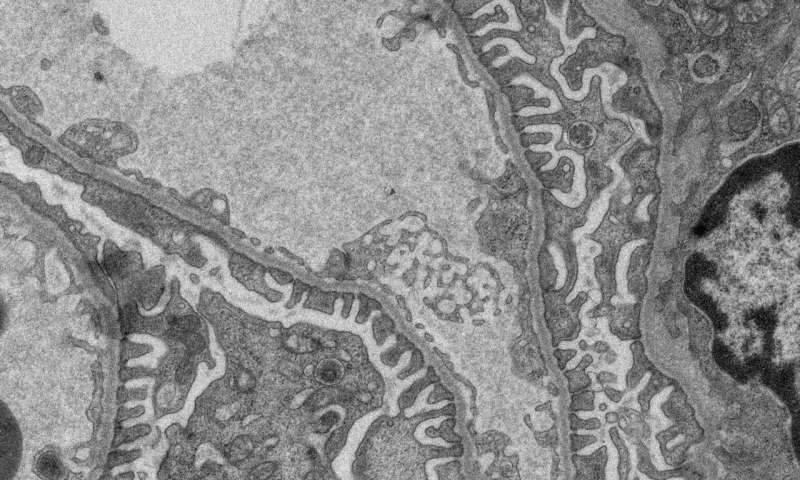 Scientists have identified an enzyme that is a “master regulator” of kidney function that if excessively suppressed, can trigger renal failure. Their findings have implications for the use of existing drugs and the development of new pharmaceuticals.

As reported in Nature Communications, a global research team led by the University of Bristol studied how the activity of the enzyme GSK3 (Glycogen Synthase Kinase 3) affects the function of podocyte cells, which are crucial in enabling the kidneys to filter blood.

In the podocyte, the GSK3 enzyme (which exists in two related forms in humans, ? and ?) stops the body from leaking protein into the urine and so prevents the development of kidney failure. However, when both GSK3 forms are excessively suppressed, GSK3 is not present in sufficient quantities and this is highly detrimental both during development of the kidney and in the fully mature kidney, increasing the likelihood of renal failure.

One of the drugs currently on the market that is known to suppress GSK3 is lithium. This is commonly used as a psychiatric medication and for conditions including bipolar disease. Some patients taking this medicine for a long time, or at high doses, have been shown to leak large amounts of protein into their urine and develop kidney failure needing dialysis or a kidney transplant.

There has also been a drive from the pharmacological industry in the past to develop GSK3 inhibitors for treating diabetes, cancer and Alzheimer’s.

This has prompted the authors of the paper to urge pharma companies to ensure that when developing these drugs, they ensure that the drugs do not over-suppress both forms of GSK3.

“We think that patients who are taking lithium treatment now should regularly have a simple urine test to measure the amount of albumin they are excreting, as too much albumin is a sign of kidney disease” said lead author Richard Coward, Professor of Renal Medicine and Consultant Pediatric Nephrologist at Bristol Medical School and the Bristol Royal Hospital for Children and the University of Bristol.

“If these patients have increased levels of protein in their urine, they should consider reducing their dose of their lithium or switching medications. We think this could prevent some of them from developing kidney failure.

“Our research further suggests that it would be sensible to try and develop drugs that selectively inhibit one of the two forms of GSK3.”

Earlier studies had suggested that inhibiting GSK3 in the podocyte may be beneficial in treating kidney disease. This is probably due to them selectively inhibiting the ? form of this enzyme. However, this latest research shows that too much suppression of the activity of this enzyme is harmful.

The authors studied mice and flies that had GSK3 selectively knocked out in their podocyte (or podocyte-like) cells. This was performed during the development of the animals and also when they were fully mature. In both species it was highly detrimental. They also looked at the reason why the podocyte became unhealthy by studying podocyte cells in a dish.

How to Ease Anxiety in Children

As U.S. measles outbreaks spread, why does ‘anti-vax’ movement persist?