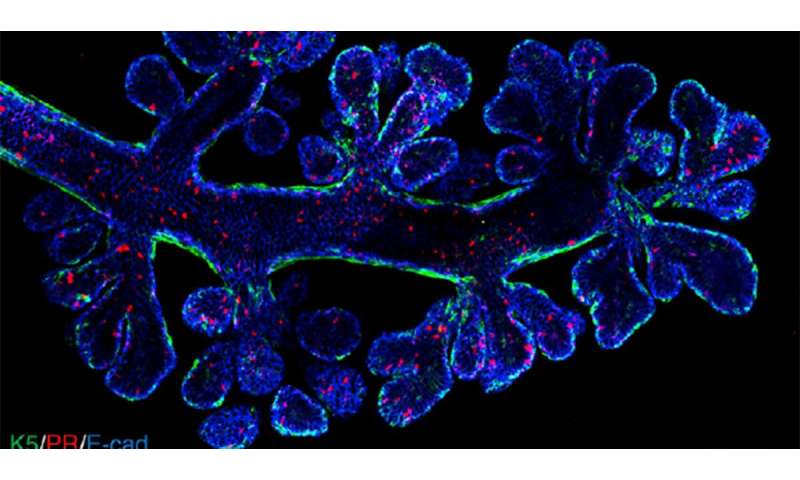 Using a laboratory model of breast cancer, the researchers were able to view tumours in three dimensions, at previously unachievable high resolution. This revealed how cancer cells develop from pre-cancerous cells in the mammary ducts, and changes that occur in the tumour over time.

The research, which was published today in the journal Cancer Cell, suggests that breast cancer cells are inherently changeable, morphing from one cell type to another at the molecular level—resembling cells that are more likely to spread.

The transformation of normal cells in the mammary gland to cancer cells occurs in many stages, with ‘pre-cancerous’ cells evolving into early-stage cancer cells, which may then undergo changes that make the cells more likely to spread away from the tumour. Until now, it has not been possible to visualise individual clones – ‘sister’ cells that descended from a single pre-cancerous cell—within a whole tumour.

Imaging technology enabled the research team to examine the frequency of pre-cancerous cells that develop into tumours in the mammary gland, and address the behaviour of cells within tumours. The study was led by Dr. Anne Rios with Professors Jane Visvader and Geoff Lindeman at the Walter and Eliza Hall Institute.

“Using a new imaging technique, we revealed that only a small proportion of pre-cancerous cells will develop into tumours,” Professor Visvader said. “In contrast, once a tumour has been formed, we discovered it was very likely for its cells to undergo a so-called ‘epithelial-to-mesenchymal transition’ (EMT). This is a change in the ‘molecular landscape’ – the genes that are switched on or off—within the cell, transforming it from an ‘epithelial’ form, to a ‘mesenchymal’ form that could have a growth advantage.

“Our models suggest that EMT is not a rare event but is an inherent feature of mammary tumour cells.”

The results were obtained in laboratory models that closely resemble human breast cancer, and the team suspects human breast cancers are likely to also show a high rate of molecular EMT, said Professor Lindeman, who is also a medical oncologist at the Royal Melbourne Hospital and the Peter MacCallum Cancer Centre.

“If EMT frequently occurs in breast cancers, it means the cells are a ‘moving target’ – they can evade one set of weapons we have to fight the cancer, meaning we need to develop strategies that are more broadly targeted,” said Professor Lindeman.

A new three-dimensional imaging technique was critical for the discoveries said Dr. Rios, who now works at the Princess Máxima Center for Pediatric Oncology in the Netherlands.

“Until now it has been challenging to visualise the intricate structures of complex tissues such as breast tissue, or to see the true arrangement of cells within tumours,” Dr. Rios said. “We developed a new, rapid way to prepare tissue samples that retains their intricate architecture but allows us to distinguish individual cells and the three-dimensional structure of the tissue.

“Our method enabled us to capture previously unseen images of breast tissue and mammary tumours—this was crucial for us to discover the frequency of EMT within the tumours.

Self-Help and Living with Rheumatoid Arthritis