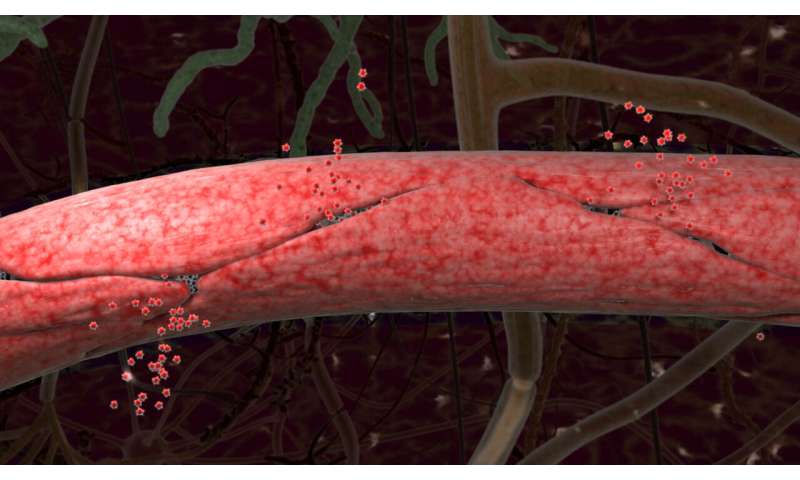 The findings, which appear in the Jan. 14 issue of Nature Medicine, could help with earlier diagnosis and suggest new targets for drugs that could slow down or prevent the onset of the disease.

The number of Americans with Alzheimer’s is expected to more than double to about 14 million in 40 years, according to the Centers for Disease Control and Prevention. There are currently five Alzheimer’s drugs approved by the U.S. Food and Drug Administration that temporarily help with memory and thinking problems, but none that treat the underlying cause of the disease or slow its progression. Researchers believe that successful treatment will eventually involve a combination of drugs aimed at multiple targets.

USC’s five-year study, which involved 161 older adults, showed that people with the worst memory problems also had the most leakage in their brain’s blood vessels—regardless of whether abnormal proteins amyloid and tau were present.

“The fact that we’re seeing the blood vessels leaking, independent of tau and independent of amyloid, when people have cognitive impairment on a mild level, suggests it could be a totally separate process or a very early process,” said senior author Berislav Zlokovic, director of the Zilkha Neurogenetic Institute at the Keck School of Medicine of USC. “That was surprising that this blood-brain barrier breakdown is occurring independently.”

In healthy brains, the cells that make up blood vessels fit together so tightly they form a barrier that keeps stray cells, pathogens, metals and other unhealthy substances from reaching brain tissue. Scientists call this the blood-brain barrier. In some aging brains, the seams between cells loosen, and the blood vessels become permeable.

“If the blood-brain barrier is not working properly, then there is the potential for damage,” said co-authorArthur Toga, director of the USC Stevens Neuroimaging and Informatics Institute at the Keck School of Medicine. “It suggests the vessels aren’t properly providing the nutrients and blood flow that the neurons need. And you have the possibility of toxic proteins getting in.”

Participants in the study had their memory and thinking ability assessed through a series of tasks and tests, resulting in measures of cognitive function and a “clinical dementia rating score.” Individuals diagnosed with disorders that might account for cognitive impairment were excluded. The researchers used neuroimaging and cerebral spinal fluid analysis to measure the permeability, or leakiness, of capillaries serving the brain’s hippocampus, and found a strong correlation between impairment and leakage.

“The results were really kind of eye-opening,” said first author Daniel Nation, an assistant professor of psychology at the USC Dornsife College of Letters, Arts and Sciences. “It didn’t matter whether people had amyloid or tau pathology; they still had cognitive impairment.”

Rates of type 2 diabetes seem to be dropping, but does that really mean we’re healthier?