Yoga saved my life: Mother, 38, claims doctors discovered she had a 1.5-inch brain tumour after complaining that she couldn’t stand on one leg anymore

A mother has credited yoga with saving her life after her loss of balance prompted doctors to discover a huge brain tumour.

Canadian Daphnee Paquin-Katma, grew increasingly alarmed when she was unable to stand on one leg in classes — something she had done with ease for years.

The 38-year-old noticed her balance gradually deteriorate over a year, to the point where she felt off-balance simply walking. Her hearing also worsened.

The yoga teacher, who lives in Poole in Dorset, finally went to see a doctor and was eventually was diagnosed with a 1.5-inch (3.8cm) acoustic neuroma.

The non-cancerous tumour grows on the vestibulocochlear nerve in the brain, which helps control hearing and balance. If left untreated, it can prove fatal.

Ms Paquin-Katma said: ‘If I had not been practicing yoga I wouldn’t have realised something was wrong’.

Acoustic neuromas are most common between the ages of 40 and 60 but can affect people of any age. 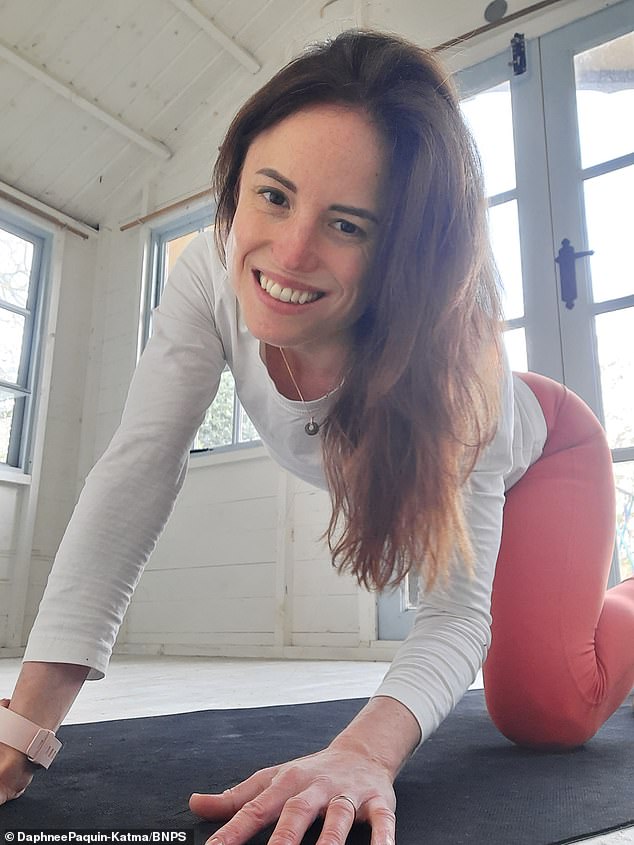 Paquin-Katma had been doing yoga for six years when she was diagnosed with the 1.5-inch tumour

Roughly one in 100,000 Britons and Americans are diagnosed with an acoustic neuroma every year. The condition is usually benign and curable.

If the tumour grows large enough, it can put pressure on the brain and cause a loss of balance, as well as headaches and changes to eyesight.

In extreme cases, it can cause a dangerous buildup of fluid in the brain or it can compress the cerebellum and brain stem, which can be life threatening.

Ms Paquin-Katma, originally from Montreal in Canada, had a 12-hour surgery to remove the tumour. 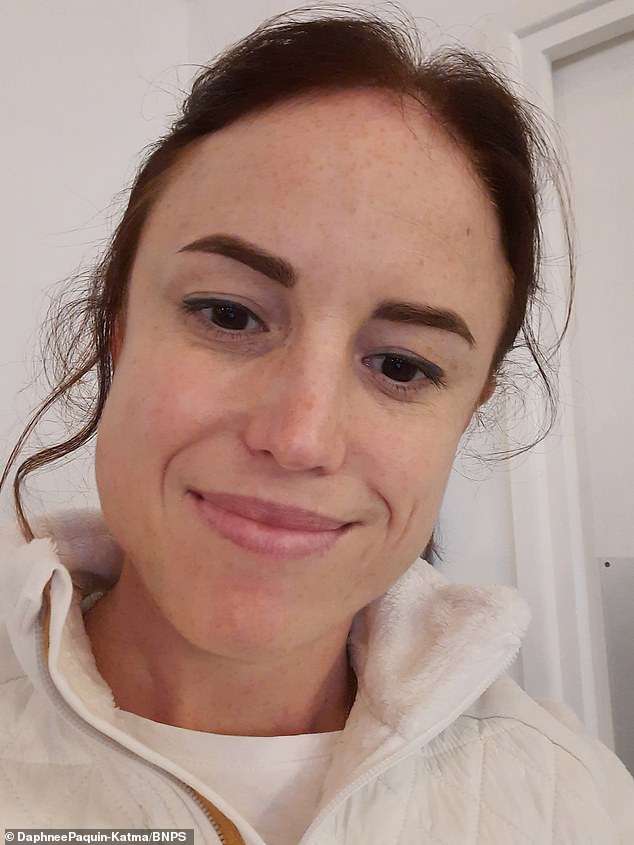 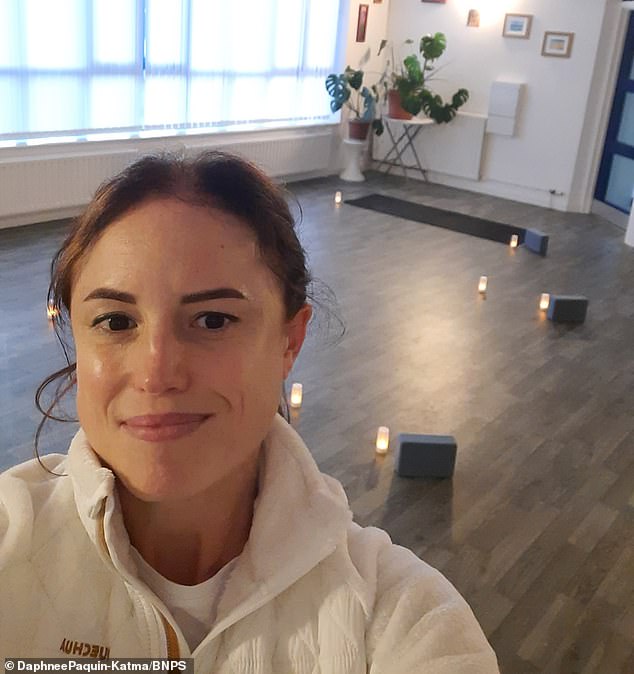 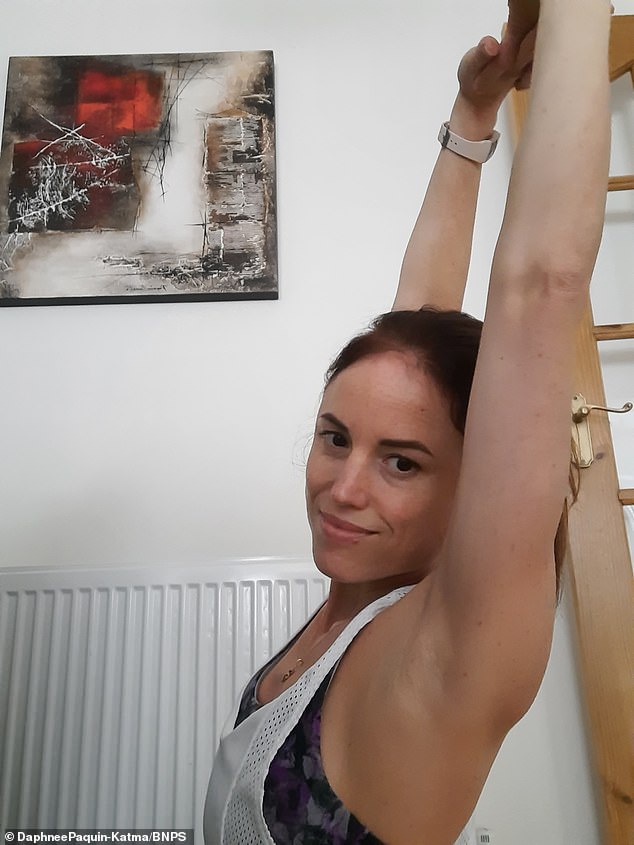 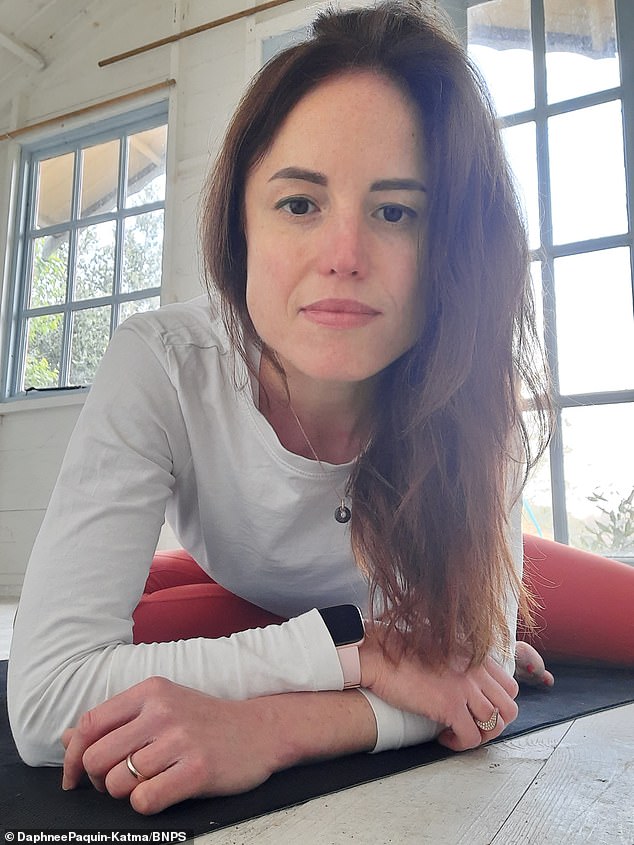 She has a three-year-old son and runs her own yoga classes in Poole, Dorset

Now fully recovered and with a three-year-old son, she has trained as a yoga teacher and runs her own classes in Poole.

She said: ‘I was practising yoga a lot before my diagnosis and I noticed that my balance was decreasing. I wasn’t able to balance on one leg which made me question my health.’

She was otherwise generally well and it was only her balance that made her speak to her doctor, which is when he realised she had a huge tumour.

‘It was such a huge shock,’ she said. ‘Following my surgery, I completely lost my hearing and I was walking with my hands in a ‘T-shape’ to help me because my balance was so bad.’

She decided to return to yoga but said she ‘really struggled because I had lost so much of my ability’.

However, she kept at it, and has since improved her balance and said she feels a lot stronger than she was before.

Yoga offers a myriad of health benefits, with studies showing it enhances flexibility, reduces stress and depression and improves inflammation.

WHAT IS AN ACOUSTIC NEUROMA?

An acoustic neuroma, or vestibular schwannoma, is a benign (non-cancerous) tumor in the brain.

It grows on the vestibulocochlear nerve, which helps control hearing and balance.

This nerve runs alongside the facial nerve, which carries information from the brain to the face muscles.

Acoustic neuromas tend to grow slowly and don’t spread to other parts of the brain.

WHO IS AT RISK?

There is only one known risk factor – having a parent who carries the rare genetic disorder neurofibromatosis type 2.

However, that only accounts for 5 percent of cases.

For the rest, it’s something of a lottery

The symptoms of an acoustic neuroma tend to develop gradually and can vary in severity. This can make the condition difficult to diagnose.

A small acoustic neuroma can lead to problems with hearing loss or tinnitus.

A large acoustic neuroma can cause a number of symptoms, including headaches and blurred vision, numbness and a problem with co-ordination on one side of the body.

Occasionally, large neuromas can also result in muscle weakness on one side of the face.

In rare cases, it may also cause changes to the voice or difficulty swallowing (dysphagia).

Covid vaccine priority list extended: Who will get vaccinated after over 50s?

Strokes: The breakfast food to eat to reduce the risk of suffering a stroke