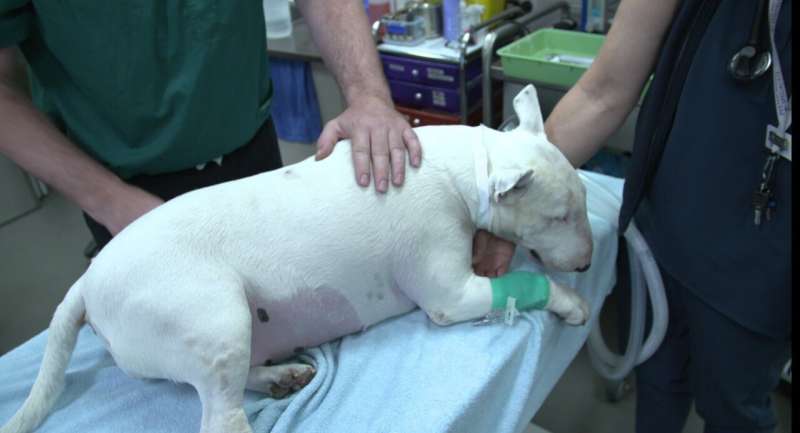 Telethon Kids Institute is leading a unique clinical trial in pet dogs that could pave the way for a new immunotherapy treatment for one of the most common childhood cancers, sarcoma.

The treatment is a polymer-filled gel which is loaded with immunotherapy drugs and can be applied inside the surgical wound when a patient has a sarcoma tumor removed.

Sarcoma is a cancer of the bones and soft tissues and is the third most common cancer in children, with one in three dying from their disease.

The head of Telethon Kids Institute’s Cancer Center, Associate Professor Joost Leisterhuis, said the first step for almost all sarcoma patients after diagnosis is surgery to remove the tumor.

“The surgeon will try to remove as much tissue as possible, but often some cancer cells are left behind and the cancer just comes back,” he said.

“With the immunotherapy gel, the surgeon would remove the tumor and apply the gel before closing the wound as they normally would.

“Then over time, the immunotherapy drugs get to work—drawing immune cells from all over the body and activating them at the site of the tumor to mop up any remaining cancer cells.”

The gel has shown positive results in lab models and is now being used at Perth Vet Specialists to treat pet dogs who have been diagnosed with sarcomas.

“Surprisingly, sarcoma is one of the most common cancers in pet dogs and it presents exactly the same way as it does in children with sarcoma, which is a lump in the tissue of the muscle or bone,” Associate Professor Leisterhuis said.

“The treatment is also the same—to surgically remove the tumor. And often, as with children, some cells will remain and the cancer will come back.

“This trial is giving beloved family dogs access to cutting-edge treatments for their cancer, and their owners can know that they are playing a role in getting this treatment one step closer to helping kids with cancer.”

Veterinary oncologist, Dr. Wyatt from Perth Vet Specialists said so far seven dogs had been treated with the gel in surgery and the results have been overwhelmingly positive.

“Sarcoma is actually more common in dogs than it is in people—we would see multiple patients per week with sarcoma and they can be fatal if they are left unchecked or spread into nearby organs,” he said.

“There doesn’t seem to be any problem in the healing of the dogs who’ve taken part in the trial so far, we seem to be getting a really good response from the gel.

“Everybody’s winning—the dogs are getting treatments they would otherwise not have access to and they’re also doing something that could ultimately help children with cancer.”

The gel was developed in collaboration with molecular scientists at The University of Western Australia, led by Associate Professor Killugudi Swaminatha Iyer.

Associate Professor Iyer, from UWA’s School of Molecular Science, said the gel is made from natural materials.

“The gel is made of long polymers which are natural and that are broken down by the body itself,” he said.

“So for this treatment, the team has tagged on some immunotherapy to those long polymers which are then slowly these are released in the body and the polymers themselves are broken down.”

The gel is made of natural polymers which are broken down by the body. The immunotherapy drugs attach to the long polymers and are then slowly released through the body.

Associate Professor Lesterhuis said there have been very few developments in sarcoma treatment in the last 30 years and children are still exposed to high doses of toxic radiotherapy and chemotherapy.

“Immunotherapy is one of the most exciting developments in cancer treatments but so far it has not had much success in sarcoma treatment,” he said.

“This is a cruel disease and the life-long side effects that kids suffer from more traditional treatments include learning difficulties, infertility, speech and vision problems and even secondary cancers—where the treatments themselves cause new cancers to develop.

“Our dream in the end is that with these sorts of immunotherapies we can replace chemotherapy and radiotherapy all together. But at this stage I would see it as an addition, where we might be able to reduce some of the chemo or radiotherapy.