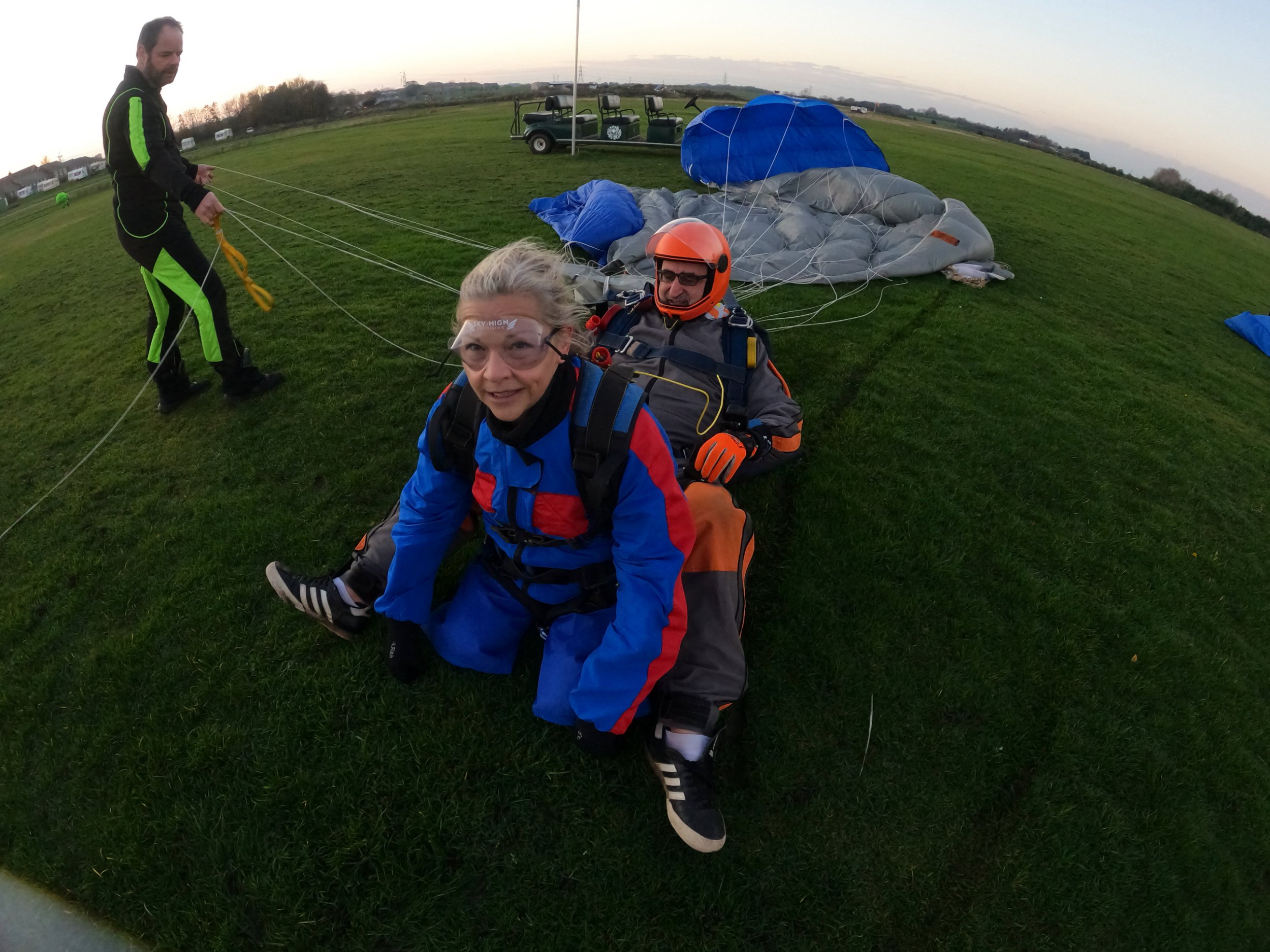 An inspirational mum who had both legs amputated has taken on tandem skydive.

Jo Spencer, 55, from County Durham, was diagnosed with Type 1 Diabetes at the age of seven.

In May 2020, a blood clot in her main aorta artery caused the toes on her left foot to turn black and blue.

‘As soon as I saw my left foot there was a part of me that knew I was going to lose it,’ she said. ‘It looked really bad.’

To view this video please enable JavaScript, and consider upgrading to a webbrowser thatsupports HTML5video

The mum of four was admitted for surgery where her left leg was amputated from below the knee.

However, when she woke up, she began to feel pain in her right leg, too.

‘My right leg was going cold and I was losing my pulse, so I was taken back to theatre for investigative surgery to see if they could save it,’ she continued.

Sadly, Jo’s condition deteriorated rapidly until her life hung in the balance and, on May 13, 2020, she had to have her right leg amputated, too.

‘It was horrific,’ she recalled. ‘I had no idea what was going on. I only knew what had happened when I woke in hospital from surgery. I was distraught.’

In June 2021, Jo and her husband, David 54, director of a financial company, started fundraising to make life-changing renovations to their home, in a bid to give Jo her independence back.

‘At the moment David has to carry me up the stairs to bed every night,’ explained Jo.

‘The whole point of the alterations is to make our home safe and to enable me to do all the things everybody else does independently.’

Jo is focusing on being able to walk on her own. Currently, she can walk while holding a stick in one hand and her husband’s hand in the other.

‘I feel like I just want to let go of David’s hand and just walk, but I haven’t got confidence to take that initial step,’ she said.

To help raise money for the renovations, Jo decided to take part in a tandem skydive with her son, Ben, who wanted to do one for his 21st birthday – but her GP refused to sign her off.

Having ‘always wanted to skydive’ since she was young, Jo was disappointed.

‘I was really upset at that point because I felt fit and healthy,’ she said. ‘So I searched for an aviation medical examiner and he signed me off to jump.’

As a bilateral amputee, there was a remote possibility Jo could have fallen out of the harness, but Sky High Skydiving in Shotton Colliery, Durham, designed a special harness for her.

‘When we were dangling over the plane I had that moment where I thought “I don’t know whether I can do this”,’ she said.

‘But I’m stubborn and determined and thought “no, I’m going to do this jump come hell or high water.”’

Suddenly, they were falling to the ground at 120mph until her instructor deployed the parachute.

‘I was just floating in the air, it was phenomenal,’ she said.

Now, the renovations can start on their home in January 2023, giving Jo back her independence.

‘The work begins in the second week of January,’ she said.

‘We self-funded a lot of it, but £15,000 was from the GoFundMe and then the rest was from donations and fundraising.’

The family raised nearly £25,000, but, with renovations costing £140,000, had to pull together the rest of the money from their own pockets.

‘I’m so thankful to the people that helped us get to this point,’ said Jo.

‘It’s going to be life changing.’

Coronavirus: Study shows how you could spread the virus without showing symptoms