Woman, 61, swallows a toothpick… and it ends up in her LIVER ‘after piercing its way through her bowel’

A woman was left needing emergency surgery after she swallowed a toothpick which ended up in her liver.

Doctors did not explain exactly how the sharp object punctured through the unnamed 61-year-old’s liver.

However, similar cases of people who have ingested toothpicks show they can easily penetrate organs inside the stomach.

The woman, believed to be from Beirut, had been suffering in pain all over her body for two months before she decided to go to hospital.

Doctors at Saint Georges Hospital University Medical Center carried out a series of tests – but all considered causes of her pain came back as negative.

Even an ultrasound on her abdomen, which was where she felt the most amount of pain, did not raise any flags. 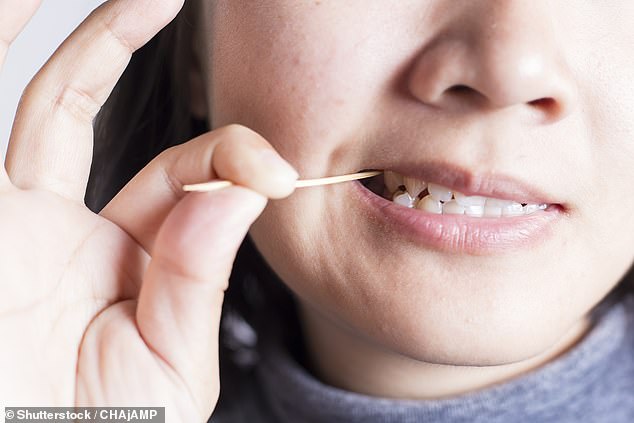 An early CT scan of the woman’s abdomen revealed there was a 3cm lesion in her liver, which the authors call an abscess cavity.

The doctors began to question if a foreign object had caused the internal injury.

There were also signs of fat stranding, a sign of inflammation, between part of the large bowel and the liver, which is how the two organs ‘communicated’.

HOW LONG DOES IT TAKE FOR A FOREIGN OBJECT TO PASS THROUGH THE BODY?

A group of Australian doctors each swallowed a piece of Lego as part of an odd experiment to work out how long it really takes for it to pass through the body.

As children are often rushed to hospital after swallowing small items, such as Lego, researchers from the University of Melbourne enlisted the help of six medical professionals and had them swallow the head of a Lego man.

The bizarre experiment, which the team branded ‘dedication to paediatrics’, was published in the Journal of Paediatric and Child Health.

Participants ingested a Lego head, after which it was a case of searching for the item in faeces, with the ‘search technique decided by the participant’.

The study found the small toy should be out within one to three days.

However, one patient never found the piece they swallowed in their faeces, searching for two weeks.

They added that although it is possible children’s digestion time would be different from an adult, there is no evidence to support this.

The woman was put on two weeks on antibiotics, but her symptoms persisted, according to the tale published in Clinical Case Reports.

An MRI scan then showed the lesion had doubled in size and surgeons decided to operate, according to author of the report, Dr Antoine El Asmar.

The team of medics came across a fine wooden tip protruding from the site, which they discovered to be a toothpick.

Around 136 cases of toothpick ingestion causing stabbing of organs in the stomach area have been reported in the US, medical literature states.

Of these, toothpicks made their way to the liver and patients needed surgery in 15 of the cases.

This is believed to be the first case of its kind, the authors said, because of the toothpicks route to the liver, which was by exiting the large bowel through the hepatic flexure, which is next to the liver – it is not clear how toothpicks have migrated in other cases.

Most swallowed foreign bodies pass harmlessly through the body.

However, patients commonly end up with bowels obstruction, either with the object making piercings where it shouldn’t and tears between organs.

Recurrent abdominal pain and fevers from an unknown origin are common symptoms – all of which the case study presented – and nausea, constipation and diarrhoea.

Foreign body ingestion is responsible for around 1,500 cases of death in the United States every year, the report said. The figures in the UK are unclear.

Figures of past medical cases show that one in ten patients who swallow a tooth pick go on to die.

This could be because although it is a medical emergency, and perforations of the intestine are associated high mortality, foreign body ingestion can be difficult to diagnose.

Surgical intervention can also be complicated and challenging, the authors said.

Why You Should Ditch Your Cloth Masks for 3-Ply Surgical Masks, N95s