Why dining with friends makes you eat less: You’re less interested in the food on your plate

If you are trying to lose weight, inviting friends round for a dinner party might be a good idea.

Dining with other people could make someone eat less, a scientific study suggests. That is because the same part of the brain involved in social engagement also controls food cravings.

A study tested this theory in mice, whose brains work in a similar way to those of humans.

When scientists stimulated their social brain cells the animals were less interested in consuming a high-calorie treat.

They were also less interested in the treat when other animals were brought in for them to socialize with. 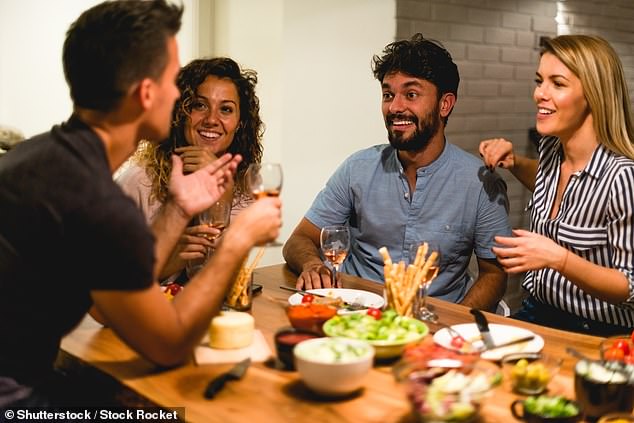 Dr Karl Deisseroth, senior author of the study, said: ‘We know social situations can inhibit the urge to eat. One example is the behaviour of people at different levels of dominance in a social hierarchy.

‘You’re not going to dive into that plate of ribs when you’re dining in the presence of royalty.’

Social behavior is controlled by the orbitofrontal cortex, which also plays a part when people are craving, seeking, getting and eating food. Experts believe the two brain circuits are linked and activating one may restrain the other one.

To test this they made the brain cells of mice react to light by injecting the animals with a light-sensitive protein. Pulses of laser light were used to trigger the ‘feeding’ brain cells of the mice which made them more keen to drink a high-calorie liquid from a spout.

But when their social brain cells were triggered, the mice spent less time licking up the tasty treat. When young, non-threatening mice were brought in to provide social interaction, the same thing happened.

WHY THIS MATTERS FOR ANOREXIA: DAMPENING THE SOCIAL NETWORK COULD HELP SUFFERERS REGAIN A DESIRE TO EAT

There are grave impacts of this neural relationship, warn the authors from Stanford Medicine.

Being lonely can lead to overeating because your brain has no social activity to focus on. On the other hand, the feeling of social pressure can lead to chronic under-eating – or rather, anorexia nervosa.

It means the study, published in the journal Nature, could help to create a drug for people with eating disorders.

Dr Deisseroth said: ‘People with anorexia report that a powerful driver, at the disorder’s onset, was feedback from others indicating they’d be rewarded for restricting their food intake.’

The relationship between these two brain circuits has eluded scientists for years – not helped by the fact that these neurons are scattered all over the brain. And they all look near-identical.

‘It’s not as if there is a cluster of “feeding” neurons and another cluster of “social” neurons sitting in two neatly labeled clumps in the orbitofrontal cortex, so you can just position an electrode in one or the other cluster and find out all you need to know,’ Dr Deisseroth said.

In this study, published today in the journal Nature, Dr Deisseroth identifies which neurons are feeding or social ones, as opposed to

The next step will be to distinguish the two.

If they or another research team can do that, it could pave the way to drugs to target the social network in anorexia sufferers, helping them to feel a desire to eat.

‘A key goal was to know which neurons actually matter for behavior. Now that we do, we can examine them more closely to look for, say, surface-protein markers or wiring differences that distinguish them from one another,’ said Dr Deisseroth.

‘If there are any distinctions like that, it will deepen our understanding of how competing drives are negotiated among neuronal cell types in the cerebral cortex – and could even lead to pharmaceutical interventions that reduce social inhibition of food consumption among people with anorexia.’

First in line for Covid vaccine? Some US health care workers say no