The Dietitians Association of Australia (DAA) has released a report examining the cost of poor nutrition to Australians’ health, calling on the government to update its National Nutrition Policy.

The report, titled Nourish Not Neglect: Putting health on our nation’s table, highlighted that less than one per cent of the population eat according to the Australian Dietary Guidelines, and 67 per cent of adults are overweight or obese, a rise of more than 10 per cent in two decades. 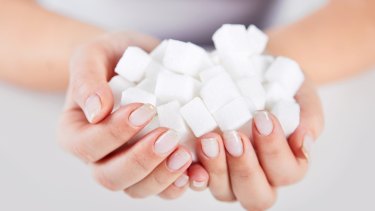 The DAA warns we need to act fast to fix a big problem.

“Even more alarmingly, this figure is expected to increase,” the report stated. “Projections suggest that by 2025, 83 per cent of men and 75 per cent of women aged 20 years or older, will have overweight or obesity.”

This is significant given 10 per cent of the total burden of disease is attributed to poor diet, with an additional 8.5 per cent attributed to obesity, costing the country billions of dollars each year.

Specifically, a new policy needs to address issues like poor nutrition in aged care facilities, where one in two residents are malnourished and just $6 a day is spent on food, said DAA CEO Robert Hunt.

It also needs to address menus in school canteens and the junk food intake of Australians, which currently accounts for more than a third of our daily energy intake and 58 per cent of our daily food budget.

Hunt said, although there are positive initiatives like food labelling and healthier school canteens in some states, they are happening “in isolation”.

“Good things are happening in a piecemeal way but there needs to be a coordinated approach,” he said. “We’ve lost our way and if we don’t fix it there won’t be a population to worry about.” 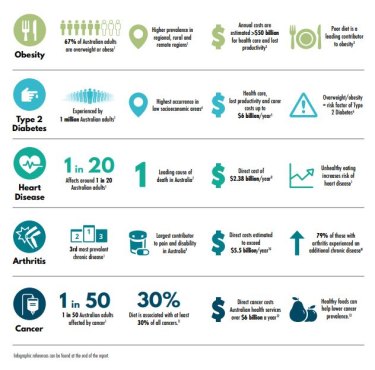 This graph from the DAA report shows the cost of poor nutrition.

A “coordinated approach” would include a public education campaign about the health impact of poor diet as well promotion of the dietary guidelines, greater access to nutrition advice, restricting or removing junk food advertising, as well as ensuring “limited exposure to temptations” in public places.

“Where’s the public education campaign that was there for AIDS and for tobacco?” he asked. “Diabetes, heart disease, arthritis and cancer are four of the largest chronic disease killers in this country. Some of it can be changed by a change in diet.”

According to the report: “If Australians had eating patterns that aligned with [the dietary guidelines], the total burden of disease would reduce dramatically, with heart disease reducing by 52 per cent, type 2 diabetes by 34 per cent and diet-related cancers by up to 37 per cent.”

While Hunt agreed Australians should be able to choose what they consume, he said, “It is the government’s role to make sure the choice is coming from an informed point of view.”

In response to the DAA report, a spokesperson for the Department of Health said the government recognised "the importance of a healthy diet" for healthy body weight and prevention of non-communicable diseases.

They listed the department's efforts to implement “effective preventive health policies and programs”. These included the Australian Dietary Guidelines, The Health Star Rating (HSR) system, The Healthy Food Partnership, The Healthy Weight Guide website, the National Strategic Framework for Chronic Conditions and the development of a National Obesity Strategy, for which a summit is being held this week.

“The purpose of the Obesity Summit will be to identify and prioritise actions to reduce the impact obesity has on the Australian community and health system, including efforts in primary and secondary care prevention reflecting that prevention occurs in health and other settings," the spokesperson said. "Nutrition policies and programs will be a key focus of the summit.”

The spokesperson did not address questions about an updated National Nutrition Policy.

Hunt said he fears not enough is being done. The Australian Dietary Guidelines are due for review but he said it is “almost useless” unless you get the message out to the public.

“They don’t know they exist: we’re pushing the proverbial up a hill to get [the message] to 26 million people,” Hunt said.

“Our message is if we don’t get a policy in place we won’t exist in 50 years time. Already 67 per cent of people are overweight or obese and they are key indicators of the top four chronic diseases – you do your own math.”

Finding their voice: For trans people, vocal modification can be key