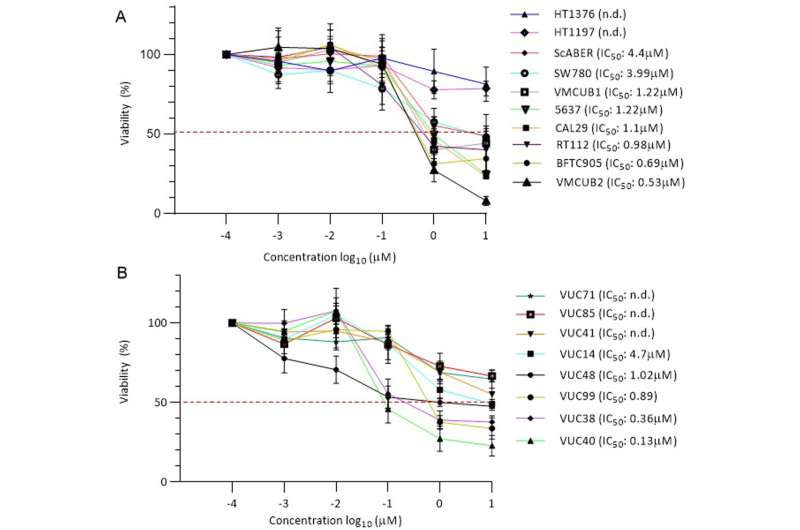 Hundreds of chemical compounds were screened on cell cultures representing different stages and subtypes of bladder cancer and several promising agents with inhibitory (growth-inhibiting) effects were identified. A drug used to treat childhood leukemia was found to have good efficacy in two specific types of bladder cancer. The study, which was conducted at MedUni Vienna, was recently published in the journal European Urology.

Working in collaboration with the CeMM Research Center for Molecular Medicine of the Austrian Academy of Sciences (Stefan Kubicek’s working group), a joint study group at the Department of Urology led by Shahrokh Shariat and Walter Berger at MedUni Vienna’s Center for Cancer Research screened various drugs. They investigated the effects of more than 1,700 chemical compounds on 23 commercially available cell lines representing different stages and subtypes of bladder cancer. The scientists were able to identify over 470 substances with inhibitory (growth-inhibiting) effects. These included a large number of drugs already used for cancers and also drugs for treating malaria, parasitic diseases and various mental disorders, for example.

One of these compounds, clofarabine, an antimetabolite currently used as a treatment for childhood leukemia, was studied in more detail. For this, the researchers developed models from patient material representing different types of bladder cancer. In addition to “conventional” urothelial carcinomas, they were also able to establish an animal model for sarcomatoid carcinoma. This is a rare subtype of bladder cancer, for which there is currently no effective chemotherapy. “We found that clofarabine induced complete remission in mice with conventional urothelial carcinoma, while in the animals with sarcomatoid carcinomas it led to massive, sustained shrinkage of the tumors without causing any apparent side effects,” said first author Iris Ertl from the Department of Urology, describing the results.

Use in clinical trials for the treatment of metastatic bladder cancer

How much salt we should take a day max to us?

Possible link between infant gut microbiome and development of allergies