One of Australia's top brain experts says that not only do protective helmets do nothing to stop brain trauma, they can actually cause athletes to behave more recklessly on the field.

Dr Alan Pearce, a neuroscientist and associate professor at La Trobe University, said that despite writing and speaking about the issue repeatedly, there are still plenty of people who believe that wearing headgear on a football field lowers the risk of concussion. 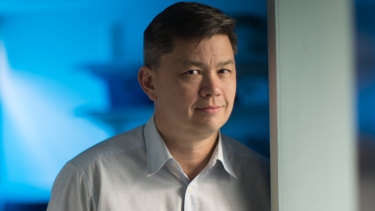 “The message is still not getting through”: Dr Alan Pearce is one of Australia’s leading experts in brain injuries.Credit:Simon Schluter

"If I was meeting people every day, I’m sure I’d get a question about this every day," Dr Pearce said. "The message is still not getting through."

Wearing headgear will help prevent injuries to the skull and ears, but the brain remains vulnerable.

Dr Pearce said that while the cerebrospinal fluid around the brain gives the organ buoyancy and protects like a shock absorber on low-impact contact, the fluid is actually a hindrance if the intensity increases.

"When you get to higher levels of force, the sac of fluid actually works against you – like a car without a seatbelt," he said.

"If you get hit in the head, the brain keeps moving – and changes direction from one way to another. So you get shearing and stretching of the brain cells. Helmets don’t stop that from happening – and that's why they’re ineffective against concussion."

The other problem with helmets, he said, is that people tend to take more risks when they have a veneer of protection. He cited a US study which found that brain injuries in American football dramatically increased in the 1970s when hard helmets were introduced – because players began to recklessly fly into contact head-first.

Countries like the US, Canada and the UK are far ahead of Australia when it comes to research into brain injuries, he said.

"We need to take this issue far more seriously than what we are at the moment, despite the rhetoric. You look at the amount of scientific research being published, we’re not even close."

Will & Jada Pinkett Smith Had Intervention for Son Jaden After Weight Loss: 'He Was Wasting Away'

How to live longer: What is the best diet to follow for longevity?