The end of chemo’s brutal side effects? Scientists create 3D-printed ‘drug sponge’ that is inserted into the veins to mop up the leftovers of the powerful drugs after treatment

A 3D-printed ‘drug sponge’ could offer a potential solution to chemotherapy’s brutal side effects, scientists claim.

The device – based on absorbers used to remove chemicals from petrol – filters the powerful drugs out of the blood once it has treated tumours, so that healthy cells do not suffer.

Early tests on pigs showed the ‘chemofilter’ soaked up 64 per cent of a liver cancer drug, doxorubicin, injected upstream.

It could save millions from the gruelling side effects of the treatment, including hair loss, nausea, fatigue and diarrhoea.

Higher doses of the drug could also be administered, making treatment faster, the researchers now believe. 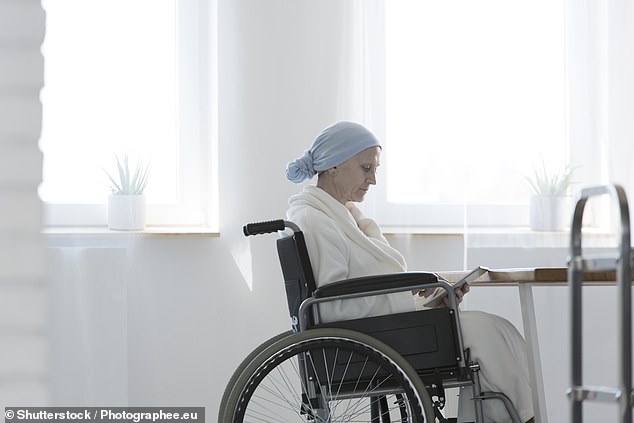 A 3D-printed gadget could offer a potential solution to chemotherapy’s brutal side effects, scientists claim, as well as allowing for higher dosage of drugs to be administered

The researchers from University of California at Berkeley said the development was ‘a significant step forward’.

Chemotherapy is typically accompanied by major side effects including nausea, vomiting, hair loss, suppression of the immune system, and anaemia.

Although chemotherapy drugs – of which there are hundreds – can kill cancer cells effectively, it effects the normal working of the body.

Typically, more than 50 to 80 per cent of the injected drug does not reach the tumour but enters the body’s circulation, the researchers said.

They hope that this device will slow, or even stop the healthy tissue from being effected.

The researchers used a 3D printer to make tiny cylinders, no more than 3mm in length, made of poly(ethylene glycol) diacrylate.

HOW DOES CHEMOTHERAPY CAUSE SIDE EFFECTS?

Cancer cells divide much more often than most normal cells. So chemotherapy damages cancer cells and can destroy them.

But some types of normal cells divide very often too. This happens in tissues that need a steady supply of new cells, such as the skin, hair and nails.

Chemotherapy can also damage those cells, and this causes side effects. But the damaged normal tissues can repair themselves and recover.

The most common side effects are to the nerves, tiredness, infections, hearing, breathing, appetite and drinking, kidneys, liver, heart and lungs, fertility, sickness, hair, skin, nails and the brain function.

Most chemotherapy side effects are temporary and disappear once your treatment is over.

But for some people, chemotherapy can cause long term changes in the body.

Some of these changes may happen months or many years after the treatment has finished.

Late side effects can include early menopause, infertility, changes to feeling in your hands and feet (peripheral neuropathy) and heart and lung problems.

Inside the cylinders was a square lattice structure that would allow blood cells to pass through it.

However, a coating, called copolymer, applied to the lattice attaches to the chemotherapy drug to stop it passing through.

The researchers, led by Professor Nitash Balsara, designed the device to test on pigs. They spent a year perfecting the method.

‘Absorbers are used in petroleum refining to remove unwanted chemicals such as sulphur.

‘Literally, we’ve taken the concept out of petroleum refining and applied it to chemotherapy.’

Doxorubicin is a chemotherapy drug used for many different types of cancer, also known by its brand name Adriamycin.

They tested the absorbers in three pigs, inserting them into a vein. The findings were published the in American Chemical Society’s journal Central Science.

When they injected doxorubicin into the same vein, the drug flowed in the bloodstream, reaching the device.

By measuring the doxorubicin concentration in the vein afterwards, the researchers determined that it captured about 64 per cent of the drug from the bloodstream.

It is not clear to what extent this would reduce the lingering side effects. But it was noted that the device did not cause side effects on its own.

When developing the device, the researchers were aware of the risk of thrombrosis, when blood clots in a vein.

The authors said: ‘Problems related to blood clots, vein wall dissection, and other biocompatibility issues were not observed.

‘This development represents a significant step forward in minimizing toxic side effects of chemotherapy.

The device could open a new route to help patients fight cancer, enabling reduced side effects or an increased chemotherapy dose, the researchers say.

‘Although much work remains, we believe that the present study opens a new route to help patients fight cancer by minimizing drug toxicity, and better treat their disease and improve survival by enabling high-dose regional chemotherapy,’ the paper said.

Potentially they could also be used to soak up other dangerous drugs, such as high-powered antibiotics that are toxic to kidneys.

Chemotherapy is a vital part of treatment for cancer, with 28 per cent of UK patients needing it, according to Cancer Research.

Each year, about 650,000 US cancer patients receive chemotherapy in an outpatient oncology clinic.

Countries denied access to medicines and vaccines they help develop

Mapping the mouse brain, and by extension, the human brain too