Reassuringly normal, Fearne Cotton is hunting for the wire for her laptop when we meet over zoom. ‘Sorry, one minute…the battery is nearly dead,’ she smiles.

A presenter on prime-time TV and radio since she was 15, Fearne’s fearless honesty about her own journey with crippling anxiety and panic attacks has led her to build the Happy Place community and brand, which ‘aims to be a simple, straightforward space where users can practice self-care and well-being.’

There’s an app and a festival, as well as the chart-topping iTunes podcast Happy Place which has over 84 million downloads.

Today, she’s running her empire from her kitchen table, perched on a stool in the kitchen, with the lettering ‘Let’s Stay Home’ painted behind her in large white lettering. Her husband who just happens to be Jesse Wood, the son of Rolling Stones guitarist Ronnie Wood, wanders in grinning, waving the lap top wire, and just like that we’re powered up once more.

‘I sometimes worry that I spend too much time trying to define or understand happiness,’ Fearne says. ‘And the more I try, the less I understand it, and the more hopeless or clueless I feel about it.’

We’re here to talk about Fearne’s Happy Place podcast, which has just reached its 200th episode milestone and has featured personal conversations between Fearne and a range of guests – everyone from Robbie Williams and Minnie Driver to Dame Kelly Holmes and Richard E Grant.

Here we talk to Fearne about overcoming anxiety, trauma and building a happy life.

What makes you happy?

In my own life as I’ve got older, I’ve settled into a more grounded happiness, because I think you do care less about what other people think, and I know myself better.

I’m less caught up in what everyone else is doing and thinking and saying. I’ve got a better understanding of what makes me feel good. It’s simple things like having slept well, eating well, doing things that make me excited. I love having a job where I think I can always improve.

How important is self-awareness?

Self-awareness is integral to our happiness. If we’ve got self-awareness, and a proper compassionate understanding of our childhood, we’ve got a better chance of not getting triggered by our past.

That doesn’t mean if you had a terrible childhood, you have to forgive everything, and be at peace with it. But it’s valuable to be able to dig around in it; to explore your past and to work out how that’s informed who you are today.

It’s also important to have awareness of how you react to things. I have delved into my past and it’s helped me become aware of why I’m feeling like I do or why I’m saying certain things or why I’m reacting in a certain way. It’s humbling to take a step back and see yourself objectively. It allows you to reject all the noise and focus on what makes you happy.

I’m less caught up in what everyone else is doing and thinking and saying. I’ve got a better understanding of what makes me feel good.

Do you really believe that it’s possible to heal our past traumas, and move on?

I interviewed my friend Donna Lancaster for the podcast. She’s a therapist, whose life’s work has been looking at trauma and overcoming it. I don’t think it’s easy but the most powerful step is the first one: acknowledging and having awareness that there was trauma, or there were challenging times in your past. Because a lot of the time we just say: ‘Oh, it’s fine, it’s in the past, it doesn’t matter.’ Or we’re just too scared to look at it.

Donna encourages us to look at it. She puts it perfectly in the podcast where she says that a herd of buffalo run into the storm, rather than run away from it. To heal, she says, we need to be like the buffalo and be willing to turn into the storm and face the troubles from our past. That’s where the healing begins. 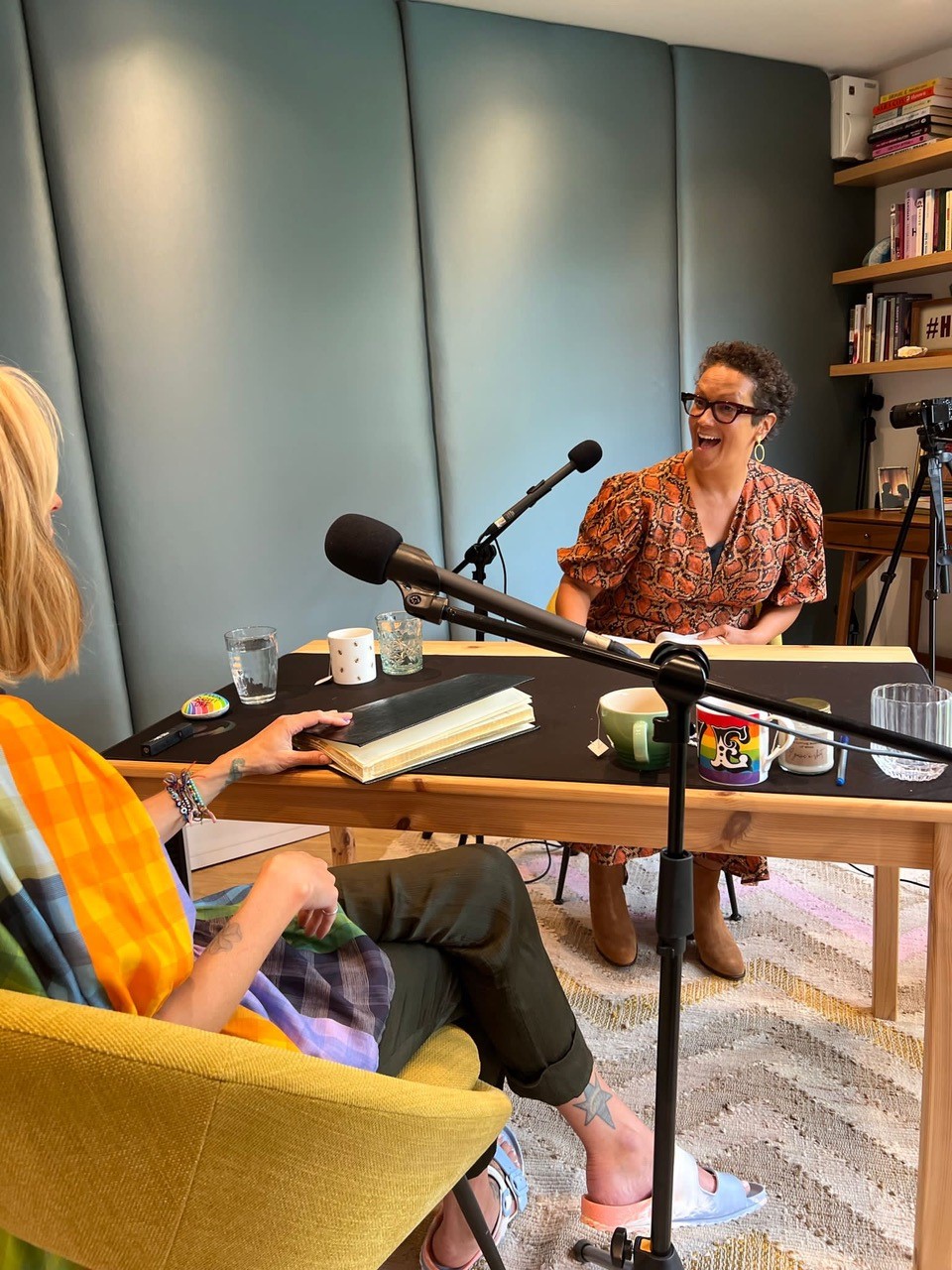 Once you’ve started healing, that’s the point of no return. Once you’ve ripped the plaster off, you’re halfway there. I do think it’s possible to heal from trauma. I’ve met countless people who have come from the most awful situations, and now they are at a place where they can be excited about life again. They’re not stuck in the past and that is deeply liberating.

What are the biggest life lessons you’ve learned from your podcast guests?

When I interviewed Jada Pinkett Smith she talked about emotional independence. At the time, I didn’t know what she meant. But I totally get it now.

In my 30s, I was too quick to reach for help. Reaching out for help is amazing and integral at times but I got to the point when faced with any problem, I would feel I had to ring or text someone and needed for someone to tell me what to do. I rarely figured out problems on my own or sat with my feelings.

As I’ve got older, I am now able to pause, step back and ask myself – does this really matter? If it does matter, I ask myself, why does it matter? What are the feelings that are coming up, but now I’m able to sort things out a little more easily on my own.

Who have you interviewed on the podcast who has had a profound effect on you?

Björn Natthiko Lindeblad was a Swedish economist, lecturer, and Buddhist monk. I interviewed him when he had been diagnosed with a terminal illness. I don’t think I’ll ever have a chat that powerful again in my life.

I felt uncomfortable talking about death to someone who knew that it was very close on the horizon. He talked to me knowing that he probably wouldn’t hear the podcast being aired. I was deeply honoured that with the precious time he had left, I had an hour of time with him.

As I’ve got older… I’m able to sort things out a little more easily on my own.

For 17 years Björn lived in Thailand’s jungle as a forest monk. He learnt how cultivating a feeling of calm can encourage clarity of thought, that he prefers walking meditation to sitting, and that freedom can come from not being bound to material possessions. His book I May Be Wrong is life changing.

If someone hasn’t listened to your podcast and wants a mood boost – which episodes would you recommend?

I loved a recent episode with singer Sam Ryder, who has some grounded advice about never giving up on your dream. He came to success in his 30s, late in terms of the pop world. But he never gave up. He worked on a building site, became a wedding singer but he never gave up on his big dream.

I also loved the Alicia Keys episode, which was during the first lockdown. She expressed gratitude for the skill that she clearly knows that she has, but teamed with discipline and kindness, it’s led her to be a superstar.

Which podcast has inspired you to make changes in your own life?

I’m a massive fan of writer Elizabeth Gilbert, who wrote Eat, Pray, Love. She talked about sitting at the bedside of her late partner Rayya who was critically ill. Liz was checking her inbox full of emails from differing people in her life and work life –  friends of friends and cousins of friends of her aunties’ dog, her best mate’s next-door neighbour, and she just pressed delete on all of them.

None of it matters, she said. I remember that often when I’m feeling overwhelmed. She gave me perspective. If I deleted all of my emails right now, the world would keep spinning.

It seems like small thing, but it’s really helped with my general stress levels, which makes my home hopefully a nicer place to be.

You’ve talked publicly very much about your anxiety. How are you currently managing it?

I am really well right now. I have been fortunate enough to make decisions that have lessened my anxiety – like giving up my Radio 1 show. It took a long unravelling process of realising that TV and radio doesn’t have to define my identity.

By taking a new direction, it doesn’t have to mean that I’m a failure, or that I’m not good enough. I simply don’t want to have a panic attack or feel like that anymore. For four or five years I kept going and I wouldn’t sleep all night, heart racing, adrenaline surges, taking beta blockers, which the doctor prescribed me. I came to the conclusion that if I’m doing a job that requires me to take beta blockers to sleep, I don’t think I should be doing that job.

It took a long unravelling process of realising that TV and radio doesn’t have to define my identity.

How do you look after yourself on a daily basis?

I exercise every day. It doesn’t have to be a workout. My son and I have started doing a mile run after school every day, and we get to chat about school. I love it.

I also have to eat well. I had 10 years of eating disorders in my 20s and I don’t want to go back there. I have to follow what makes me feel good, which is going to bed early and reading a book and not pushing myself to do stuff I don’t want to do, like going to parties even if that annoys people.

I only want to hang out with people that make me feel good. I’ve got small friendship circle and most of them are from when I was a kid. My six best mates I’ve known since I was five. I also don’t care so much about what others think.

What do you mean?

When I was younger, I was focused on outside opinion. What does this person think? And what does that boss think? And what does the audience think? Now I try and give that much less attention. I haven’t cancelled it out, but I don’t take it as seriously. And that, for me was quite a big source of anxiety, because it can be quite nasty out there. Instead, I’m focusing on the things that light me up and what brings me joy.

How to be happy:

If you were going to give advice to your younger self…

I’d say follow your gut because there’s so many times I didn’t do that, and I probably could have saved myself a lot of pain and heartache if I had.

What’s the one thing to give up if you want to be happy?

Give up the idea that you have to get the perfect job, perfect partner and life. When I’ve interviewed people for the podcast, they’ve either dropped out of school or didn’t know quite what they were doing, got lost, faced adversity and bobbed up the other side of it and did something brilliant with that life experience.

Hand sanitizer is selling out, but soap is a much better defense against the coronavirus

Baricitinib Effective for Moderate to Severe AD Out to 52 Weeks