New research led by Patrick McGann from Walter Reed Army Institute of Research found the first cases of the B.1.1.220 variant with an E484K mutation on the severe acute respiratory syndrome coronavirus 2 (SARS-CoV-2) spike protein. Their results suggest the variant recently emerged as B.1.1.220 was not found in New York before December 2020. Still, it quickly made up 25% of coronavirus strains in late January and early February.

“Detailed genomic analyses suggests that the mutation has emerged independently in at least two different B.1.1.220 strains in this region.”

The study “Emergence of the E484K Mutation in SARS-CoV-2 Lineage B.1.1.220 in Upstate New York” is available as a preprint on the medRxiv* server, while the article undergoes peer review.

Concerns over the E484K mutation

The E484K mutation has been previously identified in other variants of concern — such as B.1.351 and P.1 — and has been implicated in variants’ improved transmissibility and ability to cause severe infection. The mutation has also been known to be resistant to neutralizing antibodies.

Vaccine-induced neutralizing antibodies have also been less effective in variants with this mutation. The Novavax vaccine reported an 85.6% effectiveness against the B.1.1.7 variant — which does have the E484K mutation — but this dropped to 49.4% to 60% when tested against the B.1.351 variant in South Africa.

With a massive vaccination campaign underway in the United States, more genomic surveillance is needed to identify new variants of concern and swiftly limit its spread. “It will also be important to assess how the E484K mutation affects protection by vaccines against this specific variant that lacks the other mutations in the B1.351 and P1 strains,” wrote the researchers.

How they did it

Starting from June 2020, researchers collected nasopharyngeal swabs from five hospitals in the Finger Lakes region. They tested 438,107 samples, with 25,468 patients testing positive. The positive samples had their RNA extracted for genomic sequencing.

However, the team did find the E484K substitution in recent testing of 20 samples from 19 patients between January 27 and February 7, 2021. About 5 samples, 1 male and 3 females with an average age of 85, had E484K. All patients had no recent travel history in the past six months, and all recovered from infection.

The five strains were related to the B.1.1.220 variant, which the researchers say make up about 2% to 7% of total COVID-19 cases in the Northeast United States. The strain with the E484K substitution also had a four amino acid substitution — R203K, G204R, P314L, and D614G — that is the hallmark for this lineage.

When the researchers performed a whole-genome high-resolution single nucleotide polymorphism (SNP) in the five samples, they found 1-4 SNPs separated most samples. 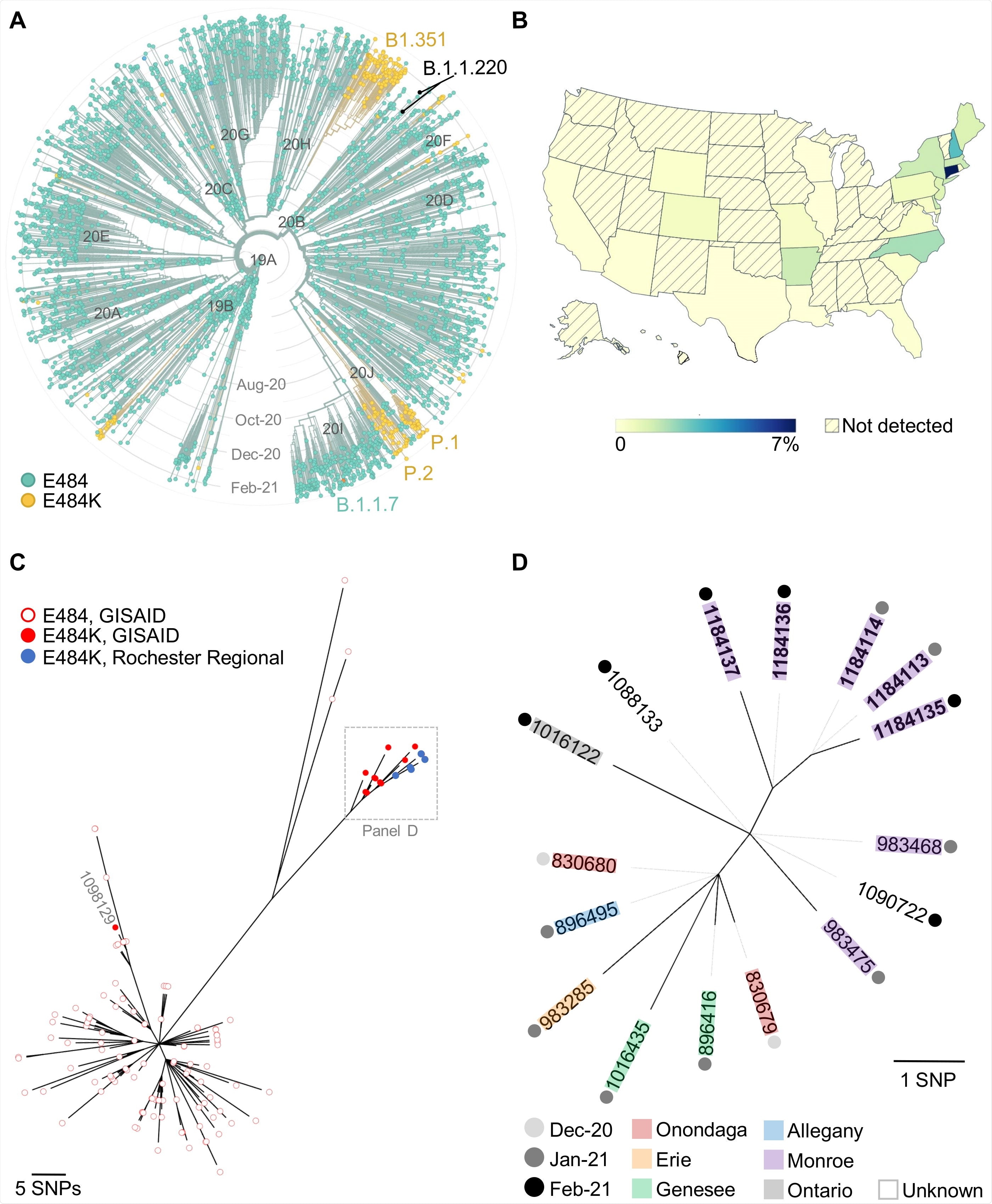 Independent rise of B.1.1.220 variant with E484K substitution in different NY areas

An analysis found another six B.1.1.220 variants with the E484K substitution in New York with one open software and another six with the GISAID database. These variants differed by 25 to 29 SNPs between 16 samples from Central and Western New York and a New York City sample. The researchers suggest the new variant arose independently at least twice in the New York region based on the data.

Further evidence of the 16 samples showed high-genetic relatedness with 0-7 SNPs. This gives more evidence that the B.1.1.220 E484K variant recently materialized but is spreading rapidly as samples were collected in at least six different counties between December and February 2020.

medRxiv publishes preliminary scientific reports that are not peer-reviewed and, therefore, should not be regarded as conclusive, guide clinical practice/health-related behavior, or treated as established information.

Jocelyn Solis-Moreira graduated with a Bachelor's in Integrative Neuroscience, where she then pursued graduate research looking at the long-term effects of adolescent binge drinking on the brain's neurochemistry in adulthood.

Statins side effects: The 3 muscle conditions that could be triggered by the pill – signs