The spritz of aftershave that could’ve killed me…because I’ve got a FOOD allergy!

A simple hug from her father left a then five-year‑old Julianne Ponan fighting a life-threatening allergic reaction.

As Julianne, now 29, from Walton-on-Thames, Surrey, recalls: ‘As soon as my dad, John, hugged me, my lips started to swell and white spots appeared on my face. My throat started to close and I couldn’t breathe — within minutes I collapsed. An ambulance was called, and it was the paramedics who administered adrenaline via an EpiPen.

‘As I was recovering in A&E, my dad hugged me again, which brought all the symptoms back. I could have died.’

The problem? It turned out to be her father’s new aftershave. 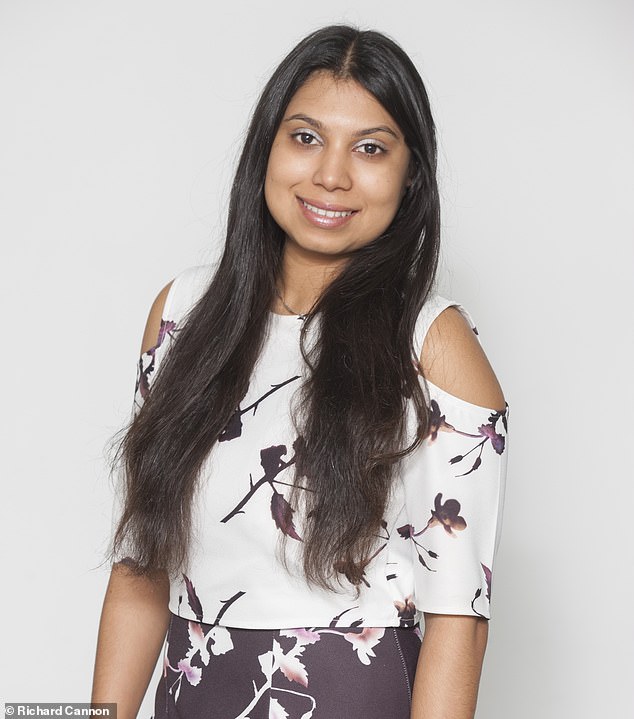 Be careful: Julianne Ponan, from Walton-on-Thames, Surrey, was left fighting for her life after she suffered a severe allergic reaction to her father’s aftershave

Julianne had been diagnosed with severe allergies at the age of two — she is allergic to nuts, sesame and other seeds, chickpeas and lentils. Her first attack had been triggered by eating some cookies at nursery that contained nuts.

Since then, her family has always been careful about reading food labels to ensure she was safe. But it is not just eating that can be a problem.

For what makes the lives of people who have severe food allergies even more stressful is that many everyday toiletries, such as shower gel, toothpastes and cosmetics, contain common allergens, such as almonds and peanuts.

Unless those with allergies are scrupulously careful about the types of products they use, they could find themselves with serious skin reactions.

The Anaphylaxis Campaign cites a teenager who is allergic to fish suffering severe dermatitis after using eye make-up, which contained fish scales to produce a glimmer effect.

Much worse could happen if they inadvertently swallow just a tiny amount of face cream, for example, because it could cause a potentially fatal reaction.

Even breathing in the fumes can be risky, as Julianne’s experience with her father’s aftershave revealed. Julianne and her family knew the risks of her using such products, and she tried to avoid the substances she was allergic to in both food and her cosmetics. 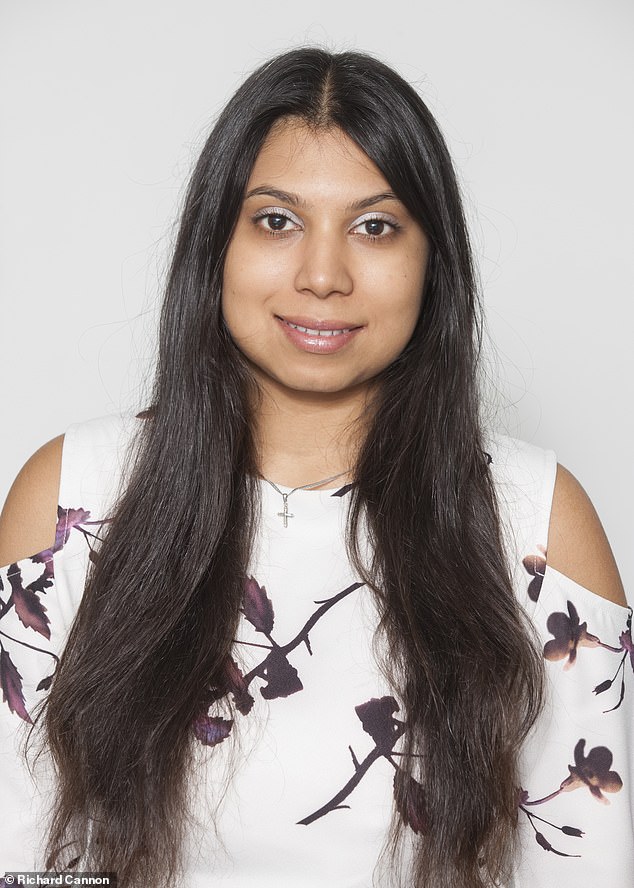 High alert: Julianne had been diagnosed with severe allergies at the age of two — she is allergic to nuts, sesame and other seeds, chickpeas and lentils

But John, 55, a businessman, thought he was safe to wear a new aftershave because Julianne had shown no reaction to perfumes or aftershaves until that point. Her parents would normally check the ingredients, but did not realise the new brand contained seed oil.

And it isn’t just perfumes that are potentially dangerous for Julianne, who runs her own company, Creative Nature, making allergen-free snacks. Earlier this year, she was at a hotel and used liquid soap in the loo. Within seconds, a white bubble-type rash broke out on her hands and her throat started to close.

‘I was trying not to panic while frantically going through my bag to get the Piriton — an antihistamine. It can usually bring down the reaction within 20 minutes, and means I don’t always have to use an EpiPen.

‘It turned out the soap contained almond oil, so it worries me when there is no labelling. I’ve been in hotel spas where I’ve had to run back to my room because of the fumes from coconut coming from the showers.’

The only way to ensure a product is safe to use for an allergy sufferer is to read the labels on every single item before purchasing, which takes a lot of time and patience, and very good eyesight, as I discovered when buying toiletries recently.

My daughter Thea, 20, has various allergies including nut and peanut, and orders whoever is doing the shopping to double-check toiletry ingredients before putting anything into the trolley. She then checks the contents online as we unpack the bags, just in case there has been a recent ingredient change. It can add an hour to a shopping trip, with us straining to read the tiny print. 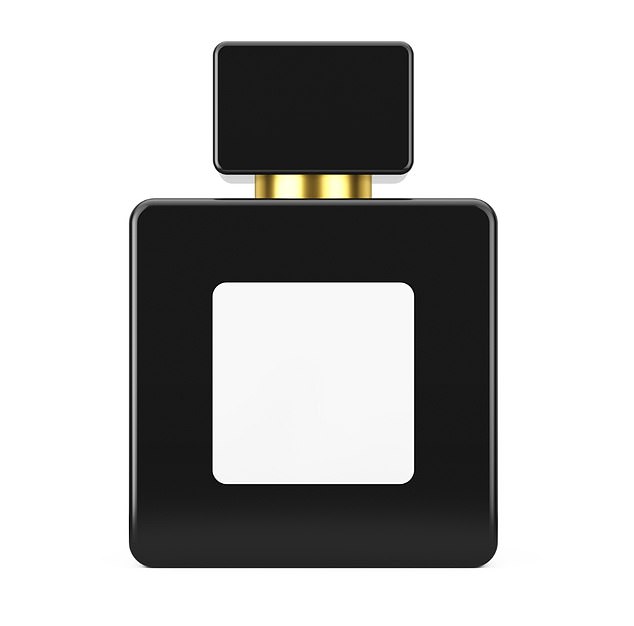 Did you know? One problem is that some names are listed only in Latin: for example, Arachis hypogaea means the product contains peanut oil and Piscum lecur is fish liver oil…

Under the International Nomenclature of Cosmetic Ingredients (INCI), all cosmetics, toiletries and make-up must have a full list of ingredients on the packaging.

All countries in the EU and the U.S. adhere to these guidelines.

One problem is that some names are listed only in Latin: for example, Arachis hypogaea means the product contains peanut oil and Piscum lecur is fish liver oil.

Chris Flower, director-general of the Cosmetic, Toiletry & Perfumery Association (CTPA), which represents the UK industry, says the only legal requirement is that manufacturers highlight certain fragrances, but not food, allergens.

‘This is a common complaint from those who have nut allergies. We understand that allergy sufferers do not appreciate “just in case” warnings such as “made in a factory where nuts are present” when there is unlikely to be a problem.

‘However, this would be a commercial decision for an individual company. Where such labels are not mandatory, some companies may apply them and others may not. This would mean that the absence of a warning was not a guarantee of suitability.’

‘Another concern is that people might be discouraged from consulting the ingredients list if they come to rely on warning labels alone,’ he says.

Ingredients on toiletries are listed by their Latin names. Here we list some of the most common allergens:

My personal view on this is based on watching my otherwise rational daughter panic about what is contained in normal, basic things such as toothpaste and shampoo.

I believe the industry should put warnings in English on all the packaging.

Admittedly it is relatively rare for someone to die from using these products, but as we have seen with recent tragic incidents involving food, no company wants to be the one that decided not to label fully when a fatality occurs.

Manufacturers maintain many products safely contain nut oils because they say the oils have been so refined in the production process that little, if any, of the allergens remain. However, Julianne is living proof that there is still a risk. She challenges the CTPA assertion that allergy sufferers find specific English labelling confusing. She wants more labelling — the clearer, the better.

Since that first anaphylactic reaction, her parents, John and Yvette, 59 — neither of whom has any allergies — have spent years having her tested for other danger foods. The first were at a hospital, but as Julianne experienced other symptoms, she was referred to an allergy specialist who would perform a succession of blood tests and eating challenges so they could rule out other allergens.

When her sister, Carissa, was born six years later, she was found to have similar allergies, so they were doubly careful.

‘I insist that whoever lives or comes to stay with me can only use the same make of product I use, whether it is shower gel or creams,’ says Julianne. ‘I’ve used the same Chanel perfume since I was 15 and I won’t change it. Even when it runs out I take the original packaging to the shop and check the ingredients haven’t changed.’

‘When I go through Duty Free before a flight, I now pull my clothing over my face and sprint to the gate because perfumes are being sprayed around and I can’t take that risk of them triggering an allergic reaction.’

Thea’s allergies led her to a U.S.- based company, Kiss Freely, which has products free of 18 allergens, including milk, egg, peanuts and fish. It was started by Jennifer Kurko, whose daughter, now ten, broke out in hives after a kiss from her mum when she was two because Jennifer was wearing lip balm.

She knew Amaia had food allergies, and thought she had cleared the house of all ingredients that could trigger a serious reaction.

‘It was the most horrible feeling to realise my kiss had harmed her,’ says Jennifer, who lives on Long Island. ‘A few hours later, after the hives had gone down, my husband suggested I read the ingredients in my lip balm. And there it was in tiny print: almond oil.’

So for allergy sufferers will an upside to Brexit be the return of English on packaging? The EU is the regulatory body on ingredients. Post-Brexit, could the UK decide for itself?

No is the answer. According to the CPTA, the INCI agreement will remain — and so will the Latin.

Top family-friendly online workouts to do in lockdown

Hope on cervical cancer: women can now be screened every five years