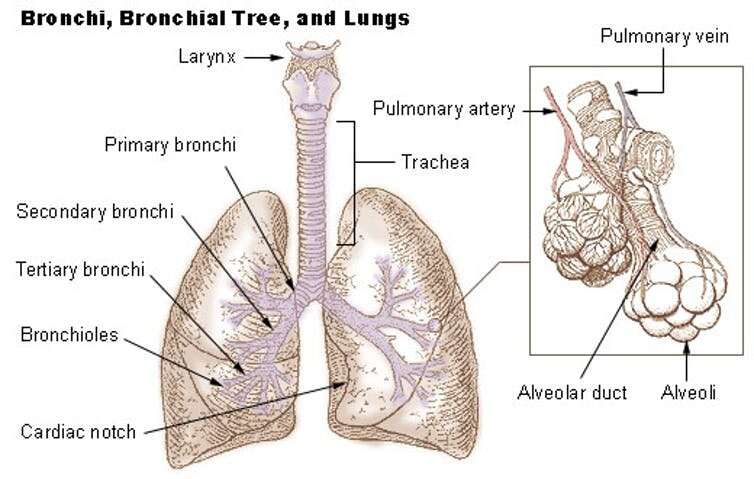 When we breathe, air enters through these openings before travelling into the pharynx, the space at the back of the nose and mouth, and then down into the larynx and trachea in the neck, before descending into the lungs through the bronchi, the tubes that carry air into the lungs, the bronchioles and eventually into the alveoli, which is where gas exchange occurs over a surface area of about 75m².

All surfaces of the body are lined by specialised cells that protect us against pathogens, and the specialised type of cells change depending on where they are in the body.

Specialised cells that line the respiratory system produce a sticky substance called mucus, which catches bacteria, viruses and dust-like particles, which prevents them from getting into the tissues of the body. These cells also have another adaptation: tiny hairs called cilia. These cilia beat, but this beat is not random, it is a co-ordinated wave-like rhythmic beat, from the bottom of the trachea to the top, known as the mucociliary escalator.

This mucociliary escalator is a second line of defence. It enables the body to get rid of the particles that are trapped in the mucus by moving them to the top of the trachea before either coughing them out, or swallowing them.

When either of these defences fail, the infecting agents can get into our tissues and cause an infection. These are usually divided into upper or lower respiratory tract infections, with the vocal cords forming the border between the two. In either region, the infecting agent can be viral or bacterial.

No pain no gain

“Soreness” is a good thing, despite your throat being red and inflamed. This redness and inflammation comes from blood vessels dilating – letting more blood flow into the infected tissues which, in turn, brings more white blood cells in to fight the infective agent. The presence of the white blood cells causes a doubling of efforts in the tissue, further increasing the redness and temperature of the tissue.

This is all part of the body’s mechanism to destroy viruses, as viruses struggle to replicate and are destroyed at these increased temperatures. And this increasing of body temperature has allowed vertebrates to survive against infecting pathogens for hundreds of millions of years.

Why do we get sore throats and a runny nose, usually together? The short answer is they’re connected. The mucus that protects our airways is also produced elsewhere in the body, including the gastrointestinal system. In total we produce somewhere in the region of 1.5-2 litres on a healthy day that is swallowed. We are constantly told to drink plenty when we have a cold, flu or other respiratory infection. This is because the production of these fluids increases to try and flush the infecting agent out of the body.

Snot is the name given to mucus that is produced in the nose and the sinuses connected to it. Sinuses are the things that make our head and face hurt when we have colds. Snot is produced on all the surfaces within the sinuses and runs out of the nose. The mucus is produced, in relation to the respiratory system, in the upper airways, whereas phlegm comes from lower down the airways and is usually coughed out.

Coughing is a protective mechanism, it serves to clear the airways from liquid and other substances, to ensure that air can flow freely into the airways. Coughing rapidly forces air out of the lungs to try and clear any obstructions, propelling them into the mouth or pharynx where they can then be swallowed.

Coughing is instigated by the detection of anything in the trachea that shouldn’t be there. And the coughing reflex is triggered by highly sensitive nerves that sit among the lining cells of the upper part of the trachea that detect things that shouldn’t be there. With runny noses, snot doesn’t just run out of the nose, it also runs backwards towards the throat and in here it can cause a cough.

However, in some instances, the clearance fails and infectious agents make it into the lungs, prompting things such as bronchitis, an inflammation of the bronchi. Occasionally, the coughing mechanism fails to clear foreign objects. One extreme case was the person who had a Playmobile road cone lodged in his bronchi for 40 years, which was only discovered after he sought treatment for a persistent cough that he’d had for over a year. The cough combined with a shadow in his lung initially suggested that it may have been cancer.

Coughs can persist for a while after the infection has gone; you may feel better but the cough lingers. This is because the virus responsible for causing it results in the airways becoming swollen and overly sensitive as part of the body fights back. It takes longer for the tissues in the respiratory system to settle, hence the cough hanging around longer than you might want it to.

However, persistent sore throat was recently flagged as a warning sign for laryngeal cancer. This is a logical link given that bacterial, viral or allergic causes usually respond to treatment or the body overcomes them, so a persistence or worsening of symptoms could be associated with cancer. Most coughs are harmless though and will subside as the body fights the infection, but those that persist beyond a reasonable time should be checked out by a qualified medical professional.

Visceral fat: The hot drink that could burn the harmful belly fat within weeks