How wrinkles could be a thing of the past: Scientists create drugs which could keep the skin youthful by boosting levels of a crucial protein

Saggy, wrinkled faces could soon be a thing of the past as researchers have identified a key mechanism of how skin ages.

A key protein compound which could represent ‘a new anti-ageing intervention’ has been discovered by scientists.

Two drugs have been created which offer hope that a fountain of youth could be developed in the future.

The drugs work by boosting levels of a certain protein, which is found in high levels in young skin cells, but begins to dwindle over time as we age. 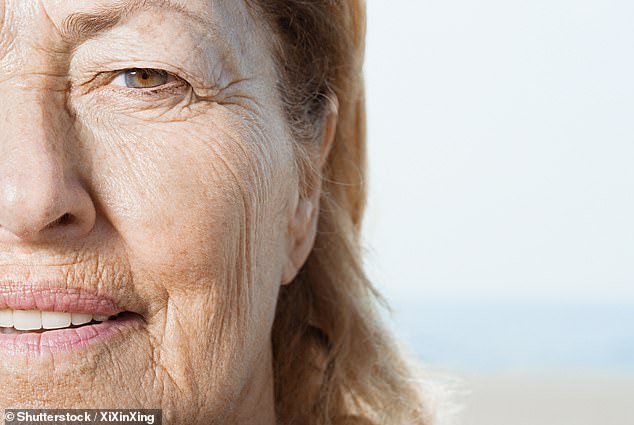 Scientists from the University of Colorado said their discovery could reveal a way to reduce wrinkles, sun damage, and potentially even skin cancer (stock image)

When the levels of this protein drop, skin cells appear older, misshapen and less elastic.

As long as lots of cells are being born deep below the surface of the skin with high levels of the protein, the skin appears youthful.

In a ‘survival of the fittest’ scenario, these healthier skin cells out-compete the weaker ones, which go on to die.

But over time, fewer strong skin cells are born and the weaker ones take over, creating a wrinkly appearance to the skin.

In addition, stress, such as exposure to toxic chemicals, or sun damage can also reduce levels of the protein, called COL17A1.

But giving hope to anyone who wishes for a more youthful appearance, researchers said they have found a way to boost its levels.

As well as recreating youthful looks, the drugs have potential to help wound healing and even to prevent skin cancer, the researchers suggest.

Emi Nishimura, from Tokyo Medical and Dental School, and colleagues made the discovery in mice and in human skin tissue grown in the laboratory.

The compounds have yet to be tested on living humans.

Writing in the journal Nature, the authors said they discovered two chemical compounds that boosted COL17A1.

The chemicals, Y27632 and apocynin, when applied to the skin, ‘significantly promoted wound repair’ by boosting the production of skin cells with high levels of COL17A1, the authors wrote.

The discovery ‘points towards directions for facilitating skin regeneration and reducing skin ageing,’ they said.

Commenting on the discovery, Ganna Bilusova and James DeGregori, both of the University of Colorado, suggest that the discovery may also help prevent tumours forming.

They wrote, the ‘maintenance of fit stem cells through the years in which an individual is likely to reproduce probably also prevents tumour development, because these fit cells compete with (and eliminate) both damaged stem cells and tumour-prone cells’.

They added that the work ‘provides evidence that healthy cells in mammals can also efficiently repopulate adult tissues, replacing unfit or damaged cells.

‘Both chemicals improve wound healing in mouse tail skin, providing a proof-of-principle demonstration of the therapeutic potential of this new class of drug.’

The development also points the way to regenerate other organs apart from the skin, Professor Bilusova and Professor DeGregori wrote.

‘Future studies are needed to determine the mechanisms of cell competition in other tissues, and to identify compounds capable of reversing ageing in other organs.’

WHY DO WE GET WRINKLES?

Wrinkles are creases, folds, or ridges in the skin.

They normally appear as people get older, but they can also develop after spending a long time in water.

The first wrinkles to appear on a person’s face tend to occur as a result of facial expressions.

A tendency to laugh, frown or glare in a certain way can amplify creases in particular regions.

Laughter lines and crows feet tend to be formed from smiling and forehead furrows originate from frowning.

Sun damage, smoking, dehydration, some medications, and environmental and genetic factors also affect when and where people will develop wrinkles.

Most wrinkles tend to appear in the parts of the body which receive the most sun exposure, especially the face and neck, the back of the hands, and the arms.

The upper layer of skin has to renew regularly as it is made of dead cells.

As you get older, it takes longer for your epidermis to renew itself – and it shows more and more signs of your age.