Researchers in the UK have conducted a study suggesting that the B.1.617.2 (delta) variant of severe acute respiratory syndrome coronavirus 2 (SARS-CoV-2) – the agent that causes coronavirus disease 2019 (COVID-19) – is transmitted more quickly than previously circulating variants.

The team’s analysis of data from the ongoing UK Health Security Agency household study found that the mean intrinsic generation time (speed of transmission between individuals) of the currently dominant delta variant was slightly shorter than for the previously dominant B.1.1.7 (alpha) strain.

However, the results pointed to substantially higher transmissibility for the delta variant within households.

The researchers – from the University of Oxford, the London School of Hygiene and Tropical Medicine, the UK Health Security Agency in London, and the University of Warwick in Coventry – say the findings have important implications for interventions such as contact tracing, testing and isolation since these measures are less effective if SARS-CoV-2 is transmitted quickly.

Robin Thompson and colleagues say that epidemiological models of interventions should be updated to ensure that they factor in the shorter generation time of the delta variant.

A pre-print version of the research paper is available on the medRxiv* server while the article undergoes peer review.

The concerns surrounding transmission of the delta variant

In mid- 2021, the delta variant became the dominant strain of SARS-CoV-2 in the UK and globally.

Worryingly, the emergence of the delta variant has led to an increase in the growth rate of COVID-19 cases in the UK. Furthermore, an epidemiological study suggests it to be 43 to 68% more transmissible than the previously dominant alpha lineage.

The transmission of a SARS-CoV-2 variant can be characterized by its speed (how quickly its incidence grows at the population level), and its strength, which is typically measured by its reproduction number – the number of people an infected person is expected to transmit the virus to.

The generation time (time between infections among infector-infectee pairs) determines the relationship between a variant’s speed and strength and is a crucial input for many models used to estimate the reproduction number.

In theory, an increase in the COVID-19 case rate could be attributed to either an increase in SARS-CoV-2 transmissibility, a shortening of the generation time, or both of these factors.

Since the generation time of this virus is changing, up-to-date estimates must be obtained to inform reproduction number estimates and to understand the relative transmissibility of novel variants.

What did the researchers do?

Thompson and colleagues fitted a mathematical transmission model to data from an ongoing household study conducted by the UK Health Security Agency. Since this study began in February 2021, the generation time could be calculated for both the delta and the alpha variants. At the time of the analysis (September 2021), data were available for 557 individuals across 227 households.

First, the team estimated the intrinsic generation time, which describes the generation time if the number of susceptible individuals remains constant. The distribution of this quantity reflects the relative transmission risk posed by an infected host, independently of a household’s structure.

The researchers also estimated household generation time for individuals of different ages and vaccination status, with these estimates stratified by variant.

What did the study find?

The mean intrinsic generation time (susceptible depletion not accounted for) was found to be slightly shorter for the delta variant than for the alpha variant, at 4.6 versus 5.5 days. 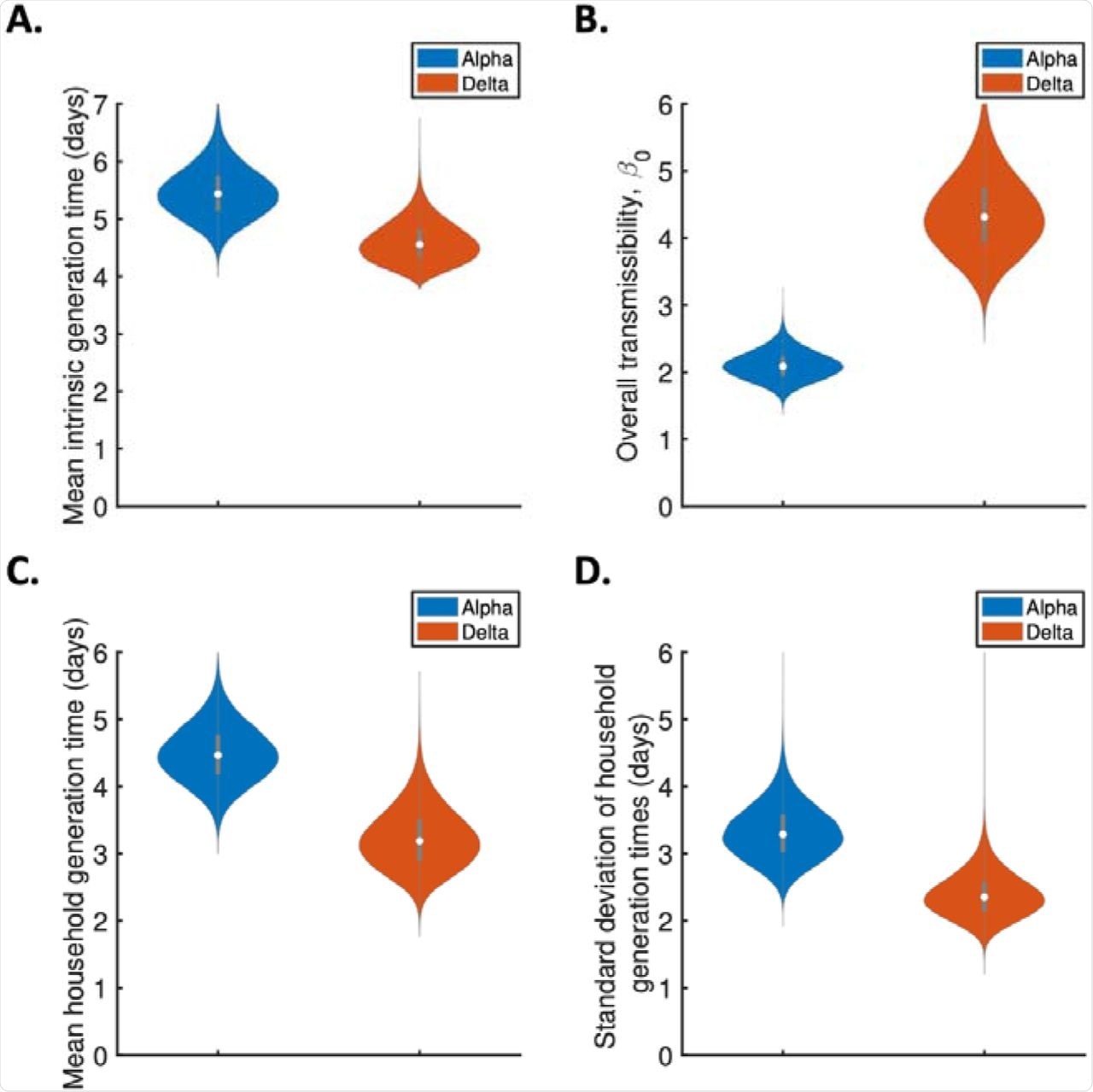 However, there was a larger difference in the realized mean household generation time between the delta and alpha variants, at 3.2 versus 4.5 days.

The team says this is due to the higher transmissibility of delta leading to faster susceptible depletion in households, in addition to the reduced intrinsic generation time.

In each case, the effect of the variant on the household generation time was substantially greater than the effect of age or vaccination status.

Finally, the household generation time reduced between April and June 2021, which the authors say is likely due to the delta variant becoming dominant in the UK during May. 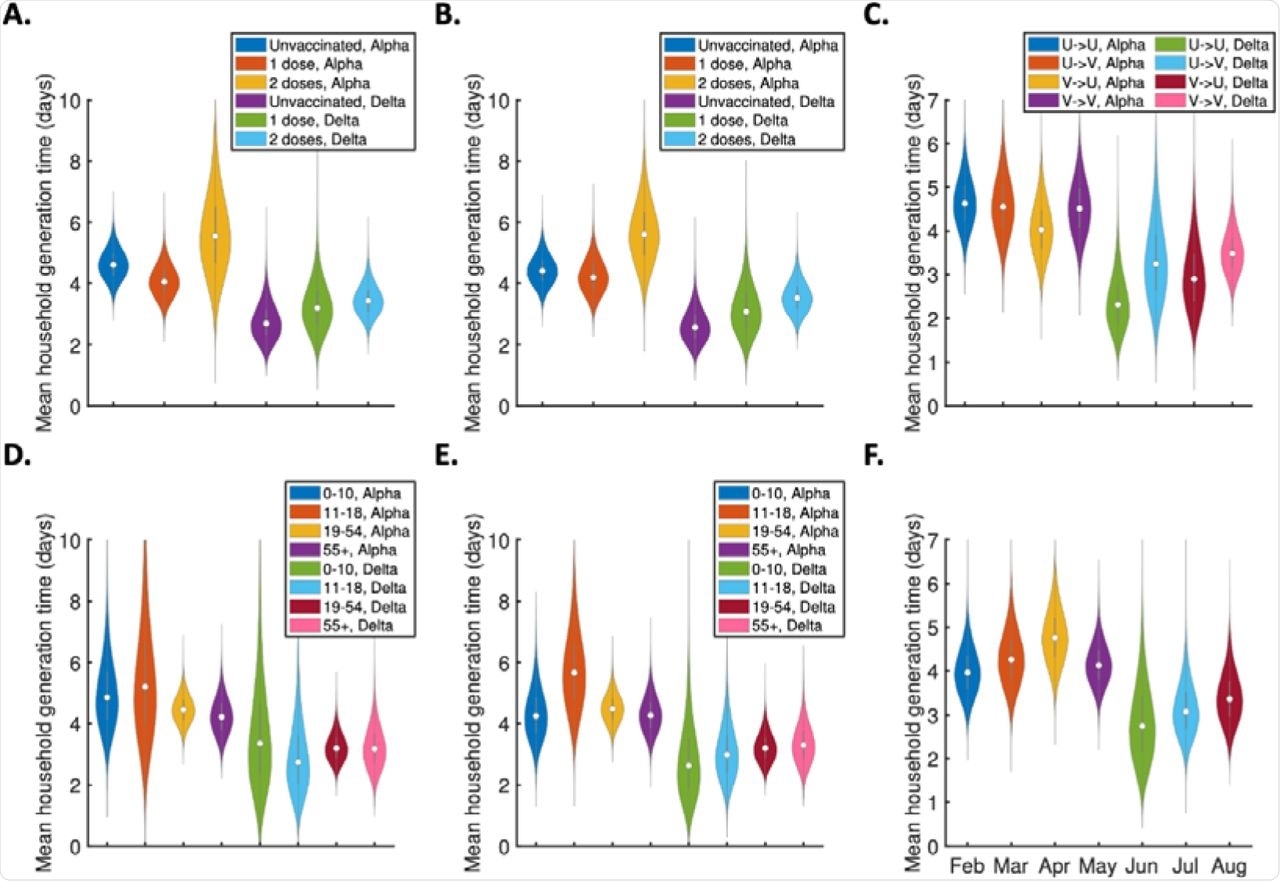 What did the authors conclude?

The researchers conclude that the observed growth rate advantage of the delta variant is probably due to a combination of both increased transmissibility and a shorter generation time.

Thompson and colleagues advise that this has implications for interventions since public health measures such as contact tracing are less effective when transmission occurs quickly.

The team says it is essential that epidemiological models are updated to reflect the generation time of the SARS-CoV-2 variants that are driving transmission and that this quantity is assessed in the future as transmission characteristics continue to change.

medRxiv publishes preliminary scientific reports that are not peer-reviewed and, therefore, should not be regarded as conclusive, guide clinical practice/health-related behavior, or treated as established information.

Sally first developed an interest in medical communications when she took on the role of Journal Development Editor for BioMed Central (BMC), after having graduated with a degree in biomedical science from Greenwich University.

The Use of Nanosensors to Restore Retinal Vision