The death toll of a killer measles outbreak in Samoa has risen to 32 from 25 yesterday, with 28 of the dead aged under four and most of them babies.

Low vaccination rates on the Pacific islands have allowed the disease to spread rapidly and affect more than 2,400 people in a matter of weeks.

The government there has closed schools and banned children from public gatherings, and is ordering everyone to get vaccinated.

Yesterday a government official said the outbreak was ‘a big problem’ for the island.

Measles has been largely wiped out in developed countries like the US and UK thanks to national vaccination programs, but it is deadly and spreads extremely fast in areas where people haven’t had the jab. 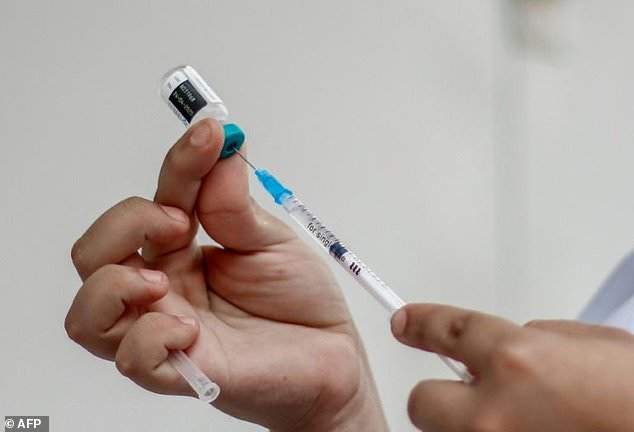 Almost 60,000 people in Samoa have had the measles vaccine since the outbreak began but the government says more work must be done to make sure the entire population of 200,000 people is covered (stock image)

According to government figures, 28 of the dead are children aged four or under and the total number of measles cases is now 2,437.

Samoa has declared a state of emergency but overstretched medical services are struggling to contain the outbreak.

The spread of the viral illness has been exacerbated by the country’s low vaccination rates – only around two in every three people are protected.

The number of cases has risen five-fold in the past week and fatalities have more than tripled.

‘We have come a long way in a matter of days but there is more to done,’ he said on Monday.

‘We cannot afford to relax our response until everyone is vaccinated.’

Children are the most vulnerable to measles, which typically causes a rash and fever but can also lead to brain damage and death.

Schools and kindergartens have been closed and children have been banned from public gatherings, such as church services, to minimise the risk of contagion.

Young moms more likely to have kids with ADHD