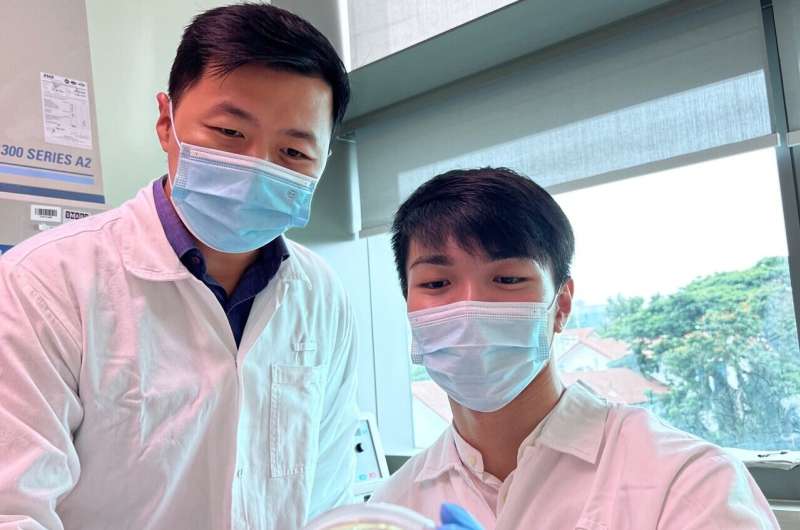 Researchers from the Antimicrobial Resistance (AMR) Interdisciplinary Research Group (IRG) at Singapore-MIT Alliance for Research and Technology (SMART), MIT’s research enterprise in Singapore, alongside collaborators at Nanyang Technological University, have identified a novel phage lysin—Abp013—that could be used as an alternative antimicrobial agent against two of the most deadly bacteria: Acinetobacter baumannii and Klebsiella pneumoniae.

Lysins—enzymes produced by bacteriophages—have displayed great potential as a novel class of antimicrobials as their properties allow them to quickly and directly target key structural components of a bacteria’s cell walls, and in doing so, reduce the bacteria’s ability to develop resistance.

The inappropriate and extensive use of antibiotics over the past few decades have led to the emergence of antimicrobial resistance—a phenomenon in which bacterial strains develop mechanisms to resist medicines designed to kill them. In 2019 alone, it is estimated that 4.95 million people died from infections either associated with or attributable to antimicrobial resistance. This already pressing issue, compounded further by the widespread usage of antibiotics during the COVID-19 pandemic, highlights the urgent need for new therapeutic agents that are difficult for bacteria to develop resistance against.

“Antimicrobial resistance remains an ever-growing threat to humankind, and an increasing number of people die each year from superbug infections. The development of new bacteria-killing agents is crucial, and lysins have shown great promise in treating deadly chronic wound and lung infections against which no antibiotics are effective and limited treatment options are available,” said Joash Chu, first author of the paper that documented the discovery, and former researcher at SMART at the time of the study.

Lysins have been highly effective in fighting Gram-positive bacteria—which do not have an outer lipid membrane and thus easily killed by lysins. Conversely, in Gram-negative bacteria, the presence of an outer membrane impedes many lysins from killing the bacteria efficiently. Hence, the discovery of novel lysin Abp013 is crucial in the advancement of treatment methods against multidrug-resistant Gram-negative pathogens.

In a paper titled “Novel Phage Lysin Abp013 against Acinetobacter baumannii” published in the journal Antibiotics, the SMART AMR team reveals their findings on Abp013’s ability to effectively access and kill various bacterial strains. The study showed that Abp013 displayed good permeability and killing activity against multiple Acinetobacter baumannii and Klebsiella pneumoniae strains, even when they are in a more complex environment in which typical lysins are ineffective.

Acinetobacter baumannii and Klebsiella pneumoniae are superbugs responsible for a multitude of potentially life-threatening infections, such as pneumonia and meningitis, especially among the ill and immunocompromised. Unfortunately, many strains of these bacteria are difficult to treat as they grow increasingly resistant to antibiotics. Typically, to treat Acinetobacter infections, healthcare providers have to send a specimen for laboratory testing to determine which antibiotics are effective in fighting the bacteria. Thus, the important discovery of Abp013 and its unique bacteria-targeting properties could advance the development of remedies for quicker and more effective targeting of these bacteria.

“Abp013 is the first Gram-negative lysin found to display host selectivity. Prior to the discovery of Abp013, no other lysins are capable of targeting Acinetobacter baumannii and Klebsiella pneumoniae but not Pseudomonas aeruginosa. Understanding the mechanism behind such selectivity will help guide the development of lysin variants customized to only target pathogenic bacteria, for more precise treatment of bacterial infections,” said Dr. Goh Boon Chong, Principal Research Scientist at SMART AMR, and a co-corresponding author of the paper.

Parkinson’s disease: The warning sign found in a person’s breath