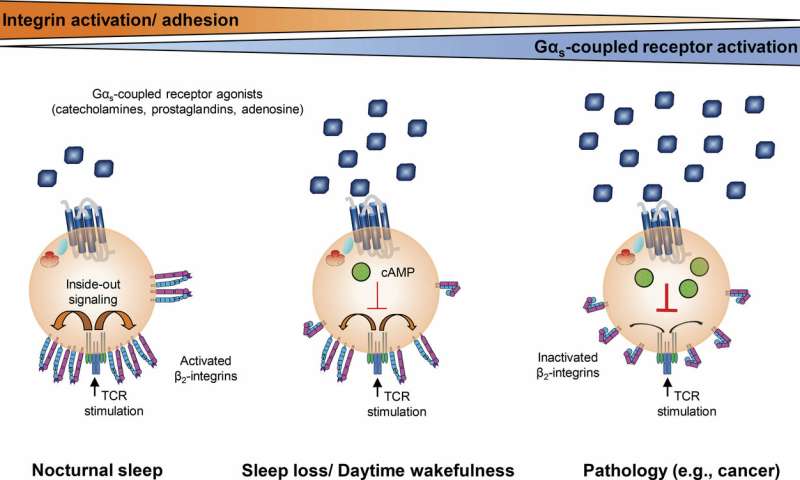 Researchers in Germany have discovered why sleep can sometimes be the best medicine. Sleep improves the potential ability of some of the body’s immune cells to attach to their targets, according to a new study that will be published February 12 in the Journal of Experimental Medicine. The study, led by Stoyan Dimitrov and Luciana Besedovsky at the University of Tübingen, helps explain how sleep can fight off an infection, whereas other conditions, such as chronic stress, can make the body more susceptible to illness.

T cells are a type of white blood cell that are critical to the body’s immune response. When T cells recognize a specific target, such as a cell infected with a virus, they activate sticky proteins known as integrins that allow them to attach to their target and, in the case of a virally infected cell, kill it. While much is known about the signals that activate integrins, signals that might dampen the ability of T cells to attach to their targets are less well understood.

Stoyan Dimitrov and colleagues at the University of Tübingen decided to investigate the effects of a diverse group of signaling molecules known as Gαs-coupled receptor agonists. Many of these molecules can suppress the immune system, but whether they inhibit the ability of T cells to activate their integrins and attach to target cells was unknown.

Dimitrov and colleagues found that certain Gαs-coupled receptor agonists, including the hormones adrenaline and noradrenaline, the proinflammatory molecules prostaglandin E2 and D2, and the neuromodulator adenosine, prevented T cells from activating their integrins after recognizing their target. “The levels of these molecules needed to inhibit integrin activation are observed in many pathological conditions, such as tumor growth, malaria infection, hypoxia, and stress,” says Dimitrov. “This pathway may therefore contribute to the immune suppression associated with these pathologies.”

“Our findings show that sleep has the potential to enhance the efficiency of T cell responses, which is especially relevant in light of the high prevalence of sleep disorders and conditions characterized by impaired sleep, such as depression, chronic stress, aging, and shift work,” says last author Luciana Besedovsky.

The Big Happiness Interview: Why lying is making us miserable