The world’s most advanced bionic hand which is controlled by the mind and even has a sense of touch has been developed by scientists.

The breakthrough prosthetic – the first of its kind for those with a below-elbow amputation – offers a greater degree of sensitivity than existing artificial limbs.

And unlike past prosthetics that required amputees carry large computers in a rucksack, this hand has all its technology packed into the fist and is battery charged.

Known as a osseo-neuromuscular implant, the prosthetic has been tested on one woman in Sweden – who declined to be named. She is already relearning how to control the artificial limb via virtual technology. 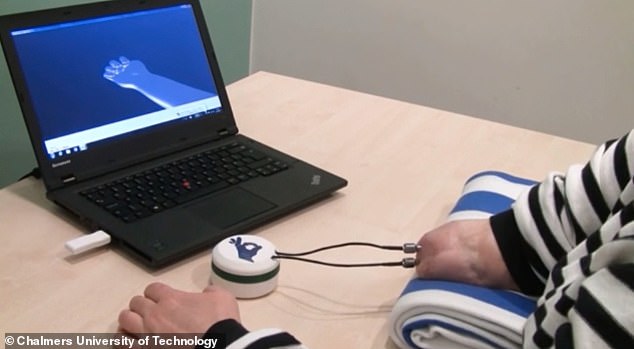 Scientists from all the world – including the University of Essex – collaborated on the project.

It was led by Dr Max Ortiz Catalan, associate professor at the biomedical signals and systems research unit at Chalmers University of Technology, Gothenburg.

To test the prosthetic’s effectiveness, the Swedish amputee had titanium implants placed in two bones around her elbow.

She went under the knife at Sahlgrenska University Hospital in Gothenburg.

Sixteen electrodes come out of these implants and into the remaining muscle in her stump. These electrodes were then connected to her nerves.

Sensors then drive stimulation to the patient’s nerves, resulting in her having greater sensation and control over the prosthetic hand.

Conventional prosthetic hands rely on electrodes on top of the skin that pick up signals from muscles in the stump.

But this is unreliable, with only basic movements, such as opening and closing the hand, being controlled.

Users are also unable to tell – by touch – when they have made contact with an object or how tightly they have grasped it.

Dr Luca Citi – from the University of Essex’s Brain-Computer Interfaces and Neural Engineering Laboratory – said the prosthetic allows for a direct mechanical connection with the bones.

This makes the hand feel much more part of the body than previous models.

‘This is a take-home hand,’ he said. ‘We detect the electrical signal that the brain is sending to control the hand.

‘We detect that signal and we do some number crunching to make sense of those signals, realising that a specific pattern of signals relates to a specific function that the patient is trying to perform.

‘We tried to take an approach where we were making sense of the neurosignal to restore movement in a natural way.

‘So the patient does not need to specifically think about what to do, they can use the hand in a more natural way.’

Dr Ortiz Catalan predicts that once the Swedish woman has mastered how the prosthetic works – and built up her strength – she will be using the limb within months.

Bones become weak if not used, such as in amputees. The patient is therefore undergoing physio.

The patient has so far received a ‘virtual prosthetic’ – which resembles a circular disc with two wires coming out of it that attach to her stump – while she is trained in how to use the technology.

She will later get a dexterous hand prosthetic complete with built-in sensors.

Two more patients – in Italy and Sweden – will have these electrodes implanted over the next few months.

The researchers are now investigating how to move the technology from the lab into a device that can benefit people’s lives.

‘The main issue has been how do we get all this technology and interface reliable enough for the patient to just go about their daily life,’ Dr Ortiz Catalan said.

Despite the challenges, he insists the technology could benefit thousands.

‘It’s not as good as a real hand but it’s good enough for people to be able to go about their daily lives,’ he said.

Similar prosthetics have already been used in amputees who have lost a limb above the elbow, which has just one large bone as opposed to two smaller ones – radius and ulna – in the lower arms.

This caused challenges in designing the technology around the lower limb.

However, the lower arm also has more muscles, which allow for a greater precision of movement and control.

The new technology also does not require users to wear a socket over their stump, which can be uncomfortable and limit movement.

An approach to COVID-19 vaccination equity for Black neighborhoods