Man, 33, injected his SEMEN into his own arm for 18 months ‘to treat back pain’, bizarre medical case report reveals

A man has baffled doctors by injecting himself with his own semen in a bid to try and cure back pain.

The 33-year-old, who was admitted to a hospital in Dublin, had been injecting himself with his own ejaculate for a year-and-a-half before medics found out.

When he visited the doctor complaining of severe pain in his lower back, they noticed a red rash and swelling in his forearm.

His right arm had become infected with cellulitis as a result of the bizarre habit, which the doctor’s report described as ‘dangerous’. 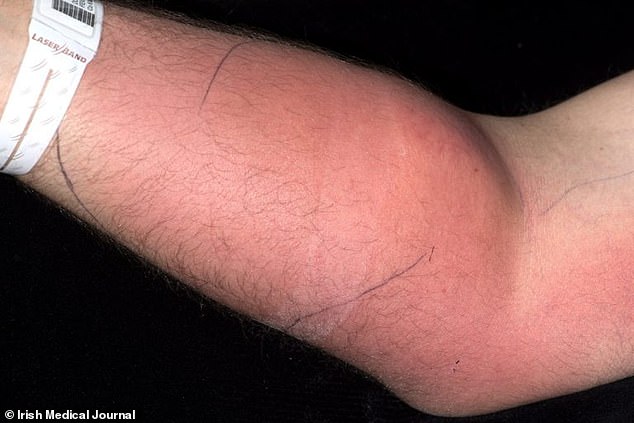 The man, who was treated at a hospital in Dublin, had swelling in his right forearm, which was infected with cellulitis because he had been injecting semen into it for 18 months 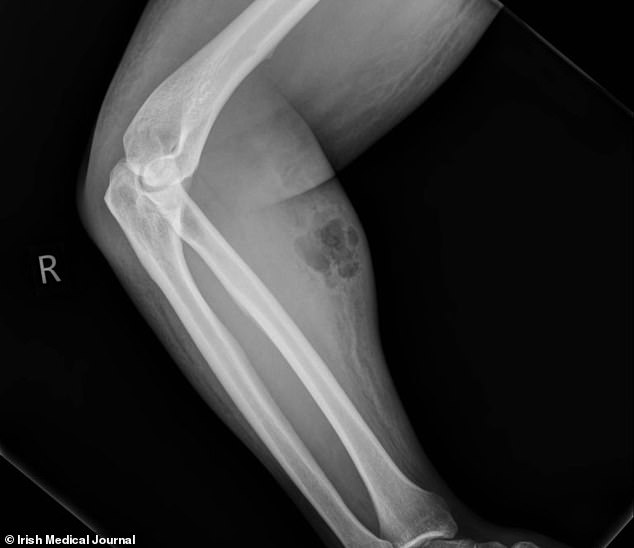 ‘He had devised this “cure” independent of any medical advice,’ Dr Lisa Dunne wrote in a case report in the Irish Medical Journal.

‘He revealed he had injected one monthly “dose” of semen for 18 consecutive months using a hypodermic needle which had been purchased online.’

Needless to say, the semen injections did not cure his back pain – which worsened after he lifted a heavy steel object – but his condition improved after a short hospital stay.

The man discharged himself from the Adelaide and Meath Hospital in the Republic of Ireland’s capital, before doctors had a chance to remove the semen.

WHAT RESEARCH HAS BEEN DONE INTO SEMEN INJECTIONS?

The report of the man who injected his semen into his own arm to try and cure chronic pain references one study into the effects of injecting human semen.

The research, called The Effects of the Injection of Human Semen into Female Animals, was done by University of Glasgow scientists in 1945.

They injected female rats, rabbits and guinea pigs with human semen to study the effects on their sexual organs.

They found: ‘Injection of semen into immature rats and rabbits yields completely negative results and does not afford any evidence of hormonal activity in semen.’

The study was published in the Journal of Obstetrics and Gynaecology.

The doctor who wrote this month’s report made no reference to any medical studies ever done into whether the strange injections could help pain.

Dr Dunne said the man’s case, in which the semen leaked into his soft tissue because of the botched injections, is believed to be the first of its kind.

He had ‘failed multiple attempts at injecting the bodily fluid,’ she wrote, in what he called an ‘innovative method to treat back pain’.

Dr Dunne explained there have never been any tests on the effects of injecting semen into human veins or muscles.

She admitted people have been recorded to have injected substances like petrol and lighter fluid in suicide attempts, but it was rare to try and self-medicate this way.

Learning about his case could provide lessons ‘on a broader scale’, her report said.

‘The dangers of [injections] when carried out by the untrained layperson are highlighted as well as the vascular and soft tissue hazards surrounding the attempted injection of substances not intended for intravenous use.

‘The case also demonstrates the risks involved with medical experimentation prior to extensive clinical research’.

The only past examples of semen injections noted in the journal – which could feasibly have inspired the misguided man – were experiments done by injecting human ejaculate into rats and rabbits.

Is milk bad for you? The dairy product is linked to heart disease, diabetes, and dementia

Chronic pain: Mindfulness can have major impact on the common condition