Lung cancer is one of the most serious types of cancer to be diagnosed, as it’s usually difficult to spot until it has spread to other parts of the body. But it’s also one of the most common cancers to be diagnosed in the UK, warned the NHS. Signs of the disease only tend to reveal themselves once the cancer has spread through the lungs. You could be at risk of lung cancer if you suddenly develop an itchy and painful rash, it’s been revealed.

The rash is part of an uncommon inflammatory disease known as dermatomyositis, according to the Mayo Clinic.

You may notice a purple rash on your face or eyelids, and it can be very painful.

As well as the rash, patients tend to develop progressive muscle weakness around their hips, thighs, shoulders and arms.

“Dermatomyositis in adults has been linked to an increased likelihood of developing cancer, particularly of the cervix, lungs, pancreas, breasts, ovaries and gastrointestinal tract,” said the Mayo Clinic.

“Dermatomyositis is an uncommon inflammatory disease marked by muscle weakness and a distinctive skin rash.

“The most common signs and symptoms of dermatomyositis include skin changes. 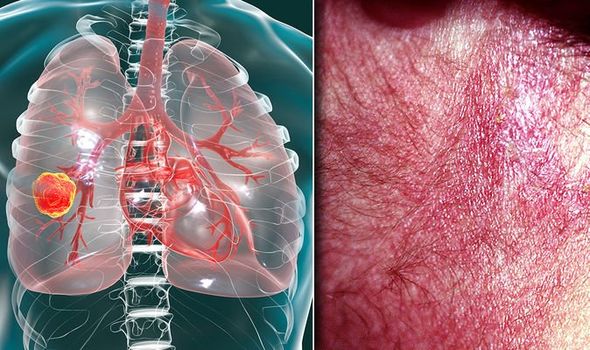 “A violet-coloured or dusky red rash develops, most commonly on your face and eyelids and on knuckles, elbows, knees, chest and back.

“The rash, which can be itchy and painful, is often the first sign of dermatomyositis.”

You should speak to a doctor if you’re worried about the warning signs of dermatomyositis, it added.

There’s currently no cure for the condition, but treatment can clear the skin rash and help you to regain muscle strength. 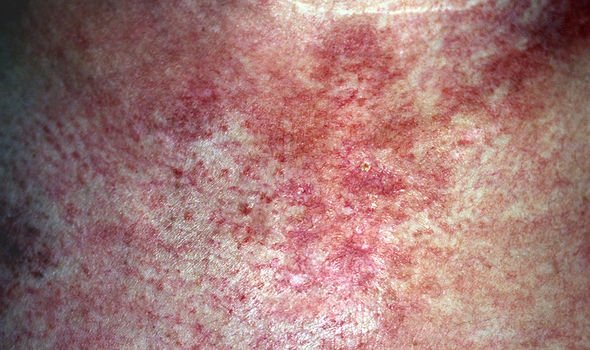 Meanwhile, other lung cancer symptoms include having a cough that won’t go away, having a hoarse throat, or feeling short of breath.

You should speak to a doctor if you’re worried about the signs or symptoms of lung cancer.

The outlook for lung cancer isn’t as good as other types of cancer, as the symptoms are usually only spotted in its later stages.

About one in three patients live for at least a year after their diagnosis, while one in 20 live for another 10 years.

Around 45,000 people are diagnosed with lung cancer in the UK every year.