‘I’ll never let blindness stop me being a good mum’: TV reporter Jeremy Bowen’s sister has learned to raise children after losing her sight — and here she explains why funding is so crucial

Charlotte Carson is the busy mother of two little girls, Jess, eight, and six-year-old Connie, with a full-time job as a director of a charity — and responsibility for walking the family dog.

Charlotte manages all of this while contending with extremely poor vision. She started losing her sight at the age of seven, and it has continued to worsen, to the point where she can now see just the outlines of objects. On some days, a heavy, grey fog obscures most of her vision.

Charlotte has cone-rod dystrophy, which affects around one in 30,000 people. This causes the deterioration of cells at the back of the eye in the retina, which is responsible for sending images to the brain. The condition results in reduced clarity of vision, a reduced ability to perceive colour and an abnormal sensitivity to light. 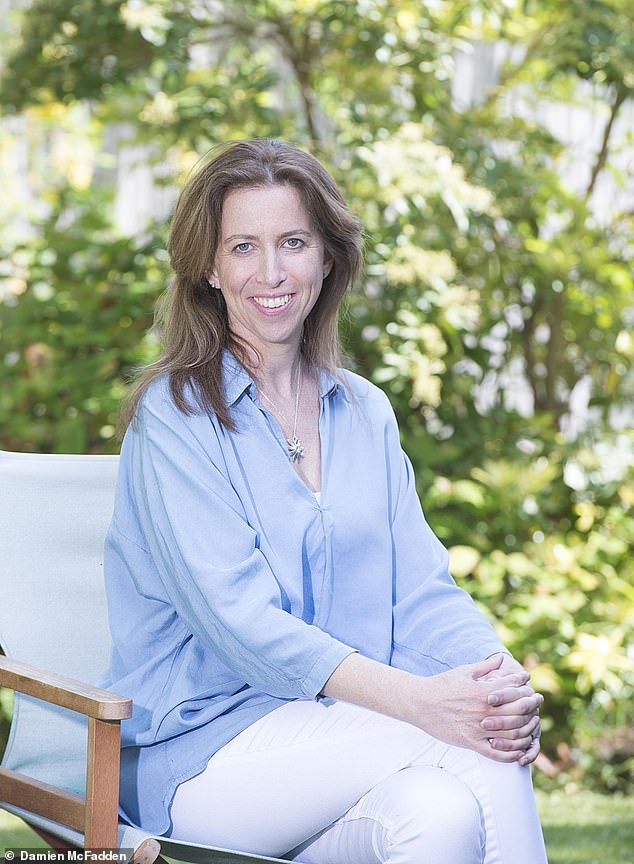 Charlotte Carson from Hereford. Charlotte has two kids, does everything the rest of us do and leads a charity to help young people and families living with vision impairment

‘I’ve learned to be a blind mum,’ says Charlotte, 41, who is the younger sister of the BBC’s Middle East editor, Jeremy Bowen, and Nick Bowen QC.

‘I’m organised and know I can easily find everything. I use my ears to “see” what the girls are doing. I often know when they’re upset long before sighted people might, as I’m so tuned in to their tone of voice and breathing. I instinctively know how they’re feeling.

‘I can’t read books, but I can tell my girls stories and sing songs to them. I love cooking and I still manage that. My husband, Quentin, is an active, engaged dad and my family are very supportive.’

Charlotte’s sight problems were first spotted by a relative.

‘I’d always been a great reader, but my uncle noticed my sudden reluctance to get involved in reading competitions and urged my parents to get my sight checked,’ says Charlotte.

At the time, there was very little support available. ‘I went from being a sporty, independent little girl to the odd one out,’ she says.

‘I kept being pulled out of class to go to hospital appointments. I was scared to go into the school dining room, as I didn’t know what I would eat or where I’d sit because I couldn’t see the food or my friends. 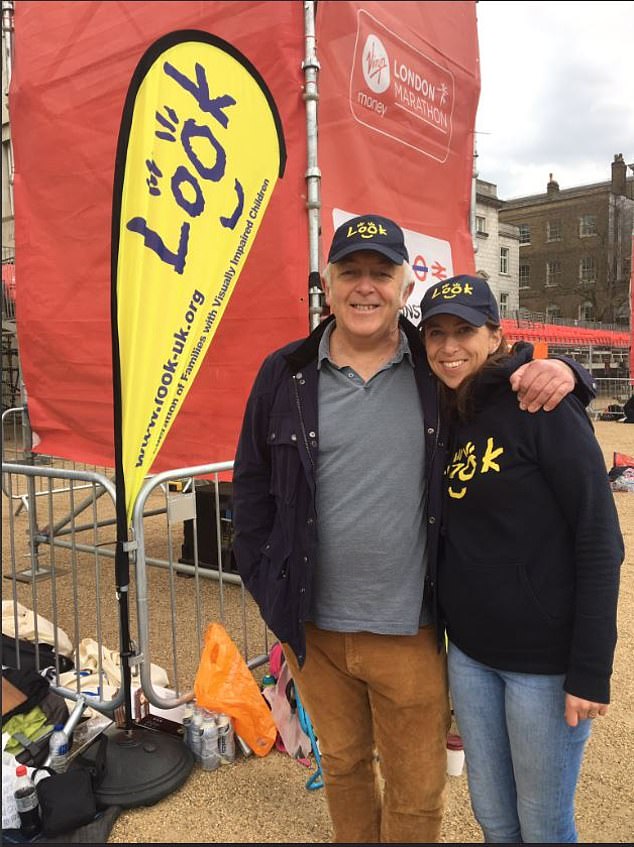 Jeremy Bowen with his Sister Charlotte Carson. Charlotte’s sight problems were first spotted by a relative

‘The staff said that I couldn’t continue there, and I was put into a special needs unit attached to a local primary.

‘I hated knowing that the sighted kids were staring at me using my magnifiers in a mainstream class.

‘I developed anxiety and school phobia and was physically sick at the thought of going there.’

When Charlotte began losing her sight, a specialist warned her mother not to expect the same from her as she did from her other children.

‘But Dad was a journalist [working for the BBC] and Mum a freelance photographer, and they were determined to get me all the support I needed,’ she says.

‘The reality was far harder than they could have imagined, involving endless meetings with the local authority, trips to see specialists, tribunals, letters to newspapers and starting parent campaign groups to promote inclusion.

‘It became their mission to make sure other parents wouldn’t have to get help for their visually impaired child alone, and that was when they set up Look UK, a charity that supports young people and families living with a vision impairment.’

After Charlotte’s father wrote an article about how her sight loss changed her from a confident child to being physically sick at the thought of school, the headmaster of Edgarley Manor, a junior school in Somerset, offered Charlotte a place on a scholarship.

‘I boarded there and, from age 11 to 14, I absolutely thrived,’ says Charlotte. ‘It was more inclusive, with just 11 classmates, and I made amazing friends, though I always knew I was different.

‘When I moved on to senior school, however, I didn’t cope well, and would hide in the loo, rather than get lost on my way to lessons. I couldn’t read my timetable or the signs on the doors. I didn’t feel confident to ask for help and my school phobia returned.’

But she then spent three years at New College Worcester, an independent school for those who are blind or partially sighted, and for the first time lived alongside other visually impaired people. ‘I was finally able to come to terms with my sight loss,’ she says.

Eventually, Charlotte went to work at the BBC and then run her own disability equality training business, before becoming director at Look UK in 2014.

She fears she is one of the lucky ones, though. For there is little doubt her ability to lead a normal productive work and family life is thanks to her family — and the help of the Government.

She explains: ‘I receive a benefit called direct payments, so I can employ a home support worker ten hours a week, and she’s invaluable.

‘She helps me organise the house, go to the supermarket and batch-cook for the freezer.’

To help Charlotte do her job, she also receives a government grant called Access to Work. ‘That pays for all the technology I need, as well as a personal assistant who drives me around, reads text and helps with my admin,’ she says.

‘I wouldn’t have had such a successful working life if I hadn’t had that grant.

‘It’s vital that we protect this to help disabled people have a fairer chance of a fulfilled working life.’

She is referring to caps being placed on new Access to Work grants in 2015 and, since last year, for existing claimants.

The cuts come as the number of people with sight loss is set to rise from 2 million to 2.7 million by 2030, according to the Royal National Institute of Blind People (RNIB).

This is due to the UK’s ageing population, as well as conditions such as diabetes and lifestyle factors including obesity, it says.

Diabetes can damage the tiny blood vessels inside the retina, while studies are now connecting obesity to an increased risk of eye diseases that cause blindness: age-related macular degeneration (AMD), which causes sharp, central vision to blur, making activities such as reading difficult; cataracts, a clouding of the lens that affects vision; and glaucoma, a group of diseases that can damage the optic nerve, resulting in vision loss and blindness.

The RNIB is lobbying for the implementation of the recommendations of an all-party parliamentary group inquiry into increasing capacity in eyecare services for adults and children.

‘Local government is having to make difficult choices,’ says David Clarke, services director at the RNIB. ‘However, cuts to services don’t just come at huge personal cost to those with sight loss, but, in the long run, cost a lot more.

‘Currently, only one person in four with sight loss is in employment.

It is more than 30 years since Charlotte’s family found the impact of her sight loss made even worse by a lack of support and information, and she is frustrated that young visually impaired people still face barriers such as a lack of access to education.

‘It’s a constant fight to get recognition and support,’ says Charlotte. ‘I’ve had to come to terms with not being able to see my children perform at ballet shows or see their drawings — but I can be a mum in every way, as well as having a job. I just need human support to do the things I can’t, which is why grants and support networks are essential.’ 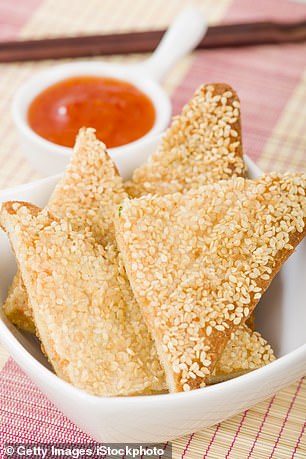 How to get the most out of food choices.

Prawns are high in lean, filling protein and a good source of selenium for a healthy immune system. But they make up only 25 to 30 per cent of a portion of prawn toast, with the other ingredients being oil, bread and salt, making the dish far from waistline-friendly.

This isn’t too fattening if it is made with reduced-fat mayonnaise or cocktail sauce. A typical 85g portion served on chopped lettuce has about 120 calories and very little cholesterol-raising saturated fat. 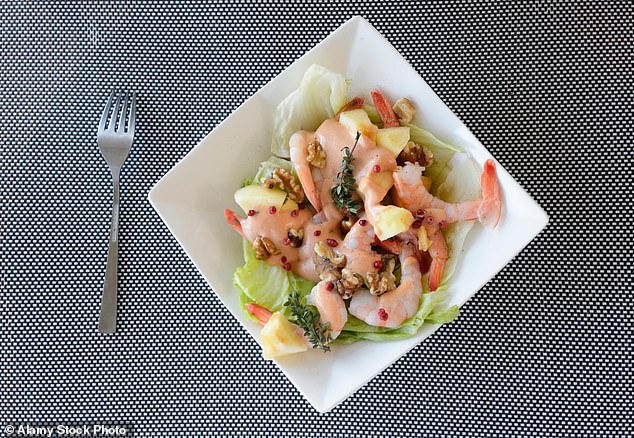 Brushed with oil and grilled, prawn and veggie kebabs make a low-calorie, nutrient-rich meal. The mushrooms supply vitamins B1 and B2, complementing others such as niacin and B12 from the prawns. The red peppers add vitamin C. 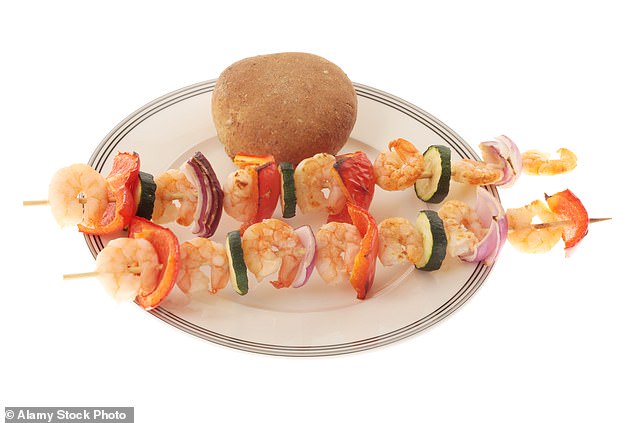 Does exercise help or hurt your heart?