Alan Edwards can still remember the day he heard clearly for the first time.

“It was an overwhelming sense of calm,” Edwards says, remembering sitting on a park bench and laughing as he enjoyed the sounds he’d never heard before. 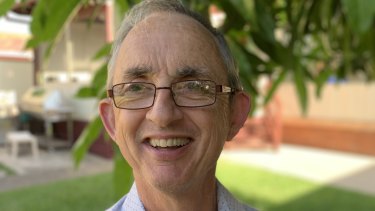 Alan Edwards found himself feeling isolated when his hearing deteriorated.

“It was really fascinating and amazing.”

Having struggled with genetic, degenerative hearing loss since he was born, Edwards, 58, says slowly losing his hearing was crippling.

“As a kid I could never spell because my hearing loss [meant] I missed bits of words,” he says.

“Imagine a tank full of water with a hole in the bottom, and that level of water is your level of hearing, and there's two drops out every day. It creeps up on you – you don’t know how bad it is.”

The food microbiologist from Riverwood, in Sydney's south, previously worked as a lawyer until his hearing deteriorated to the point he couldn’t continue practising.

“By about the late '90s I was having trouble hearing things in court,” he says. “It was just getting worse and worse.”

Conscious of his inability to hear everything around him and “full of self-doubt and anxiety”, Edwards began to withdraw.

“Walking down the street, I was reluctant to look people in the eye in case they said something. You don’t know what the social rules are because you start losing confidence in yourself."

His hearing loss meant his family relationships and friendships were severely affected, and he was driven further into isolation.

“There were days where I’d go through a whole family function and not talk to anyone. It was easier for everyone to do their own thing,” he says.

“If I had a party at home, I’d just get up and go and do the dishes. If someone came into the kitchen I could have a conversation. But if I went into a group I just couldn’t stand it, the noise would be so painful.”

Edwards now has two Cochlear implants: he had his right ear done in June 2017, followed by his left ear in July 2018. He says the results were life-changing, and possibly even life-saving.

“It’s a very lonely thing when you can’t communicate. I really get emotional talking about it…” he says, his voice cracking.

“There were times when I thought walking away from everything would be better. If it wasn’t for a supportive family, I don't know whether I’d be here.”

According to the 2019 State of Hearing report, realised by Cochlear today to coincide with the World Health Organisation's World Hearing Day, one in two people have a close family member with moderate to profound hearing loss.

However, fewer than 4 in 10 people have had their hearing tested in the past two years.

The social impact of hearing loss includes isolation, depression and anxiety, she says.

According to the Australian Institute of Health and Welfare, hearing loss affects an estimated 3.6 million people in Australia, a number that is expected to more than double by 2060.

Professor Birman urges everyone – particularly older people – to regularly get their hearing checked.

“Make it part of your usual check up; pick it up at an early stage so something can be done about it and we can improve your quality of life.”

While the ability to fully engage in conversation is an obvious benefit, Edwards appreciates the little things he can now do.

“I can order food in a restaurant. I can hear a whisper. I can hear my own feet when I’m walking."

Scientists will see decisions before they are aware

Has COVID Swayed the Rise in Pneumococcal Disease in Spain?