Unresolved disputes between the Government and personal protective equipment (PPE) suppliers could cost the country £2.7billion, MPs have warned.

Ministers wasted nearly £9billion on buying faulty masks, gloves, and aprons at the height of the Covid pandemic.

Department of Health and Social Care bosses are currently trying to claw back cash from nearly 180 different contracts.

But none have yet to move to the litigation stage of the process, the Public Accounts Committee has said.

In a damming report, it said the situation ‘beggars belief’ and that up to 5 per cent of PPE expenditure may be fraudulent. 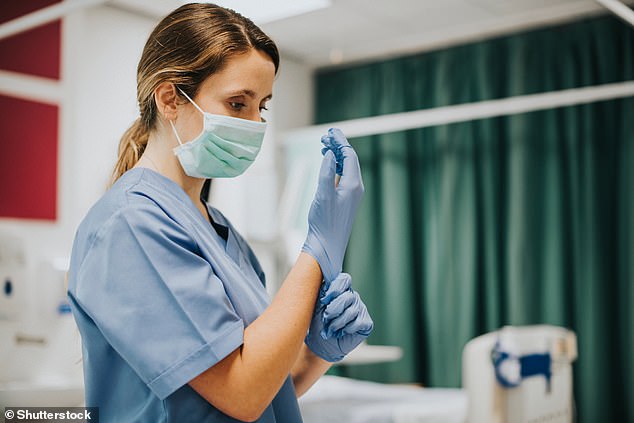 A damming report from MPs has found the Government disputes with PPE suppliers could cost the taxpayer £2.7billion and that officials are spending £7million a month on storage for faulty or expired equipment bought during the Covid pandemic (stock image) 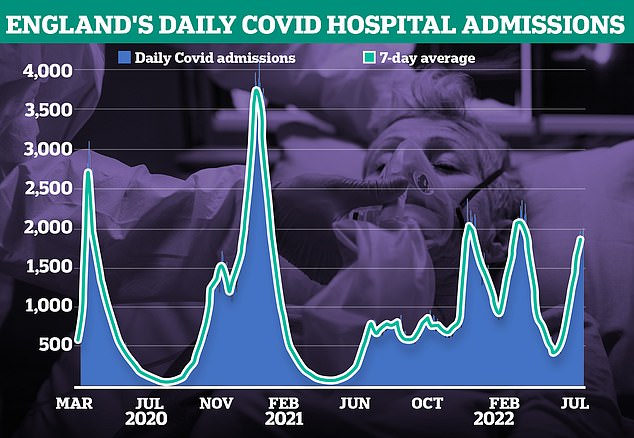 Daily Covid hospital admissions have risen to a near 18-month high, with around 2,000 people currently being hospitalised every day. Yet only a third of ‘patients’ needing care primarily ill with the virus itself. The rest have incidentally tested positive, NHS figures show

The UK is storing three billion pieces of personal protective equipment in China, it has emerged.

The health department is spending hundreds of thousands of pounds each month to store the surplus PPE.

Health minister Maria Caulfield said this week the Government has 17.7billion items of PPE and more than a sixth is stored in storage units and warehouses in China.

It is thought to be worth more than £1billion and cost £5.8million in storage between September and December last year.

It means the Government sending millions of pounds each year to China, branded ‘cheques to China’ by the Taxpayers’ Alliance. The think-tank said the revelations will ‘shock’ taxpayers and urged the Government to sell or dispose of the excess stock.

The Department of Health and Social Care said its priority during the pandemic was ‘saving lives’. A spokesman said: ‘We have been reducing our logistics cost over time and continue to do so.’

The cross-party group of MPs, which scrutinises Government spending, claimed the Government was paralysed from acting against some providers because of the poor checks carried out before deals were signed.

It means companies ‘may have made excessive profits whilst providing substandard PPE,’ the report read.

In particular, DHSC failed to check the profit margin suppliers were making on sales, meaning the taxpayer was overcharged, the PAC said.

Additionally, potential conflicts of interest between companies and those referred through No10’s controversial VIP lane were never considered.

PAC chairwoman and Labour MP Dame Meg Hillier said the Government’s approach to PPE spending put a ‘stain’ on the UK’s handling of the Covid pandemic.

‘The departure from normal approaches to due diligence, record keeping, decision making and accountability in relation to PPE contracts puts a stain on the UK’s response to the pandemic,’ she said.

‘Even if you accept that some proper procedure will have to slip in times of crisis, the complete collapse of some of the most well-established civil service practices beggars belief.

‘The taxpayer will be paying for these decisions for years to come.’

Ministers spent £14.8billion on securing PPE in the first year of Covid, according to annual accounts.

But roughly £8.7billion was written off, in a staggering illustration of No10’s waste.

Much of the kit, comprising masks, gowns and aprons, was faulty or not used before its sell-by date.

Ministers also paid hugely over the odds as demand skyrocketed in March 2020 and were left with equipment that later crashed in value.

Of the 37.9billion items of PPE purchased, the DHSC still holds more than 10 per cent that it does not need, according to the report.

The department is spending an estimated £7million per month on storing this excess equipment.

The items are spread over 70 locations across both the UK and China.

However, DHSC has failed to set up a system which allows it to fully track what PPE it has and where it is located.

PAC MPs want the Government to fix the issues that went wrong with procuring PPE in case of another pandemic in the future.

Responding to the report Labour’s Deputy Leader, Angela Rayner, said: ‘This report exposes the Conservatives’ catalogue of scandalous waste, with ministers opening the door for VIP fraudsters to rip off the British public.

‘Billions of pounds of taxpayers’ money is now literally going up in smoke as the Government’s bonfire of useless PPE grows.

‘The taxpayer will be paying for the Conservatives’ incompetence for years to come.’

The Government’s handling of PPE contracts has faced huge scrutiny, particularly regarding its VIP lane for suppliers.

In some cases, it saw ministers recommend friends and companies with connections to the Conservatives for multi-million pound contracts.

Concerns over PPE procurement during the Covid pandemic come amid growing calls from some figures to reimpose restrictions like mask mandates in response to a surge in virus cases.

Inside the World of Australian Strong Women