A girl was born with a tiny ‘bruise’ on her forehead that turned into a pomegranate-sized birthmark.

Chloe Lambert, now nine, of Milton Keynes, arrived eight weeks early with a tiny ‘bruise’ on the right side of her forehead.

Although her parents Jean and Michael were initially unconcerned, the mark soon began to grow bigger every day and turned a vivid red.

Dctors reassured the couple the blemish would disappear on its own but the mark – which was bigger than a 50p coin – started to scab and attracted cruel stares from strangers.

The blemish kept growing and Chloe was accepted onto a treatment trial at Great Ormond Street Hospital (GOSH), which cut off blood supply to her birthmark so it shrunk and could be surgically removed.

After going under the knife three times, Chloe is now left with just a slither of a scar and is proud to have been a ‘birthmark baby’. 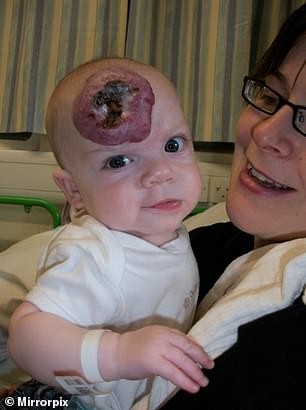 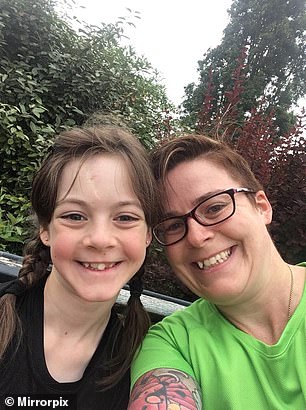 Chloe Lambert was born on August 30 2009 with a tiny ‘bruise’ on her forehead that turned into a pomegranate-sized birthmark. After being told there was nothing doctors could do, she is pictured left with her mother Jean on the first day of a trial treatment at Great Ormond Street Hospital to shrink the blemish. After having it removed, the pair are pictured right last June

The youngster was rushed to intensive care after she arrived at just 32 weeks, with Mrs Lambert – who is also mother to Chloe’s younger brother Thomas – having to be treated for a retained placenta, The Mirror reported.

A retained placenta occurs when it is not expelled from the body after labour, which can cause severe bleeding.

Unable to see her baby until five hours after the birth, Mrs Lambert instantly noticed the blemish on her daughter’s forehead but was more concerned about Chloe’s health following her early arrival.

After finally being able to take Chloe home following weeks in intensive care, Mrs Lambert noticed her daughter’s blemish was growing, with dermatologists telling the new parents it was actually a birthmark and there was nothing they could do.

However, the mark soon began to ulcerate and bleed heavily every time it was accidentally knocked. It even oozed pus when a scab on the blemish came off while Chloe’s parents dressed her.

And the mark even started to weigh down Chloe’s eye, prompting children to ask if they could touch it. 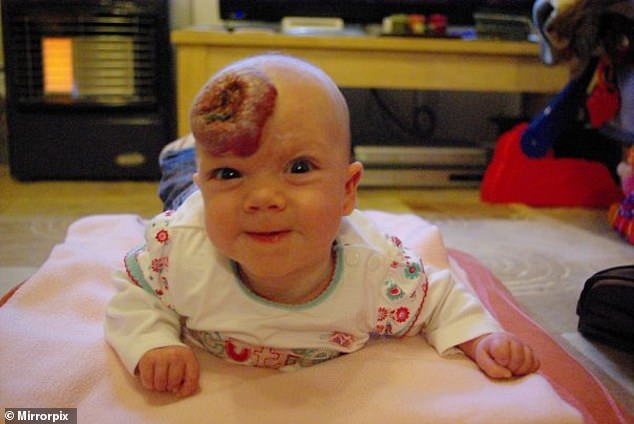 After being told the blemish would disappear on its own, it soon started to grow every day and turned a vivid red. Pictured on January 23 2010, Chloe’s eye was even weighed down by it 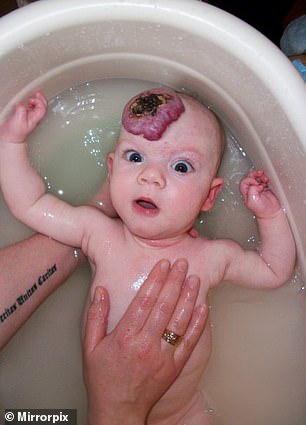 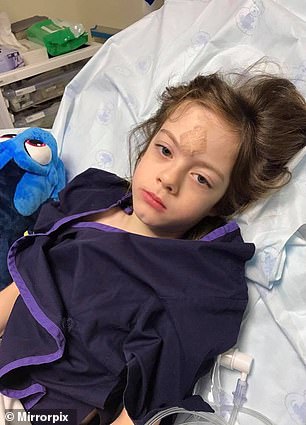 Desperate, Chloe’s parents went to a hospital for advice, where a passing doctor recommended a trial treatment that cuts off the birthmark’s blood supply and shrinks it. Chloe is pictured left on February 15 2010 and right after waking from surgery in 2016 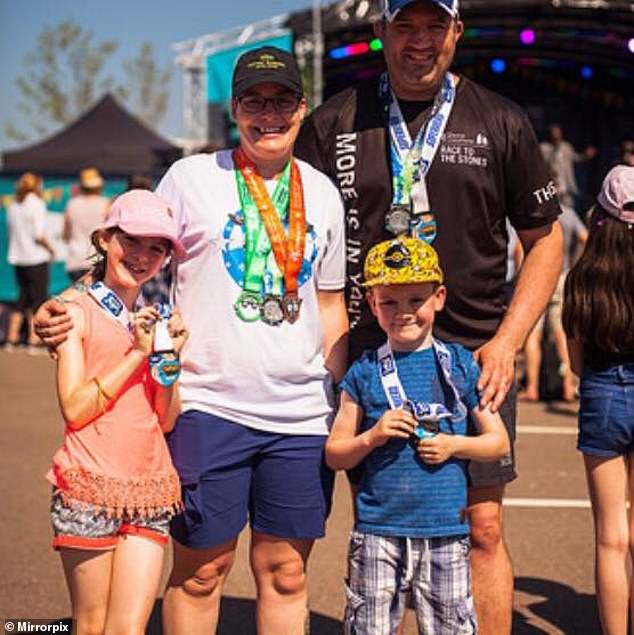 The trial treatment shrunk the birthmark enough for it to be operated on. After going under the knife three times, Chloe initially hid her scar under hats and with a fringe but is now proud of it. She is pictured with her mother, father Michael and brother Thomas on an active day out 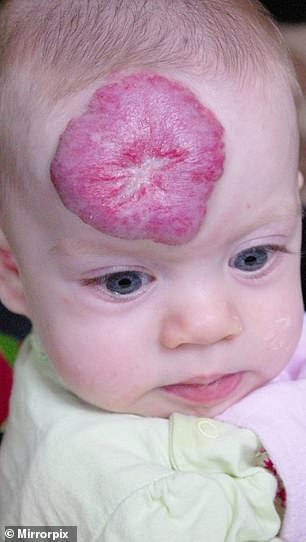 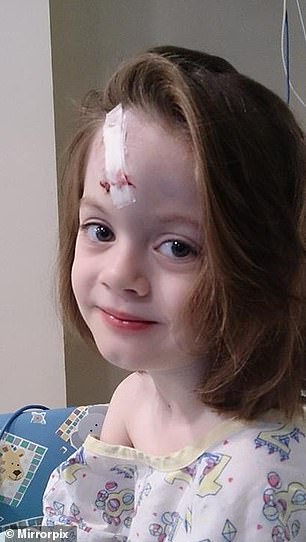 Chloe is pictured left after two months of treatment with the blood-pressure drug propranolol. The birthmark could only be removed when doctors knew it was no longer growing. The youngster is pictured right after surgery on August 19 2014, which left her with a slither scar

A birthmark is a blemish on the skin that is present at birth or develops in the first few weeks of life.

The type of birthmark depends on the main cells involved.

Most include melanin collected in one area to create a different colour to the rest of the body.

Vascular birthmarks consist of vessels that have not formed properly and can look reddish or blue.

Most birthmarks are caused by a change in a gene during early pregnancy when skin and blood vessels are forming.

The majority of birthmarks do not require treatment.

Those on the eyes, nose or mouth may need attention if they grow.

Laser treatment can reduce the colour of some red birthmarks.

Some blemishes fade with age, however, more prominent ones may affect people’s self esteem and benefit from psychological therapy.

Desperate for help, the parents visited medics at a hospital, only for their appointment to be interrupted by a passing doctor telling them of a new trial at GOSH.

Told she was a ‘prime candidate’ for the treatment, Chloe started the therapy just three weeks later, which involved her taking the blood-pressure medication propranolol.

This helped to reduce the blood flow through Chloe’s birthmark, causing it to shrink and become ‘softer’.

After a year on propranolol, doctors were confident the birthmark was not growing anymore and the youngster was ready for surgery.

Chloe now lives a normal life and is finally proud of her scar after years of covering it up.

‘We were ecstatic with the results,’ Mrs Lambert said. ‘How the scar is now, it’s like she’s just had an accident.

‘It shows the journey that she’s been on.’

Mrs Lambert is sharing Chloe’s story to raise awareness of the charity Birthmark Support Group, which supported her family throughout the ordeal.

She is running the London marathon in the charity’s only place and has already exceeded her £800 target. Donate here. 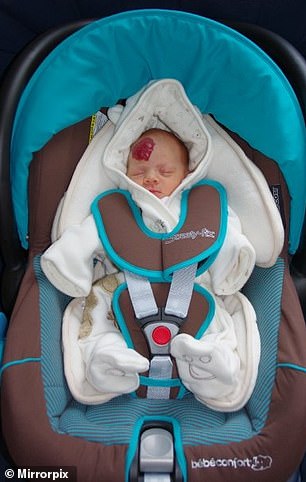 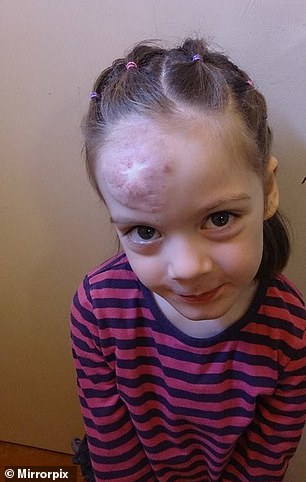 Chloe, who was born at just 32 weeks, spent several weeks in intensive care before finally being able to grow home. It was then her parents noticed the ever-growing birthmark (seen left). Chloe is pictured right pre-surgery. She even pins her hair back to show off her scar 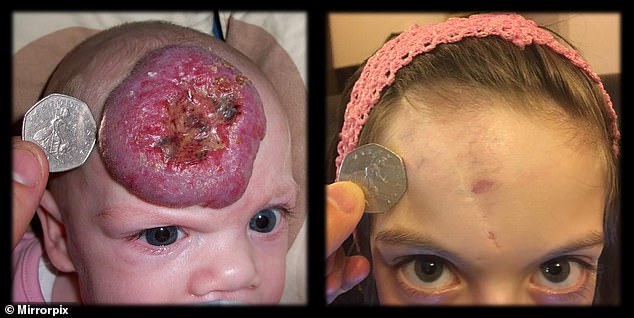 Before and after pictures show the change, with the mark once being bigger than a 50p coin 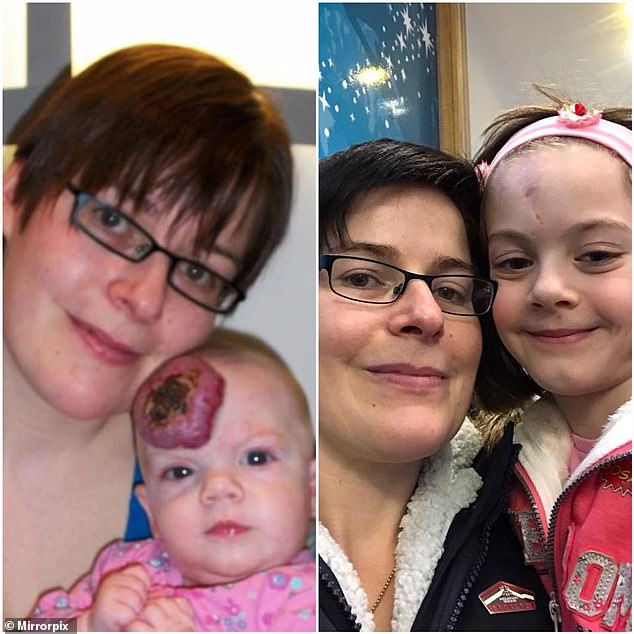 Chloe is pictured before and after with her mother, who is ‘ecstatic’ with the results 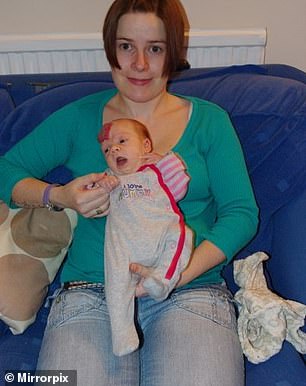 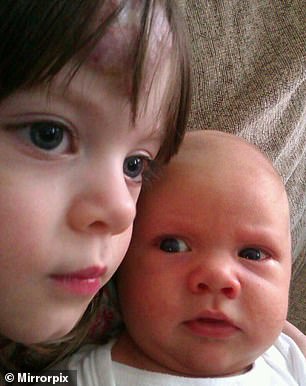 Chloe is pictured left with her mother at six weeks old – around the time her birthmark started to scab and bleed. The youngster is pictured right with her younger brother Thomas

Experts Reveal The Secret to Dealing with and Overcoming Your Anxiety

The culinary herb that may boast anti-cancer properties – do you cook with this?