Little girl, 8, who could only whisper because rare incurable tumors from HPV were slowly suffocating her can finally speak loudly and clearly

For years, no one could figure out what was wrong with Vivienne Weil’s voice.

She didn’t begin speaking until she was about two years old – a year later than most children – and, when she did, it wasn’t much louder than a whisper.

Doctors in her hometown of Rockville, Maryland, suspected upper respiratory infections at first, then acid reflux, but no matter what they prescribed, Vivienne’s voice didn’t improve.

Then, in late 2013, a pediatric ear, nose and throat doctor discovered that the little girl’s problem was far more serious than previously believed, reported The Washington Post in an exclusive.

Her mother had passed the STI to her during childbirth and the tumors were now on Vivienne’s voice box and preventing her from speaking. 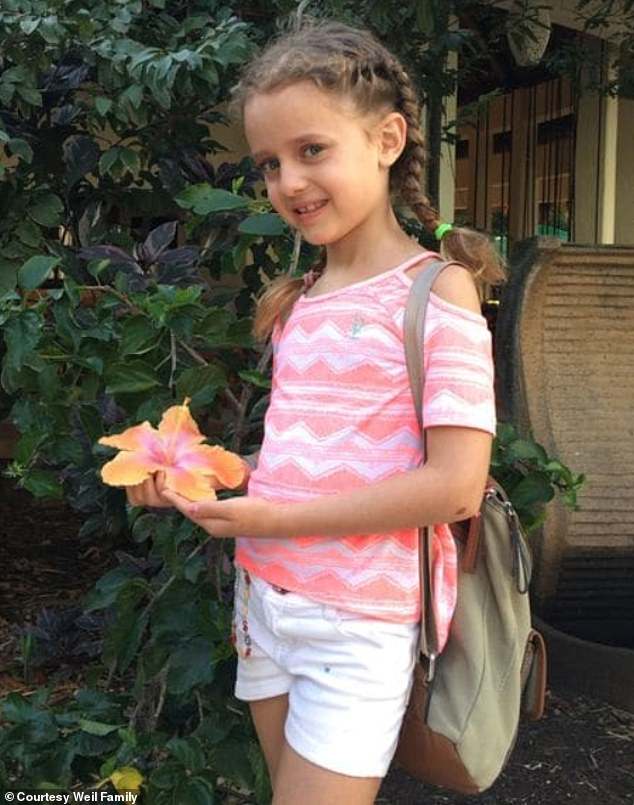 Vivienne Weil, eight (pictured), from Rockville, Maryland, was diagnosed in 2013 with recurrent respiratory papillomatosis, a rare disease caused by two strains of HPV in which tumors grow in the airways

Vivienne’s mother, Natalia, told The Post that her daughter didn’t cry much as a baby and, during her toddler years, her voice was on the raspier side.

The pediatrician blamed Vivienne’s hoarse voice on a cold, and told Natalia and her husband, Jason, that it would improve in time.

‘We were first-time parents and we were worried but thought maybe we worried too much and should wait,’ Natalia told The Post.

‘We decided to give it time. We didn’t know how much children were supposed to talk at the age of one or two…We just did what the doctors told us.’

The pediatrician next diagnosed Vivienne with acid reflux and prescribed a liquid antacid, but that didn’t clear up the problem.

Then, a pediatric ENT diagnosed her with dysphonia, a condition that causes vocal cord spasms, but suggested the family see a pediatric otolaryngologist.

The otolaryngologist used a scope to look down Vivienne’s throat. Testing revealed she had recurrent respiratory papillomatosis (RPP).

RPP is a rare disease caused by two strains of HPV: HPV 6 and HPV 11. It occurs when noncancerous tumors grow in the air passages.

WHAT IS HPV? THE INFECTION LINKED TO 99% OF CERVICAL CANCER CASES

Human papilloma virus (HPV) is the name for a group of viruses that affect your skin and the moist membranes lining your body.

Up to eight out of 10 people will be infected with the virus at some point in their lives.

There are more than 100 types of HPV. Around 30 of which can affect the genital area. Genital HPV infections are common and highly contagious.

Many people never show symptoms, as they can arise years after infection, and the majority of cases go away without treatment.

It can lead to genital warts, and is also known to cause cervical cancer by creating an abnormal tissue growth.

Annually, an average of 38,000 cases of HPV-related cancers are diagnosed in the US, 3,100 cases of cervical cancer in the UK and around 2,000 other cancers in men.

HPV can also cause cancers of the throat, neck, tongue, tonsils, vulva, vagina, penis or anus. It can take years for cancer to develop.

According to the National Institute on Deafness and Other Communication Disorders, these tumors can grow almost anywhere in the respiratory tract but are most common on the voice box.

HPV is passed through sexual contact or when a pregnant mother with genital warts passed HPV 6 or HPV 11 to an infant during delivery – but we don’t know why some people develop these tumors.

Natalia told The Post she had no idea that she ever had genital warts. Most people clear themselves of the infection without ever knowing they had it.

The Centers for Disease Control and Prevention (CDC) estimates the incidence rate of RPP to be two or fewer per 100,000 children under age 18 in the US.

In the US, the HPV vaccine is offered in two or three doses over the course of six months to girls who are between 11 and 12.

However, once RPP develops, there is no cure. Surgery is the most common treatment for removing tumors, and often multiple procedures are needed because the tumors can grow back.

The pediatric ENT told Jason and Natalia that the tumors were quite large, almost entirely blocking Vivienne’s airway.

If they’d continued growing, she could easily have suffocated.

‘I was speechless,’ Natalia told The Post. ‘I thought: “I gave this to my baby.”

‘I remember sitting in that little room and thinking, “She’ll have to deal with this forever.”‘

Doctors performed the first surgery on Vivienne in November 2013, ‘shaving off’ the tumors, reported The Post.

For the first time in years, Jason and Natalia heard their daughter’s voice loud and clear.

But the incurable tumors would grow back.

As they built back up in Vivienne’s airway her voice quieted again.

To keep Vivienne breathing and speaking, she would need surgery two to three times a year.

Things took a turn for the worse in March 2018 when, even after an eleventh operation, Vivienne’s voice stayed at a whisper.

Her parents waited for her vocal cords to strengthen and took her to speech therapists, but nothing worked.

The Weils researched feverishly for another method when they were contacted a by a woman in California whose daughter also has RPP, they told The Post.

The mother suggested they find a doctor who uses a potassium titanyl phosphate (KTP) laser, which is believed to do little to no damage to the vocal cords, according to The Post.

When she first tried to make an appointment with Dr Best, he declined because he doesn’t deal with pediatric cases, but he eventually agreed.

At long last, Dr Best undertook his first operation on Vivienne in November 2018.

Restoring her voice would be a slow process. He told The Post he treats one vocal cord at a time to prevent them from sticking together.

The surgery worked, although her voice was hoarse. After two more surgeries, the little girl could once again speak at full volume.

‘This is the best she has ever sounded,’ Natalia told The Post.

She said that even though she knows Vivienne will need more surgeries, she loves hearing her daughter speak.

‘She says that having a voice is even better than she thought it would be,’ Natalia said.

Coronavirus vaccination: When is it coming? Should I get it?