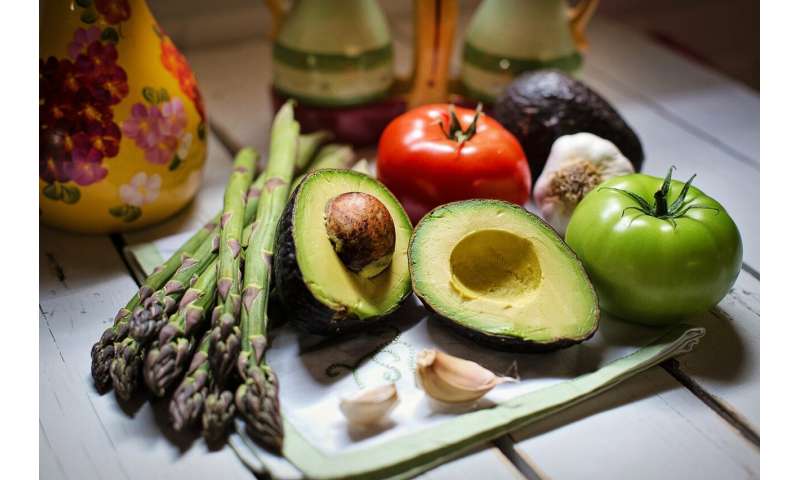 Vegetarians may be on to something: It’s entirely possible to get the National Academy of Medicine’s recommended amount of protein without eating meat.

Americans consume the most protein in the world, and they eat the most meat, according to an article published Feb. 6 in Nutrition Reviews. The article, a literature review, analyzes recent protein consumption nationwide. Yet gorging oneself on protein doesn’t yield health benefits. In fact, excess calories—in the form of protein or anything else—end up stored as carbohydrate or fat and can lead to weight gain. What’s more, studies have shown that raising enough livestock to satiate current American meat consumption contributes substantially to carbon emissions and requires trillions of gallons of water.

In the article, nutrition scientist Christopher Gardner, Ph.D., professor of medicine at Stanford and the Rehnborg Farquhar Professor, and his co-authors recommend steps that individuals can take to curb carbon emissions and reduce the resources required to raise livestock, as well as improve their health.

In a conversation with science writer Hanae Armitage, Gardner discussed the problems with current protein consumption and how much individuals should be eating, as well as how he thinks the two can be reconciled in a way that will benefit the environment.

1. The review estimates that the average person in the United States consumes about 200 pounds of meat in one year. How much protein does a person really need?

Gardner: The data we cite from the Food and Agricultural Organization encompasses meat intake in more than 150 countries and concludes that more meat per person is consumed in the United States than in any other country. The United States government’s guidelines have a “recommended daily allowance” that amounts to 0.36 grams of protein per pound of body weight per day. That equals 45 grams of proteinfor someone weighing 125 pounds, and 64 grams for someone weighing 175 pounds. But what’s important to note is that this estimation already has a built-in buffer to account for variability across the population. The majority of people should interpret the recommended allowance as an amount with a buffer, not as a minimum requirement. If the entire population consumed the recommended daily allowance of protein, 97.5 percent would meet or exceed their requirement. And yet the average woman in the United States eats about 80 grams per day, and the average man about 100 grams per day. And that’s before adding protein bars, protein shakes and protein powders.

2. Does it matter if you get your protein by consuming plants or meat?

Gardner: In terms of meeting your protein requirement, it really doesn’t. Protein contains the same 20 amino acids, regardless of where it comes from. It isn’t the amount of protein consumed as much as the proportions of amino acids, which make up proteins, that matter most. Meat and animal products have amino acid proportions that align perfectly with human needs. Plants aren’t aligned as perfectly, but they’re really close—so much so that it doesn’t matter if there isn’t any meat in your diet. You can still get the needed proportions of amino acids from plants. A lot of people think that plants don’t have enough total protein to meet human requirements. But the truth is vegetarians and vegans usually meet and exceed their protein requirement as long as they’re eating a reasonable variety of foods.

But there are other things to consider: Animal foods don’t have fiber, and plant foods generally don’t have saturated fat. In this sense, it’s actually more beneficial to choose plant foods over animal foods.

3. What’s the connection between meat consumption, greenhouse gas emissions and water use?

Gardner: Over the last decade, concerns about greenhouse gasses and water usage have grown to states of urgency and emergency. There are now dozens of published analyses demonstrating that current agricultural practices are contributing substantially to accelerating global warming, and changes in agricultural practices will be essential to addressing climate change. This is particularly true of raising livestock, beef and dairy in particular, which is far more negatively impactful on resources than growing plant foods, which is relatively less resource-intensive and produces less greenhouse gas.

4. Do you recommend a cutback in protein? How would that help reduce the impact on natural resources?

Gardner: Given that many, if not most, Americans eat twice the amount of protein they require, there is substantial room to consume less protein and still easily meet individual needs. Most people could choose a vegetarian or even a vegan diet and still meet their protein needs—but I don’t think that is realistic or necessary. I would recommend two things: eating less protein in general and shifting the source of some protein from animal to plant foods. Keep in mind that, beyond protein, this shift to a more plant-based diet is now consistent with the recommendations of every public health organization regarding improving human health. In our paper, we modeled the impact of individuals consuming 25 percent less protein, and also shifting 25 percent of the remaining protein that they consume from animal to plant protein. For the average American that would mean still getting most of their protein from animal foods, about a 60-40 split. By our estimates, that 25-percent-less-and-25-percent-shift recommendation would result in 40 percent lower carbon dioxide emissions from food production-related sources, which would be equivalent to about 8 percent of the greenhouse gas emissions reductions originally pledged by the United States under the Paris Climate Agreement. The shift would also equate to a 10 percent decrease in water consumption—about 3.1 trillion gallons—relative to current consumption. If the protein shifts were bigger, the impact would be even larger.

5. Are there any large-scale efforts that are in place to help reach this goal of cutting back?