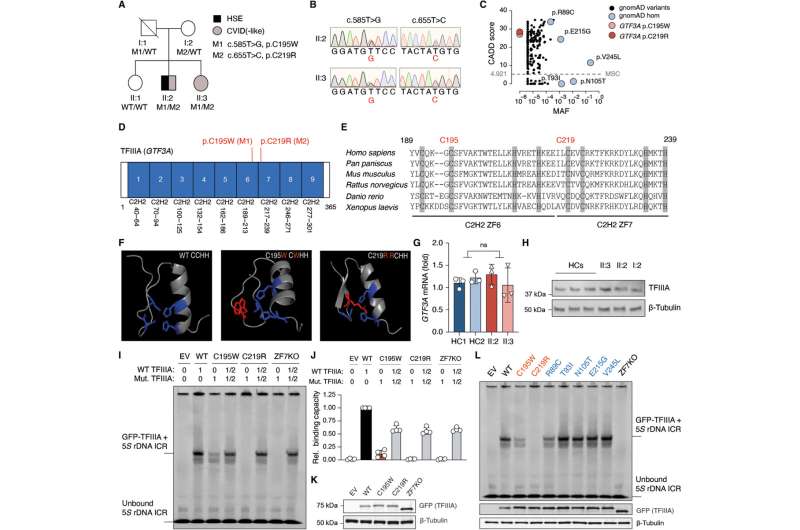 The researchers analyzed genetic data from a patient with immunodeficiency and hospitalized at nine months old with herpes encephalitis, a rare but life-threatening brain inflammation after HSV-1 infection. They identified novel mutations in the gene GTF3A, and found that these mutations impair the innate immune response.

The findings, published in Science Immunology, hold potential as a genetic marker doctors could use to gauge a child’s risk of herpes encephalitis, although such mutations are generally very rare in the population.

Many people are infected in childhood with the HSV-1 virus but the vast majority don’t suffer from encephalitis. The most common symptom of HSV-1 is oral cold sores, but many people show no signs at all. HSV-1 is more threatening to children and adults who are immunodeficient, whose immune system cannot control the virus well.

“Genetic and mechanistic analyses of uncommon viral diseases like herpes encephalitis are quite rare. In fact, the causes underlying severe herpes encephalitis are often unknown,” says Michaela Gack, Ph.D., FRIC’s scientific director. “This information provides us with invaluable insight into the fundamental molecular processes that govern our immune response and opens up opportunities for future research on severe disease outcomes.”

The Ghent research team led by Filomeen Haerynck, M.D., Ph.D., reached out to Dr. Gack’s team after finding the mutations in the gene. Dr. Gack’s lab studies interactions between the human immune system and viruses on a molecular level.

The GTF3A mutations shape how cells respond to viral activity through the genetic makeup of a protein called TFIIIA. TFIIIA plays a role in helping a human enzyme produce certain types of RNA that can determine specific functions inside cells. Some RNAs can elicit an anti-herpes viral immune response.

Dr. Gack’s team tested cells that have the mutations, and found that because of defects in certain immunostimulatory RNAs, the cells were more susceptible to HSV-1 infection and lost the ability to control the HSV-1 virus.

The affected gene is part of the body’s defense system that produces interferons to combat viruses. Interferons are crucial to the human immune response and for suppressing virus infection and spread.

This new genetic pathway could be helpful in understanding the immune response to other viruses, like Epstein-Barr virus, a common virus linked to mononucleosis and associated with certain types of cancer and multiple sclerosis.