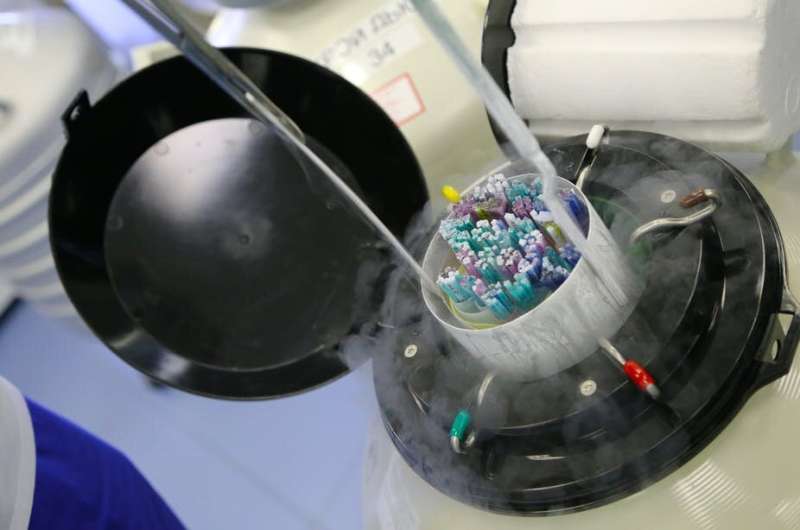 The UK government has just extended the period that gametes (eggs and sperm) and embryos can be stored from ten years to 55 years. While this change will probably be welcomed by people who wish to have fertility treatment, it could have important implications for egg and sperm donors.

A growing number of people in the UK are choosing to freeze their eggs, sperm and embryos for use in their own fertility treatment. Previously, the storage limit was ten years—though extensions were permitted for people who could prove a medical need (such as premature infertility) up to 55 years.

But many felt that the storage limits restricted the choices of people who freeze eggs and sperm for their own fertility treatment. If they couldn’t give a medical reason to increase the storage period, these gametes had to be destroyed after ten years.

Cryopreservation techniques—which involve freezing gametes to preserve them—have also improved significantly since the previous storage limits were set. Studies now show that eggs frozen using current preservation techniques are likely to develop in the same way as fresh eggs. Pregnancy rates from frozen embryos are also equivalent to those using fresh embryo transfer. As such, there is no longer a scientific reason for storage to be restricted to a maximum of ten years.

After launching a public consultation in February 2020, the government has now legislated to extend the storage limit for everyone (regardless of medical need) to 55 years.

Following the change to the storage limit (which took effect on July 1), people will now need to give consent every ten years to continue storing their gametes and embryos for use in their own fertility treatment. However, egg and sperm donors who aren’t seeking fertility treatment won’t be asked to renew consent every ten years—though they will be able to specify upfront whether or not they want their donation stored for up to 55 years.

There are potentially important consequences of these new storage times for both donors and children born from donated eggs or sperm. Although donors are already offered counselling to make sure that they are comfortable with what they are going to do, counselling will now need to address issues raised by the extended storage period. The most significant of these issues is that some donors’ eggs or sperm will be available for use over a considerably longer period than under the previous rules. The obligation that clinics have to ensure donors fully understand the implications of their decision will become even more important as this extension to storage times is implemented.

For example, if a person donates sperm at age 35 and their sperm is stored for 55 years, children might be born from that donation when the donor is 90 years old. This also means that, for the children born from that person’s donation, they might have donor siblings who are older than their parents. Donor-conceived people should be aware of the possibility that their donor might be a very elderly person—or already deceased—and that they may have donor siblings, and possibly nephews and nieces, who are significantly older than them.

This change takes place in the context that, since the law changed in April 2005, donor-conceived people are entitled at age 18 to find out who their donor was.

Fertility professionals are also worried about the speed with which these potentially far-reaching changes are coming into effect—leaving little time for them to prepare. Although the changes have already come into effect, new guidance still needs to be adopted in fertility clinics, and training and instruction provided to staff. Many clinics also haven’t been able to produce updated advice for donors. This is essential for ensuring everyone fully understands what they’re consenting to.

It’s also important to ensure that people seeking fertility treatment with donated eggs and sperm are fully informed about the implications storage-limit changes could have on starting a family this way. Although the European Society for Human Reproduction and Embryology already has information available about what to consider when donating or accessing fertility treatment with donated gametes, it will be important for fertility clinics in the UK to produce their own information reflecting the changes in storage limits.

Bleeding After Reperfusion Contributes to Cardiac Injury in MI