The Ebola outbreak in the Democratic Republic of Congo has now killed more than 700 people, according to figures.

Data from the African nation’s health ministry shows 721 people are now feared dead from the killer virus since the outbreak began last August.

It comes after officials warned last week that the outbreak, which has struck 1,146 people in total, is spreading faster than ever.

Aid workers are struggling to contain the outbreak, considered to be the second worst in history, behind only the 2014 epidemic in West Africa. 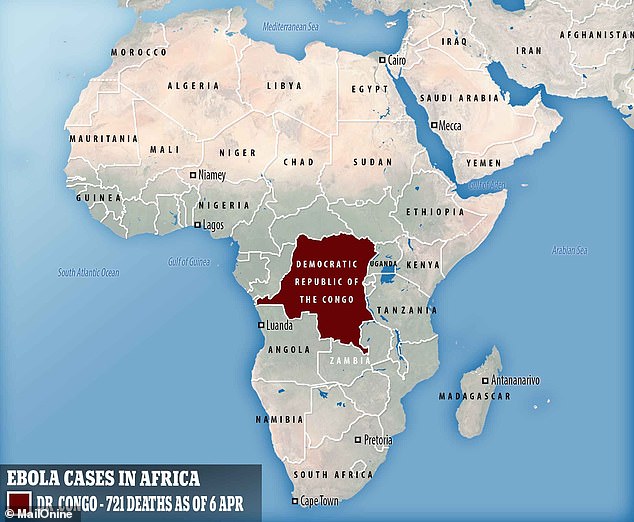 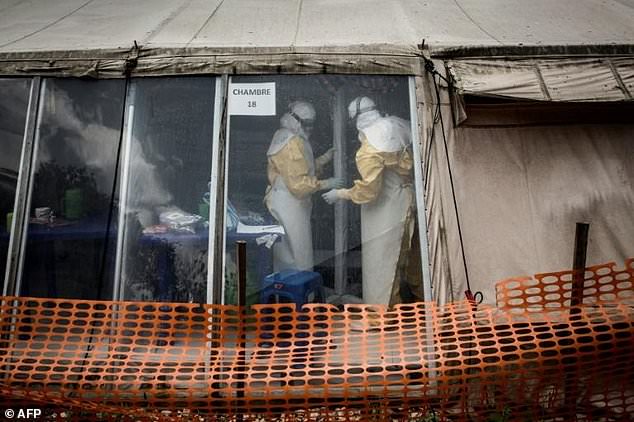 Health personnel work inside the ‘red zone’ of an Ebola treatment centre in Butembo, one of two attacked in recent months

The African nation’s epidemic has been riddled with twists and turns making fighting it more difficult, including the threat of armed militias.

Health workers and quarantine camps have been attacked by militants, and thousands living in the Ebola zones are distrustful of aid workers.

The Democratic Republic of Congo declared its tenth ever outbreak of Ebola last August in northeastern North Kivu province. 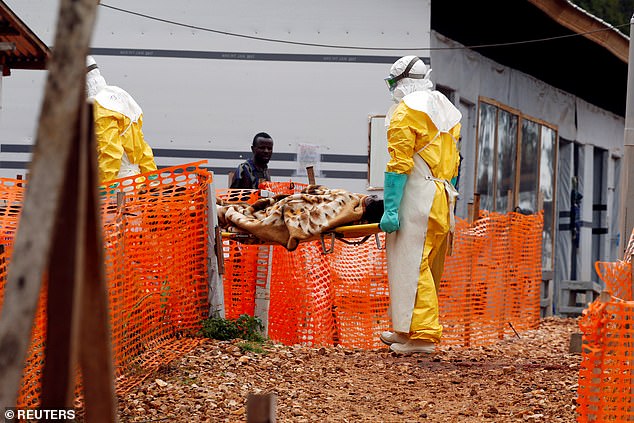 WHAT IS MAKING THIS OUTBREAK DIFFICULT TO STOP?

The current Ebola outbreak in the Democratic Republic of the Congo has been continuing for six months.

Dr Nathalie MacDermott, an expert on Ebola at Imperial College London, shared some of her thoughts on the situation with MailOnline.

Dr MacDermott said: ‘The current outbreak has posed significant challenges to medical teams on the ground.

‘The region has suffered several decades of ongoing conflict and militia activity. This has affected the ability of responders to engage with communities to provide awareness and encourage them to see medical teams early for testing and treatment.

‘There has also been significant risk to medical teams, some of whom have been attacked, and in some cases killed, by fearful community members and militia groups operating in the region.

‘As such, and despite the use of an effective vaccine, the epidemic has continued to spread to different communities.

The World Health Organization has warned that ‘the risk of national and regional spread remains very high’.

Efforts to control the outbreak had been reasonably successful and, just weeks ago, officials hoped it would be over by September.

However, there are now fears the epidemic in the DRC – situated right in the heart of Africa – could rage on for another six months.

The DRC Health Ministry revealed that 95,000 people have now received a dose of an experimental Ebola vaccine.

Two weeks ago, 73 new cases of Ebola were recorded, following 56 in the week before – both were record numbers.

The previous worst weeks, which happened in January and November, had spikes of around 50 cases, according to official data.

And a cause of major alarm for officials is that the cases appear to be spreading in areas situated away from treatment centres.

This means there is a higher chance the patients have spread the infection before they are diagnosed, because it may take longer for them to get treatment.

In the past two months, five Ebola centres have been attacked, some by armed militiamen.

This violence led French medical charity Medecins Sans Frontieres (MSF) to suspend its activities in two of the most affected areas.

Another challenge has been a mistrust of first responders. A quarter of people sampled in two Ebola hotspots did not believe the disease was real, a survey found.

WHAT IS EBOLA AND HOW DEADLY IS IT?

Ebola, a haemorrhagic fever, killed at least 11,000 across the world after it decimated West Africa and spread rapidly over the space of two years.

That epidemic was officially declared over back in January 2016, when Liberia was announced to be Ebola-free by the WHO.

The country, rocked by back-to-back civil wars that ended in 2003, was hit the hardest by the fever, with 40 per cent of the deaths having occurred there.

Sierra Leone reported the highest number of Ebola cases, with nearly of all those infected having been residents of the nation.

WHERE DID IT BEGIN?

An analysis, published in the New England Journal of Medicine, found the outbreak began in Guinea – which neighbours Liberia and Sierra Leone.

A team of international researchers were able to trace the epidemic back to a two-year-old boy in Meliandou – about 400 miles (650km) from the capital, Conakry.

Emile Ouamouno, known more commonly as Patient Zero, may have contracted the deadly virus by playing with bats in a hollow tree, a study suggested.

HOW MANY PEOPLE WERE STRUCK DOWN?

Figures show nearly 29,000 people were infected from Ebola – meaning the virus killed around 40 per cent of those it struck.

Cases and deaths were also reported in Nigeria, Mali and the US – but on a much smaller scale, with 15 fatalities between the three nations.

Health officials in Guinea reported a mysterious bug in the south-eastern regions of the country before the WHO confirmed it was Ebola.

Ebola was first identified by scientists in 1976, but the most recent outbreak dwarfed all other ones recorded in history, figures show.

HOW DID HUMANS CONTRACT THE VIRUS?

Scientists believe Ebola is most often passed to humans by fruit bats, but antelope, porcupines, gorillas and chimpanzees could also be to blame.

It can be transmitted between humans through blood, secretions and other bodily fluids of people – and surfaces – that have been infected.

IS THERE A TREATMENT?

The WHO warns that there is ‘no proven treatment’ for Ebola – but dozens of drugs and jabs are being tested in case of a similarly devastating outbreak.

Hope exists though, after an experimental vaccine, called rVSV-ZEBOV, protected nearly 6,000 people. The results were published in The Lancet journal.