Do water bottles cause cancer? Chemistry expert fact-checks the thriving myth after Tom Brokaw said he has stopped drinking from plastic because he fears it fuels disease

Tom Brokaw said he does not drink out of plastic water bottles anymore after a ‘leading cancer researcher’ suggested they are linked to cancer.

The 79-year-old news anchor, who was diagnosed with multiple myeloma in 2013, stoked the years-old bottle-cancer debate on Tuesday in a video for cancer site SurvivorNet, in which he also revealed he uses medical marijuana.

‘I said, “how come, John, we’ve not been able to get a grip on this and we’re out hunting?”‘ Brokaw recalls.

‘He picked up a water bottle and he said, “I’m not sure these are not involved in some way. We’re working on it.” That was a revelation to me quite honestly. I don’t drink out of them anymore. It was this leading cancer researcher saying, “I don’t have it nailed down but it worries me.”‘

Joe Schwarcz, PhD, a leading chemist and director of the Office for Science and Society at McGill University, told DailyMail.com this thriving myth is problematic.

SCROLL DOWN FOR VIDEO 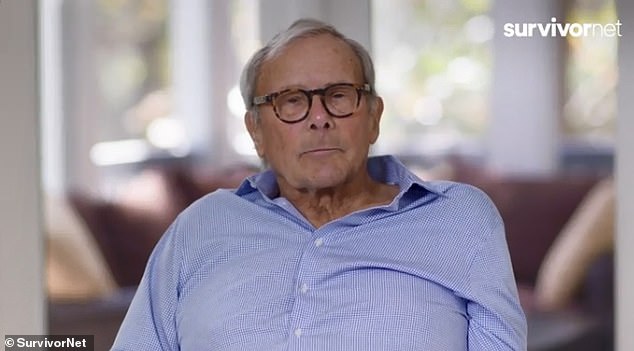 The 79-year-old anchor, who has multiple myeloma, said he does not drink out of plastic water bottles anymore after a ‘leading cancer researcher’ suggested they are linked to cancer

‘You can never prove that something can’t happen. But… there’s a lot of confusion about the material those water bottles are made of.’

Regardless of the material, he says: ‘Only the dose makes the poison. Just because something is deemed to be a carcinogen doesn’t mean it causes cancer in humans.’

The main concern, he says, is over Bisphenol A (BPA), a recognized carcinogen that was once used in baby bottles before they were pulled from the market. Now, BPA, though occasionally used in water cooler carboys, is not used to make the water bottles we drink out of.

Today, the water bottles we buy in stores are made from polyethylene terephthalate (PET), which is regarded as safe for one-time use.

Another plasticizer recognized as a carcinogen is diethylhexylphthalate (DEHP), which is used in bottle caps, but it cannot ‘leach’ chemicals into water to any significant degree.

According to Dr Schwarcz, any phthalates (plasticizers) used in the production of bottled water are trace amounts in larger molecules that cannot leach into the water.

‘The International Agency for Research on Cancer, the IARC, lists known cancer-causing agents, including BPA, but also bacon, that have been shown to be a hazard.

‘In science, we are interested in exposure. Numbers matter.

‘Does he [Tom Brokaw] eat bacon? One could make a far, far stronger case for not eating bacon than not drinking out of water bottles.’

Dr Schwarcz does not, in fact, drink out of plastic water bottles – not for health reasons but environmental ones. ‘It’s an environmental disaster to produce these,’ he said. ‘Every week there’s enough discarded to encircle the globe twice. That’s a tremendous amount of plastic that ends up in the great Pacific garbage patch, which breaks down and is ingested by wildlife. And the plastic is made from oil, which is a non-renewable resource. There’s just no reason for the existence of these water bottles.’

But if cancer is your concern, he says, don’t waste your energy worrying – as many have done over the past decade.

The debate was given a boost in 2007, when breast cancer survivor Sheryl Crow made the same suggestion in an interview with Ellen DeGeneres, saying she was concerned that dangerous chemicals leach from water bottles into the water, particularly after they are left in the heat.

It’s not only celebrities.

Last year, researchers at the State University of New York at Fredonia found significant levels of microplastics in bottled water from various brands.

But another study last year, by researchers at North-West University in South Africa, found high levels of microplastics in tap water, too.

The issue is, Dr Schwarcz says, you would be hard-pressed to cut all carcinogens out of your life, including microplastics which have seeped into all areas of consumption.

‘Cancer is a devastating illness which is multi-faceted,’ Dr Schwarcz said.

‘There are numerous things in the environment that can cause cancer, like chemicals from cooking meat, or arsenic powder, which naturally occurs naturally. We live in a slog of cancer-causing compounds. Some are natural some not.’