Destroying women’s frozen eggs after 10 years is ‘discriminatory’ and they should be kept for longer, fertility campaigners urge government

Women who have frozen their eggs should be allowed to have them stored for longer than 10 years, campaigners have said.

Eggs can be frozen for a long time with latest technology, but legislation says they should be destroyed after ten years.

Experts have now urged the government change its stance, claiming the law is ‘discriminatory’ to women.

Women may end up in a race against time to find a sperm donor, or waste their money if they find themselves infertile at a later stage when their eggs have been destroyed. 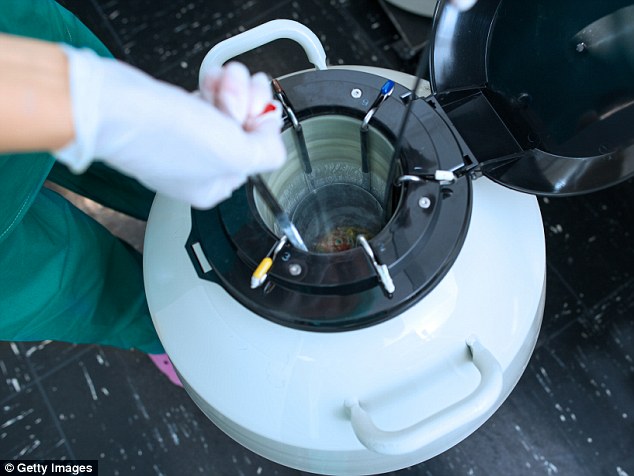 Women who have frozen their eggs should be allowed to have them stored for longer than 10 years, campaigners have said

Sarah Norcross, director of the Progress Educational Trust, a non-profit organisation leading the debate on new developments in fertility, told the BBC: ‘There’s absolutely no biological reason for this law.

‘It’s discriminatory against women and removing an option for them to take charge of their reproductive system.

HOW ARE EGGS FROZEN?

Egg freezing dates back to 1986 when the first pregnancy from a frozen egg was reported in the Lancet Journal.

Collected eggs were preserved in cryogenic tanks after being frozen ‘slowly’ for many years.

Using this process, the temperature of an egg plummets thousands of degrees per minute, resulting in a glass-like cell structure that is stronger than other crystalline ice forms.

They are then stored in cryogenic tanks, for up to 25 years.

In preparation for having her eggs retrieved, a woman must undergo the first stage of an IVF cycle, which uses hormones to stimulate more eggs into maturity, then another set of hormones to trigger the eggs’ release.

Patients inject these drugs at home and are usually closely monitored by their doctors.

There are many different forms of these hormone treatments, ranging in cost from about $800 to $6,000 per cycle, and six to 10 weeks in duration.

Then, the eggs are surgically retrieved in a minimally-invasive procedure.

Other experts weighed in on the Victoria Derbyshire programme, saying that the limit in the UK was out-dated considering the developments in the field.

The ten-year law was brought in with the 1990 Human Fertilisation and Embryology Act, but the government has said an extension ‘would be a significant policy change’.

The limits were originally introduced because the risks of long-term storage were unknown at that point.

The storage period is extended to 55 years for women who show that they are prematurely infertile, for example experiencing an early menopause.

But a new freezing method called vitrification has been demonstrating higher success rates, with the ability to freeze eggs for longer and without deterioration.

With a ten year time limit, campaigners said growing numbers of women end up unable to use their eggs.

They may rush into using a sperm donor so they are able to freeze an embryo – which also has a limit of ten years.

Sabrina Maydew found herself in that position, and said the process was ‘terrible’.

She froze her eggs in her late 20s, spurred on after reading a newspaper article.

The ten years came round quicker than she realised, and she began searching for a sperm donor last year.

She told the BBC: ‘I reluctantly chose to use donor sperm – I was literally crying on the computer trying to choose.’

However, just before the deadline, in December, she had results from a scan that revealed she had ‘huge fibroids and thinning of the linings in my ovary’, meaning she was potentially prematurely infertile.

Mrs Maydew’s eggs would be frozen for 55 years. She said: ‘I’m probably the only person who found out she was prematurely infertile and jumped for joy.

‘I think now that I’ve actually chosen a sperm donor I may well go on with that, but the process was terrible and unnecessary.’

Women deciding if they should freeze their eggs, costing around £5,000 in the UK, must weigh up a complex set of odds.

The success rate for conceiving is higher the younger you are when you freeze eggs, and so experts recommend doing so before the age of 35.

However, women who freeze their eggs in their 20s are more likely to conceive naturally, making it a waste of money.

For example, if a women was to freeze her eggs at 25, the eggs would be destroyed at the age of 35, before she has possibly considered having a family.

She may also find out she is infertile at the age of 37, and at this point be advised to use donor eggs at another cost.

But if a woman was to wait and freeze her eggs at the age of 35, her fertility would already be in decline, making the process more expensive (for more cycles) and possibly less successful.

Prostate cancer symptoms: Having this colour pee could be a sign of the deadly disease