A measles outbreak in Samoa has now killed 53 people, most of whom are babies and children under the age of four.

Three children from the same family – including 18-month-old twins – were among the latest victims to be struck down by the killer infection over the weekend.

Low vaccination rates have allowed measles to rapidly spread. Figures show 3,728 people have been infected since the outbreak began in late October.

Samoa declared a national emergency last month. Health bosses ordered that all 200,000 people living on the Pacific island get vaccinated. 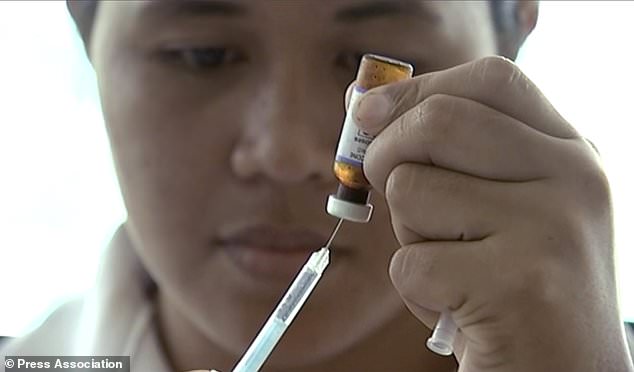 The death toll of a killer measles outbreak in Samoa has climbed to 53.  Most of the victims have been babies and young infants, including 23 children who hadn’t reached their first birthday yet (stock) 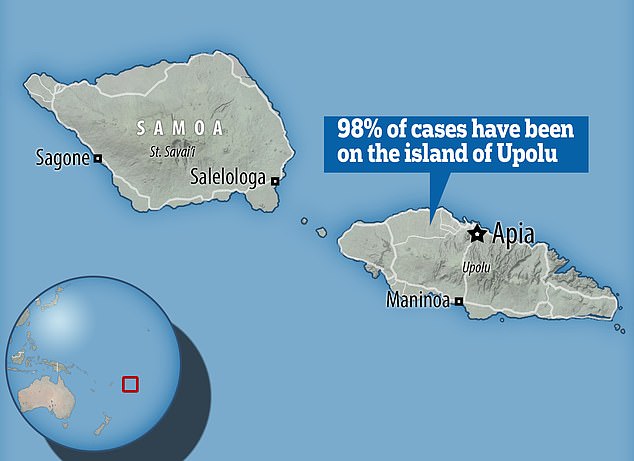 The vast majority of the outbreak has taken place on the island of Upolu, which is known for its white sand beaches

The government has also closed all schools and banned children from going out in public until the outbreak is contained.

In all, 53 people have died in the outbreak since late October, including one adult and two older teenagers.

Most of the victims have been babies and young children, including 23 who hadn’t reached their first birthday yet, and the rest aged between one and four.

Mother Fa’oso and father Paulo Tuivale Puelua lost three out of their five children to measles over the weekend. None of the children were immunised.

Their three-year-old son was taken to hospital after breaking out in a rash and treated for measles.

He was given the all-clear and sent home, but a day later his rash came back and he was taken back to hospital, according to the New Zealand-based media outlet Stuff. Within two hours he was killed.

Less than a week later, the couple’s 18-month-old twins, Tamara and Sale contracted the infection and died. The children are survived by their older brothers, aged four and six.

Officials blamed an anti-vaccination movement for causing jab rates to plummet – in 2018 only a third of children under five had theirs.

They believe the virus was spread by a traveller from New Zealand, which suffered a measles outbreak in September

Fears were raised about the MMR vaccination last year when two babies died within minutes of receiving the jab.

The government briefly suspended its immunisation programme while the cases were investigated.

When it later emerged the babies were killed by a medical blunder, the public’s trust in the jab had already been dented. 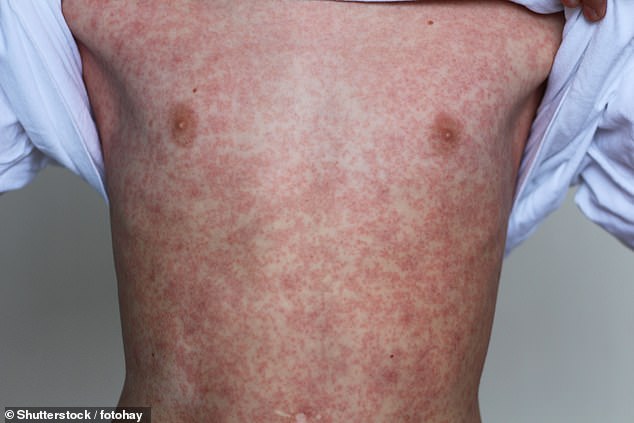 The Samoan government has scrambled to vaccinate a quarter of the population (57,000 out of 200,000) since the outbreak began. But overstretched medical services are struggling to contain the outbreak.

It said more than 1,100 people had been admitted to hospital since the outbreak began. Some 180 people remain in hospital, including 19 children who are in a critical condition.

A team of British doctors and nurses were dispatched to the pacific nation last week to help tackle the crisis.

The group of 13 left for the Pacific nation from Manchester Airport to the main hospital in Samoa’s capital Apia to treat infected children.

International Development Secretary Alok Sharma said: ‘This deadly measles outbreak is having a devastating impact on the people of Samoa, particularly children, who urgently need our help.

‘The UK is stepping up to do all we can to prevent the further loss of life.’

Measles has been largely wiped out in developed countries like the US and UK thanks to national vaccination programs, but it is deadly and spreads extremely fast in areas where people haven’t had the jab.

Children are the most vulnerable to the disease, which typically causes a rash and fever but can also lead to brain damage and death.

Schools and kindergartens have been closed and children have been banned from public gatherings, such as church services, to minimise the risk of contagion.

High blood pressure: Study finds novel approach to lowering bp – could this work for you?

Say goodbye to sore throat with these home remedies