Could pomegranate treat IBD? Compound found in the fruit can ‘relieve symptoms of the agonising condition’

Natural polyphenols in the fruit have been found to interact with gut bacteria to produce a compound with anti-inflammatory effects.

The researchers, at the University of Louisville in Kentucky said their discovery highlights the importance of gut health to protect from IBD, the umbrella term for Crohn’s and ulcerative colitis.

Around 1.6million people in the US and 261,000 in the UK have inflammatory bowel disease, according to figures from leading charities. 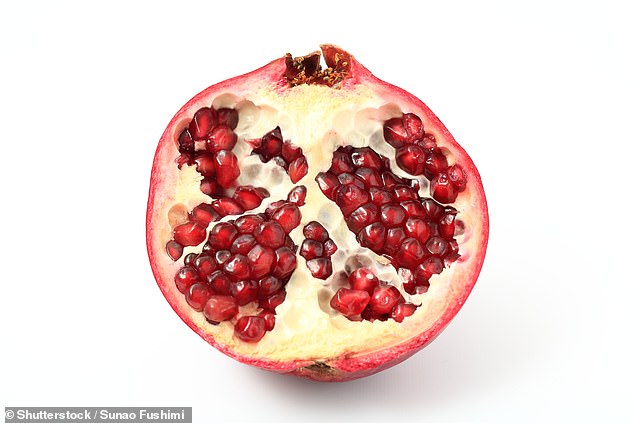 Natural polyphenols in pomegranate has been found to interact with gut bacteria to produce a compound with anti-inflammatory effects, which could help people with IBD

The researchers discovered a metabolite called urolithin A (UroA) is produced as a result of polyphenols in fruits and gut bacteria interacting.

Polyphenols are present in pomegranates and other berries such as strawberries, blackberries and raspberries.

It’s specifically ellagic acid which interacts with a strain of bacteria in the gut (INIA P815 strain of Bifidobacterium pseudocatenulatum), releasing UroA in the process.

This has anti-inflammatory, anti-oxidative, and anti-ageing benefits, the researchers led by Dr Venkatakrishna Rao Jala said.

This would have positive effects on the long-term inflammation in the stomach, oesophagus and intestines in people with IBD.

WHAT IS INFLAMMATORY BOWEL DISEASE?

Inflammatory bowel disease (IBD) is a medical term that describes a group of conditions in which the intestines become inflamed (red and swollen).

Ulcerative colitis affects the large intestine (colon) whereas Crohn’s disease can occur in any part of the intestines.

People of any age can get IBD, but it’s usually diagnosed between the ages of 15 and 40.

The conditions and chronic and cannot be cured so treatment usually relies on medication and lifestyle changes to manage the symptoms, but may include surgery.

The team developed a synthetic equivalent of UroA called UAS03, which has the same, if not a stronger, therapeutic effect in the case of IBD.

In animal testing, the team showed how UroA and UAS03 increase proteins that tighten epithelial cell junctions in the gut.

‘Tight junctions’ prevent the gut from leaking, and previous research has shown that tight junction proteins are decreased in those with IBD.

Dr Rajbir Singh, the first study author said: ‘The general belief thus far in the field is that urolithins [such as UroA and UAS03] exert beneficial effects through their anti-inflammatory, anti-oxidative properties.

‘We have for the first time discovered that their mode of function also includes repairing the gut barrier dysfunction and maintaining barrier integrity.’

Variations in UroA levels vary from one individual to another, as our gut bacteria is different.

Sometimes it may not be present at all, the researchers said.

Therefore, the supplementation of UroA could overcome this and offer health benefits.

Dr Jala said: ‘Microbes in our gut have evolved to generate beneficial microbial metabolites in the vicinity of the gut barrier.

‘However, this requires that we protect and harbor the appropriate gut microbiota and consume a healthy diet.

Foods, such as pomegranate, would have a positive effect, but the use of the synthetic UAS03 would be stronger and have a bigger impact, the team believe.

Further experiments and clinical testing are needed to test if the encouragement of UroA in the gut would help those suffering.

But it is promising for the treatment for not only for IBD, but many other areas of health, the researchers said.

The researchers reported their findings in the journal Nature Communications.

How to get rid of visceral fat: Three drinks to help you reduce the dangerous belly fat

Home and Away spoilers: Dean kisses Ziggy – but has he made a mistake?