Over 6.3 million doses of COVID-19 vaccine have been administered to children aged 12-17 years as of June 7, according to data from the Centers for Disease Control and Prevention. 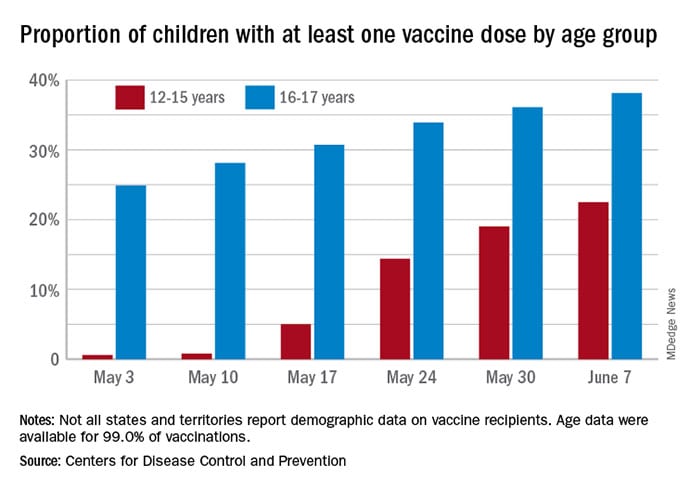 People considered fully vaccinated are those who have received the second dose of a two-dose series or one dose of a single-shot vaccine, but children under age 18 years are eligible only for the Pfizer-BioNTech version, the CDC noted.

Meanwhile, back on the incidence side of the COVID-19 pandemic, the number of new cases in U.S. children for the week ending June 3 was at its lowest point (16,281) since mid-June of 2020, according to a report from the American Academy of Pediatrics and the Children’s Hospital Association.

Cases among children now total 3.99 million, which represents 14.1% of cases among all ages, a proportion that hasn’t increased since mid-May, which hasn’t happened since the two groups started keeping track in mid-April of 2020 in the 49 states (excluding New York), the District of Columbia, New York City, Puerto Rico, and Guam that report such data by age.

Less encouraging was the CDC’s report that “COVID-19-associated hospitalization rates among adolescents ages 12-17 years increased during March and April, following declines in January and February 2021.”

Children have been experiencing much lower rates of severe disease than those of adults throughout the pandemic, the CDC pointed out, but “recent increases in COVID-19-associated hospitalization rates and the potential for severe disease in adolescents reinforce the importance of continued prevention strategies, including vaccination and the correct and consistent use of masks in those who are not yet fully vaccinated.”

This article originally appeared on MDedge.com, part of the Medscape Professional Network.

A hidden truth: Hospital faucets are often home to slime and biofilm

5 Reasons Your Feet are Weirdly Swollen