British military has used chromium-based paint linked to cancer on its tanks, 4x4s and armoured personnel carriers despite the substance being banned for many lines of manufacturing in 2003

Military vehicles in the UK have been painted with a toxic, cancer-causing chemical as recently as last year.

Chromium VI has been linked to various cancers and was officially listed as hazardous by the EU in 2003 when it was banned in some manufacturing.

However, it was still being used to paint military vehicles in the UK as recently as December last year, The Times reported.

The Ministry of Defence said it has now stopped using paint containing the chemical as a Scottish MP said it was ‘simply incredible’ it hadn’t stopped earlier. 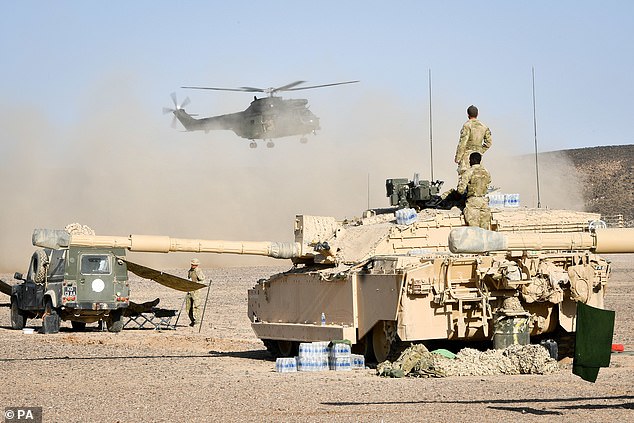 British military vehicles were still being painted with a known cancer-causing chemical, chromium VI, as recently as December, the Government has admitted (Pictured: UK forces on exercise in Oman in October 2018)

It is unknown whether any military staff have had their health affected by the use of chromium VI, known chemically as hexavalent chromium.

Used to prevent metals from rusting, chromium has been linked to cancers in the lungs, stomach and gut if it is inhaled or digested. It is found in tobacco smoke.

A heavy metal, it can damage DNA and cells in the human body by reacting with oxygen in the body and disrupting the balance of molecules inside tissue.

Paints containing chromium VI are not allowed for certain manufacturing in Europe – including on children’s toys, cars, electronics and aeroplane parts – because of an EU rule.

But the chemical is still used to make shiny metallic plating on packaging, jewellery and household fittings, according to industry news website Chemicals Technology.

HOW CAN CHROMIUM CAUSE CANCER?

Chromium (VI) is a heavy metal which has been linked to cancers in the stomach, intestines and lungs.

The chemical is used in paint because it prevents corrosion, meaning it can stop metal from rusting.

But inhaling or digesting toxic chromium VI can damage cells, DNA and tissues inside the human body because it can’t be broken down.

Inside the body the chemical can trigger a process called oxidative stress, which is when there is an upset in the balance between antioxidants and potentially dangerous molecules which react with oxygen (free radicals).

If free radicals cannot be controlled they can take electric charges from other molecules in the body, disrupting how they work and potentially causing DNA damage which can lead to tumours forming.

Sources: US National Library of Medicine and British Medical Journal

Martin Docherty-Hughes, an SNP MP, told The Herald: ‘It is simply incredible that, decades after the dangers of hexavalent chromium became known, the MoD is still using a noxious, cancer-causing chemical, especially as it has been so controversial in other countries.’

Defence minister Stuart Andrew yesterday said the paint, which had been used on 4x4s, tanks and armoured vehicles, was still in use in December.

But it was phased out completely in January, according to the Ministry of Defence, and any leftover paints have been disposed of.

The MoD also said there had been ‘minimal use’ of the paints while they were being phased out, and they were only used by fully-trained personnel with specialised equipment.

It said in a statement: ‘Hexavalent chromium paint is no longer applied to any of our armoured vehicles and all existing vehicles will be repainted with chromate-free paint.’

The Dutch ministry of defence last year agreed to give compensation to staff who became ill after working with chromium paint at NATO depots between 1984 and 2006.

Junior defense minister Barbara Visser said at the time the government had ‘neglected to adequately protect’ its employees.

Scottish MP Mr Docherty-Hughes added: ‘As we have seen in the cases of asbestos in defence platforms or of the anti-malarial drug Lariam prescribed to serving personnel, the MoD often needs to be dragged kicking and screaming into addressing the most basic issues of health and safety.’