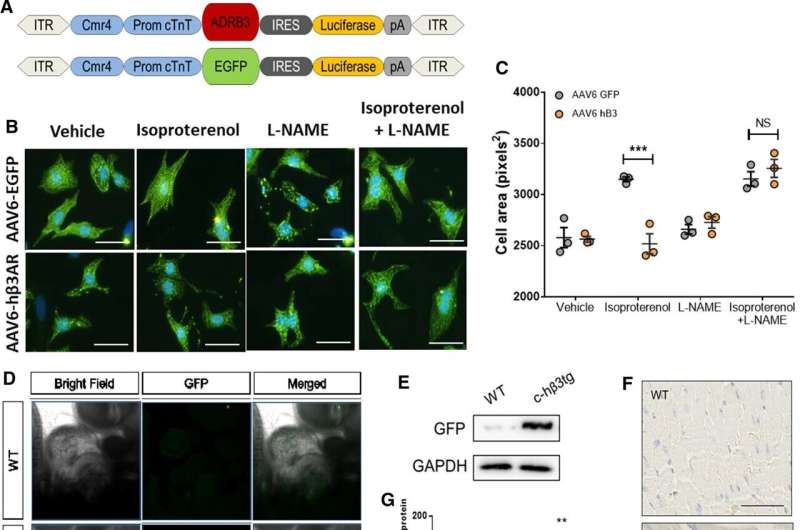 Scientists at the Centro Nacional de Investigaciones Cardiovasculares (CNIC) have identified a new therapeutic target for the prevention of heart failure linked to aortic stenosis. The study was led by Dr. Borja Ibáñez, Clinical Research Director at the CNIC, cardiologist at Hospital Universitario Fundación Jiménez Díaz, and member of the Spanish cardiovascular research network (CiberCV).

The study shows that overexpression in cardiac muscle cells of beta-3 adrenergic receptor, a member of the beta adrenergic system, can prevent or even reverse heart failure in a mouse model of aortic stenosis, a condition that currently has few therapeutic options.

In the study, published in Basic Research in Cardiology, the CNIC team adopted an innovative gene-therapy approach to boost the expression of this receptor in the heart and thus reinforce its beneficial action.

“Gene therapy has an enormous potential for the treatment of cardiac diseases. The next step will be to investigate this approach in animals with a heart more similar to that of humans, such as pigs, and then design a pilot clinical trial to translate these promising results to patients,” explained study co-author and CNIC General Director Dr. Valentín Fuster.

Aortic stenosis is a progressive narrowing of the aortic valve, a “floodgate” through which blood flows from the heart to the rest of the body. The progressive obstruction of the aortic valve impedes the supply of blood to the body organs and causes pressure to build within the heart. The extra force required to expel blood with each heartbeat generates a physical stress that deteriorates the heart muscle. The condition is currently treated by replacing the damaged valve with a prosthesis.

While valve replacement technology has become much less invasive and successfully recovers valve function, Dr. Ibáñez explained that the cardiac muscle, after years of being subject to stress, does not recover. Unfortunately, there is a lack of treatments able to improve cardiac muscle function and thereby alleviate heart failure resulting from a long history of aortic stenosis.

In addition to the CNIC team led by Dr. Ibáñez’s team, the study had input from groups based in Italy and the U.S.. The study exploited the beneficial properties of stimulating the beta-3 adrenergic receptor, which is abundant in adipose tissue and the bladder but weakly expressed in the heart. Previous research had shown that stimulation of this receptor, despite its low expression in the heart, has potentially beneficial effects on cardiac diseases.

Using rat heart muscle cells (cardiomyocytes) grown in culture, the researchers found that forced expression of beta-3 adrenergic receptor inhibited the hypertrophic growth of these cells when they were exposed to a hormonal stimulus.

Through a collaboration with the CNIC Intercellular Signaling in Cardiovascular Development and Disease group, led by Dr. Jose Luis de la Pompa, transgenic mice were generated that overexpress the beta-3 adrenergic receptor in cardiomyocytes.

“When these mice were subjected to supravalvular aortic stenosis, they developed less cardiac hypertrophy and fibrosis than mice with normal levels of expression. The transgenic mice were also free of heart failure, and their hearts were metabolically more efficient and consumed less glucose,” explained Dr. Andrés Pun, first author on the study.

These results prompted the scientists to study the cardiomyocytes’ mitochondria, the energy production hubs in cells. “Because heart muscle has such high energy requirements, any damage to its mitochondria can have catastrophic consequences, as frequently occurs in heart failure,” said Dr. Pun.

In healthy hearts, mitochondria mainly burn fatty acids, which provide a highly efficient generation of abundant amounts of energy. Nevertheless, said Dr. Pun, “the failing heart often switches to the use of glucose, a much less efficient energy source, and this contributes to the progression of the disease.”

In addition, the mitochondria of the failing heart are unable to fuse efficiently and are therefore smaller and more prone to accumulating injuries. The investigators found that the cardiomyocyte mitochondria in the transgenic mice were much larger and healthier.

Since the transgenic technology used to develop these mice is not applicable in patients, the investigators developed a gene therapy approach, whereby an innocuous virus was injected into mice to deliver the beta-3 adrenergic receptor gene specifically to cardiomyocytes, resulting in safe and efficient production of the receptor.

Working in partnership with the CNIC Viral Vectors Unit, the team designed an innocuous virus able to enter cardiomyocytes and drive elevated expression of beta-3 adrenergic receptor in the hearts of non-transgenic adult mice. When these mice were subjected to aortic stenosis, they were as equally protected against heart failure as transgenic mice overexpressing the receptor from before birth.