Doja Cat's Planet Her is more than just a fun album to listen to on repeat and sing along to at the top of your lungs with friends. (You know which lyric I'm talking about.) It's spawned vibrant music videos and viral TikTok trends that have taken us into an alternate dreamy, iridescent universe — a joyful respite from our typical, chaotic world.

At the end of the day, Doja Cat, like us, retreats back to this earthly realm, though. She recently moved into a new home surrounded by nature-inspired decor, as she tells Allure over Zoom. (Her username, on which, is Nicholas Cage, by the way.) Among wooden elements and minty touches, the performer is the brightest fixture.

On September 25, Doja Cat is officially fusing her contrasting imaginary and tangible worlds with her first-ever makeup collection, which she started creating in collaboration with BH Cosmetics a year ago. "Everything is beautifully intertwined and connected down to every last detail," Yannis Rodocanachi, the brand's CEO, tells Allure. "With [Planet Her] in mind, we created our packaging together with glamourous gold foil and psychedelic mushrooms to be consistent with what she's putting out musically."

The most representative part of Doja's prismatic paradise being translated into a beauty line is the 36-shade Mega Shadow Palette ($36) of what can best be described as earthy brights. She points out Orchid, a matte fuchsia, and Flora, a shimmery magenta. They live alongside Fern, a metallic forest green, and Sunflower, a bronzed gold — just as they naturally occur in, well, nature. "I wanted it to feel like we're in the wild," Doja explains. "It's [all about] exploring and learning about the different tones of nature." 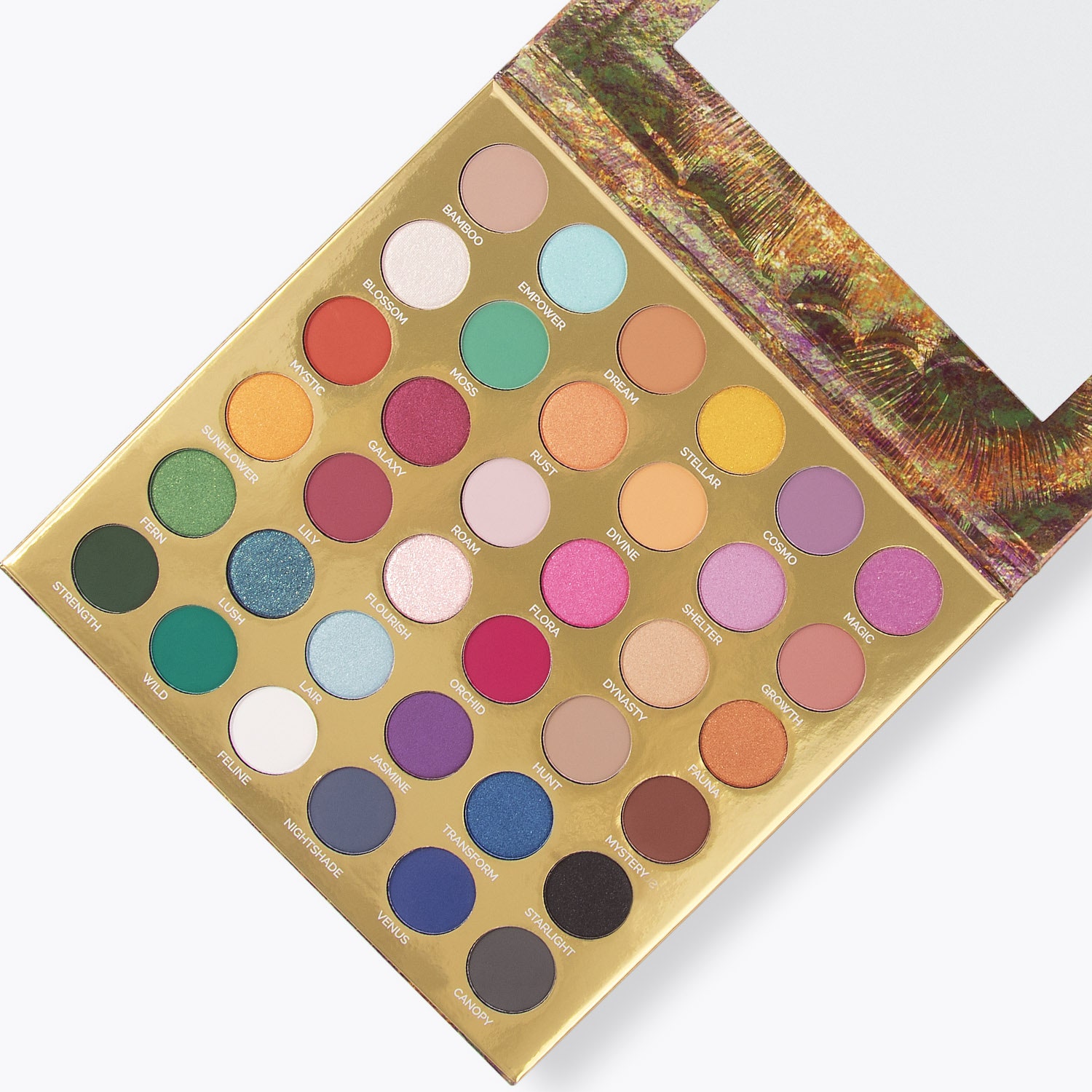 Long before she started calling herself Doja Cat, the singer was fixated on her very own color expedition. Coincidentally enough, she bought her first rainbow eye shadow palette from BH Cosmetics when she was 14. Since then, the now 25-year-old has been hellbent on mastering a monochromatic smoky eye look — think several shades of blue, green, or pink blended together for a multidimensional moment free of browns or blacks. 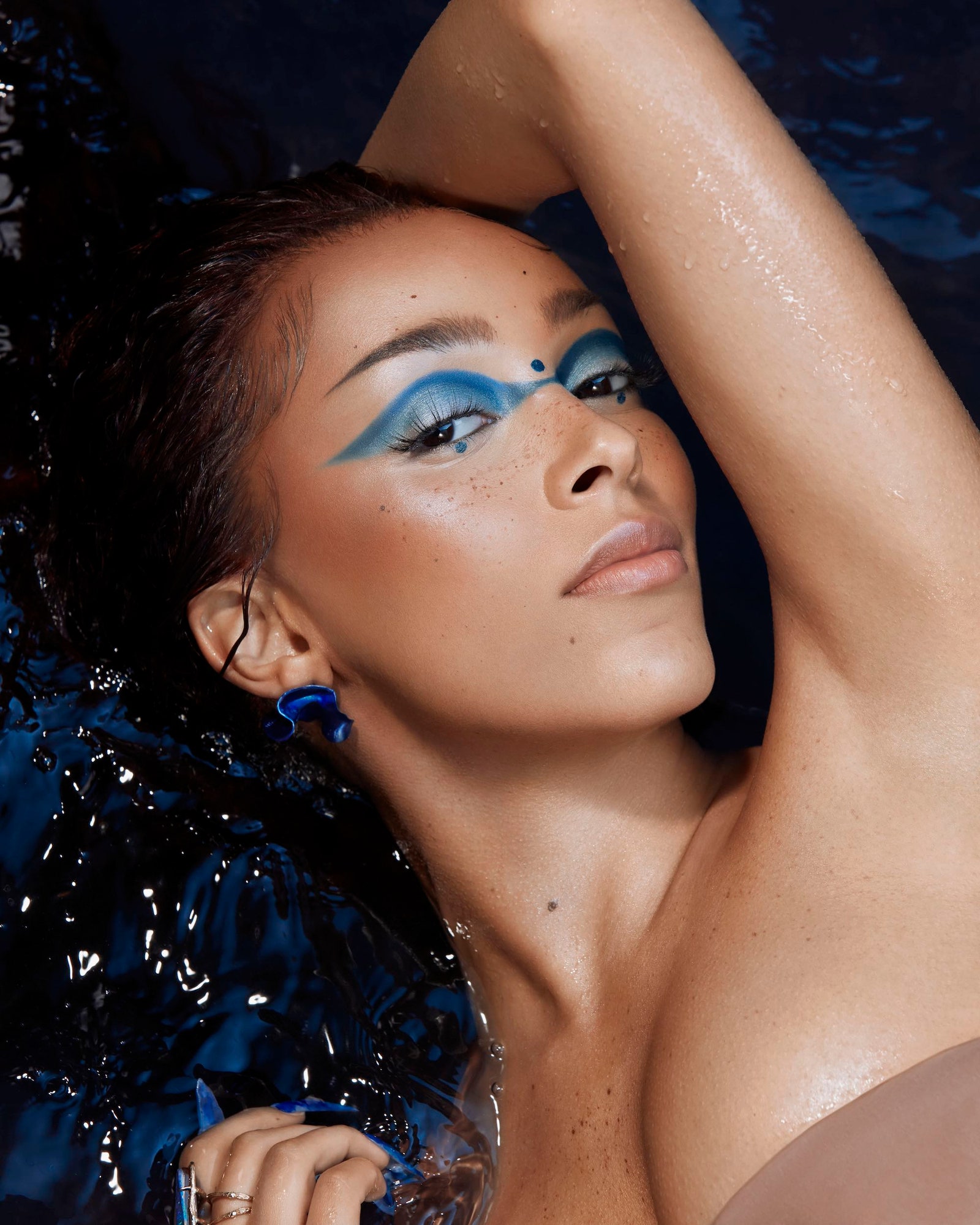 For years, Doja felt like she was cursed to never figure out how to nail the technique. Many palettes didn't deliver all the shadows she needed in one place, and their formulas were always too dry and patchy for seamlessly blending together. When putting together her own makeup line, Doja Cat vowed to make this look as easy as possible for others. "I really wanted to see that happen when people got these products," she says.

I can personally attest to how easy it is to put together a single-color eye makeup moment. With green as my guide, I layered Empower, Moss, Wild, and Strength — in that order — for the green goddess look Doja always dream of. (I hope I made you proud!) All of the shadows packed just the pigmentation I wanted with one swipe and minimal blending needed. I also topped my lips with the Mirage Lip Balm in Heavy Tint ($9) and a bit of the Muse Plumping Lip Gloss in Berry ($12). 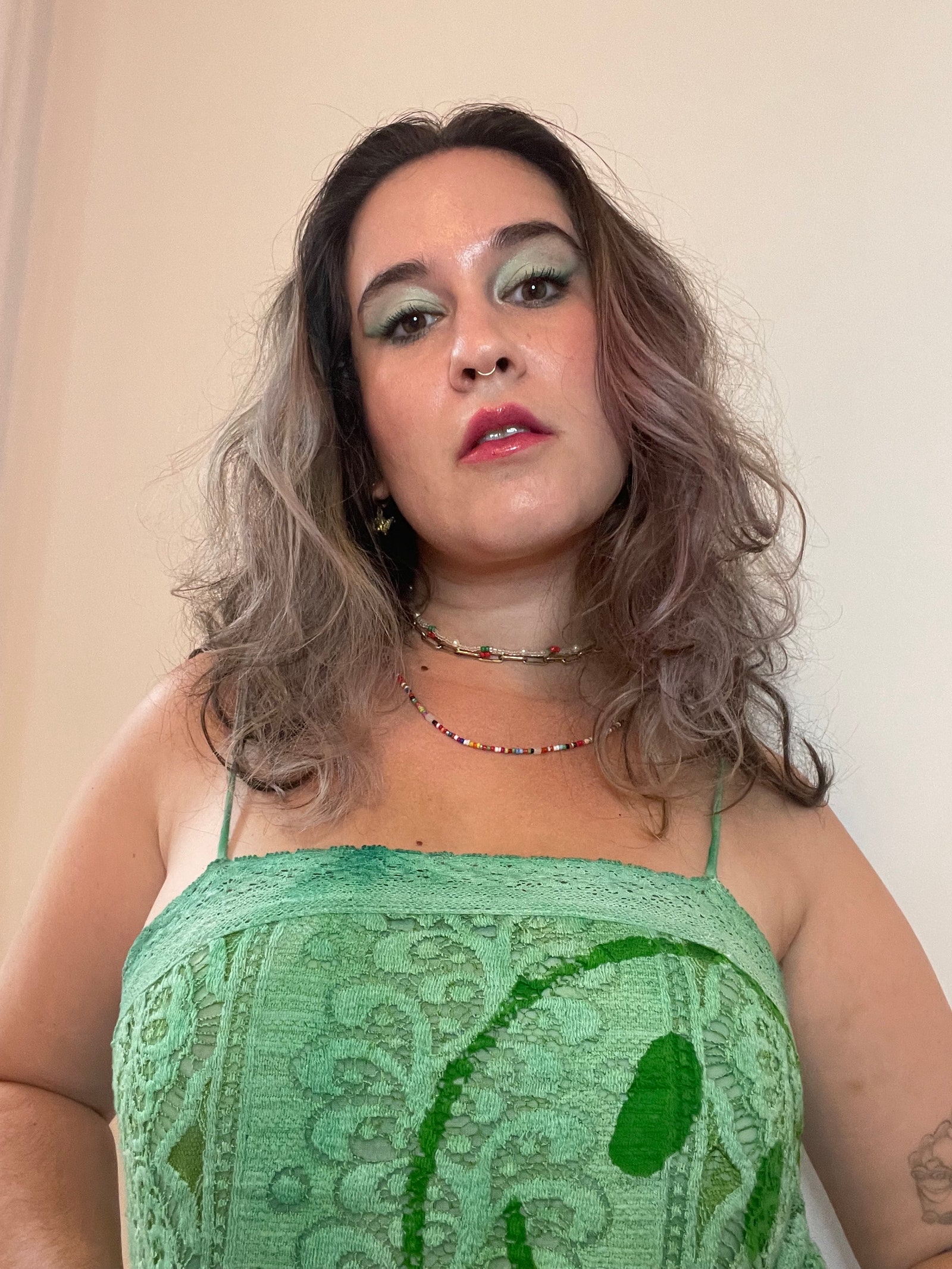 If you prefer neutral eye shadow hues, though, don't worry, Doja didn't leave you out. She also created three variations of the Elements Mini Shadow Quad ($14) in gold, silver, and bronze. You'll be able to finish off your look finessed with whatever palette suits your style with the Blooming Volumizing & Lengthening Mascara ($16), too. 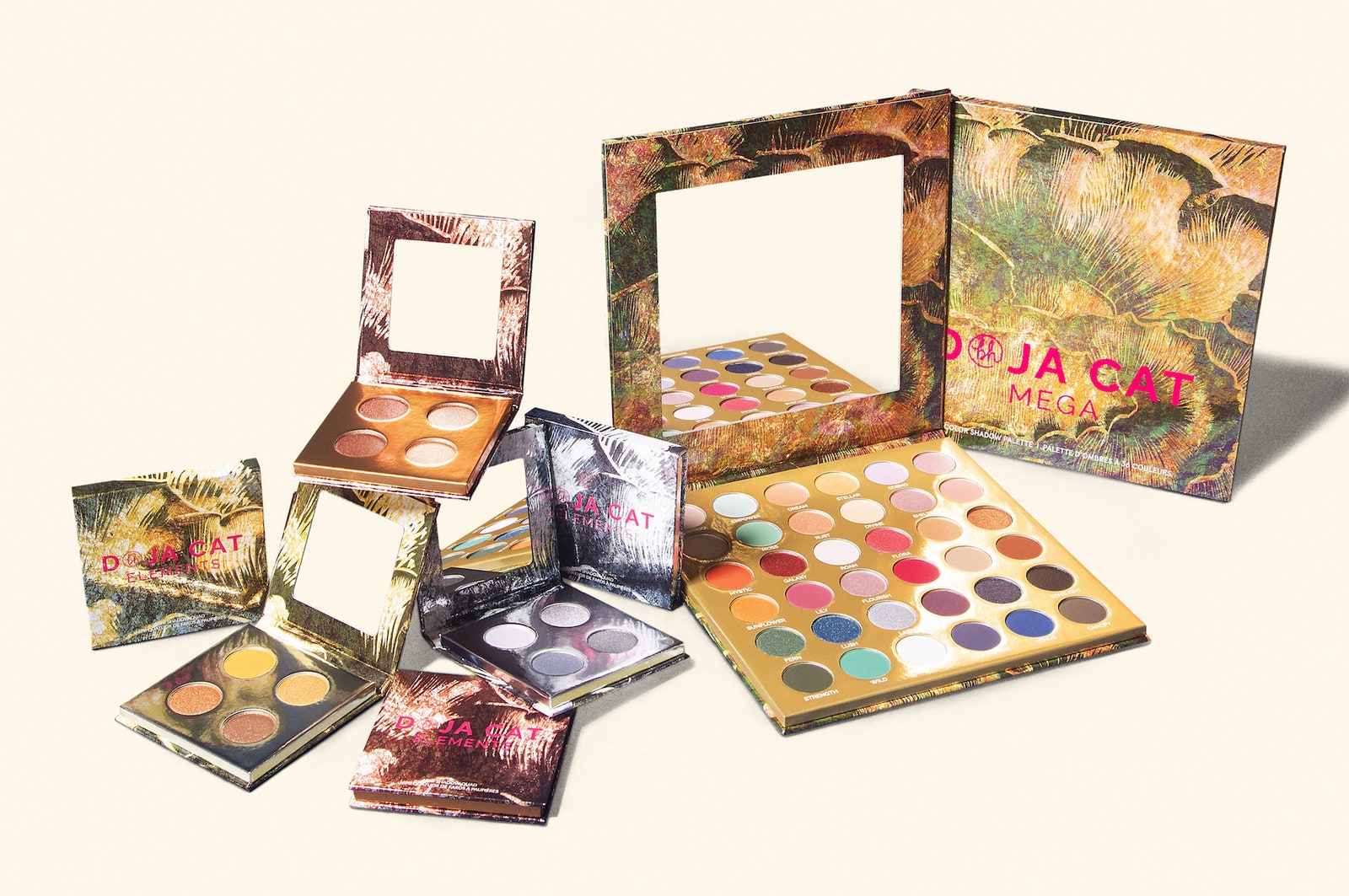 Eyeliners have also been a major tool for Doja Cat's makeup explorations, as we've seen in her music videos and performances over the years with graphic, abstract shapes circling her lids. Incidentally, Doja did her makeup the same way every day when she was younger: brown smoky eyes with black winged liner. Sometimes, her liner would swallow her whole lid and spike upward toward her eyebrows. In this consistency, Doja felt a sense of safety.

But as she grew up, Doja says her makeup evolved with her. Blue liner replaced her go-to black. Reminiscing on that swap makes her cringe a bit now. "I thought it looked cute… it didn't," she remarks. "But the thing is I felt beautiful, and I'd started to learn more about my face." From there, Doja starting dipping into colors she never thought she would — reds, purples, yellows. "It really showed a lot of different sides of me that I didn't know I had," she continues. "I felt like a new person every time I did something colorful and fun." 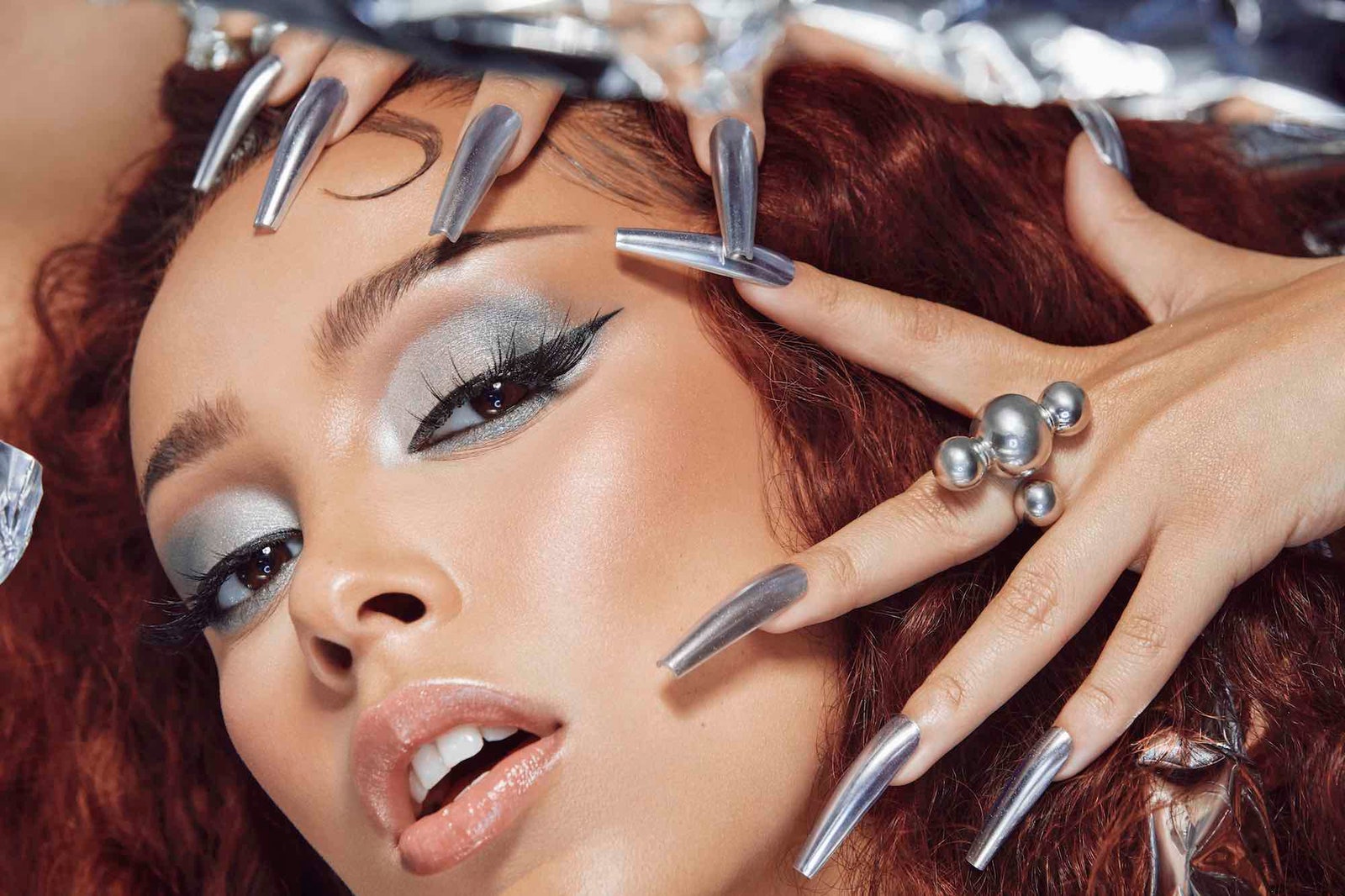 These days, Doja is so specific about her eyeliner that she lets her go-to makeup artist Ernesto Casillas do her whole face except for it. After years of trying to figure out the right method, she now draws her liner on in a batwing shape that flatters her slightly hooded lids. But most of the time, she isn't a huge fan of the liners she's reaching for. None of the formulas were opaque or creamy enough for her liking. They were always too watery, too streaky, too sheer, too finicky. "I'm a huge stickler when it comes to having those pigments pop out the best that they can," she says.

Although she says she is not, in fact, a cosmetic chemist, Doja Cat worked with BH Cosmetics team as closely as possible to make the easy-to-use, high-impact liner of her dreams: the Goddess Calligraphy Eyeliner ($11), which smooth on the starkest of whites, the deepest of blacks, and the richest of sage greens with a paintbrush applicator. 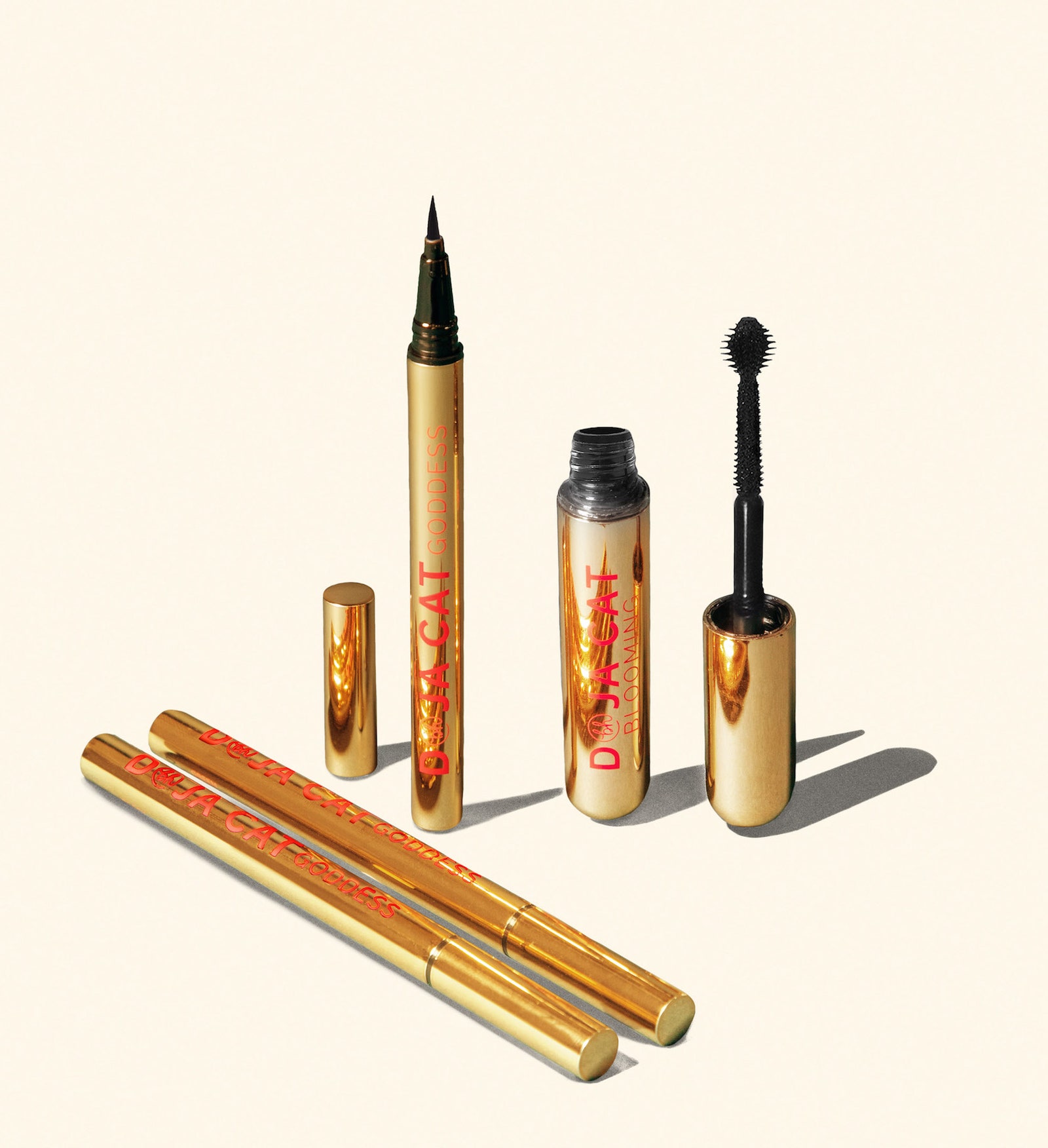 If you ask Rodocanachi, Doja knew exactly what she was doing as if she's been in the industry for years. She knew the intricacies of the formulas she was testing out, down to the texture, color, pigmentation, and packaging. "This collection was all about designing products that Doja herself wanted to use but didn't exist on the market," Rodocanachi explains. "She concepted, hand-tested, and approved every single product. It created a fantastic synergy between her endless imagination and knowledge of beauty."

Although Doja Cat has some of the most lauded makeup artists at her fingertips, she still plays around with makeup — on and off stage — and constantly works on sharpening her own skills. While talking to her, I realize makeup is not solely a way for her to express her identity as a singer, but also as a person. Doja Cat enjoys the thrill of bold makeup when she is on stage singing her hit songs and while hanging out with friends. The only difference between each occasion is the sheer amount of makeup involved and how she wears it.

On stage, Doja Cat jokes that she wears 500 gallons of makeup, which is equally stifling as it is liberating. "You're so far away from everyone, and those cameras need to catch everything," she says, mentioning she'll paint on thicker wings than she does in her free time. Doja also tries to limit the tiny designs she features on her face for performances. "It's hard to do dots, [thin] lines, and little intricacies," she continues. "They feel kind of pointless because they don't register." 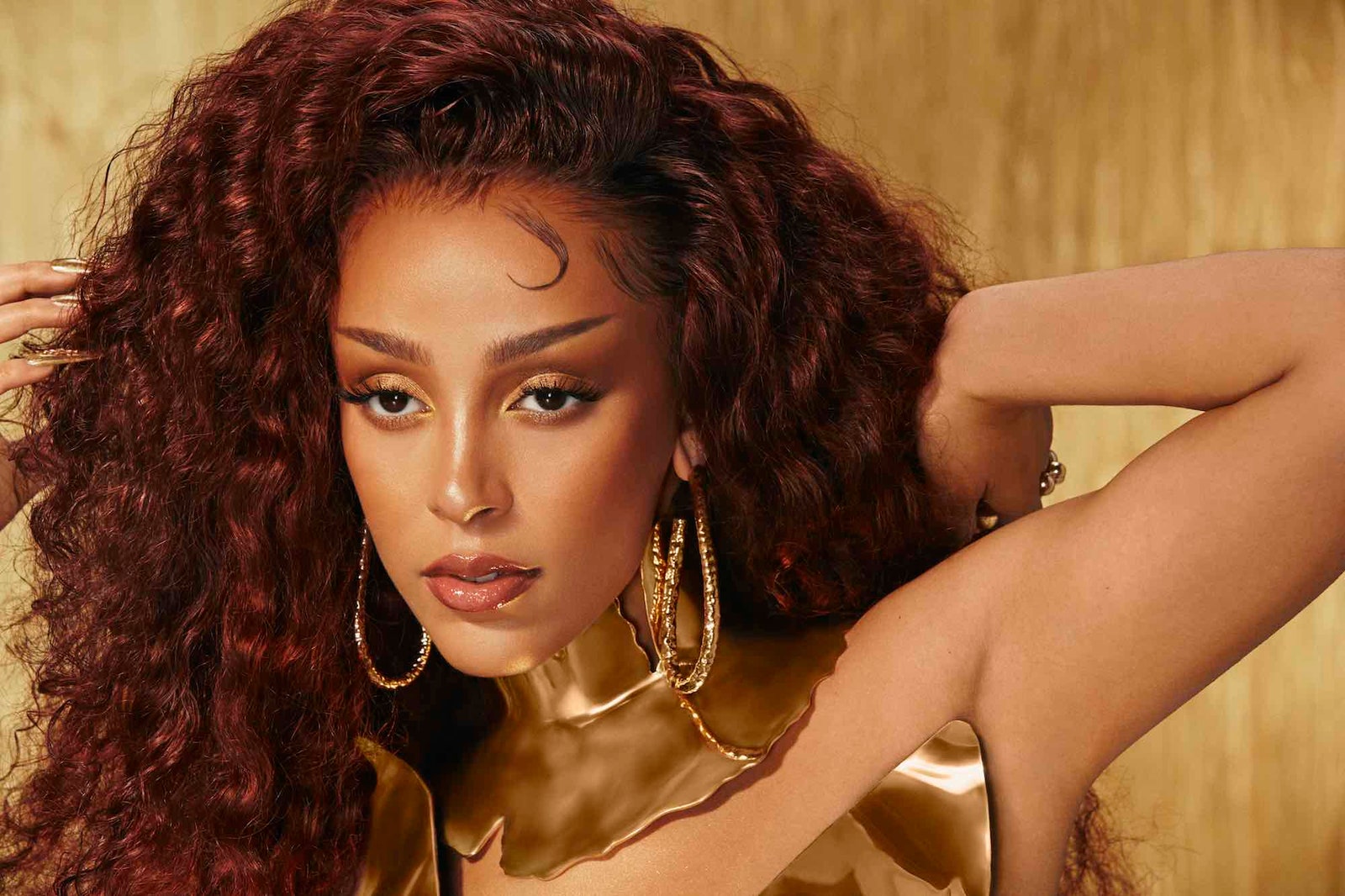 Offstage, on the other hand, Doja Cat can play around with those designs, scribbling all over her face just as she did along the margins of her notes in school. "Your face is a notebook," she says. "It's damn college notebook paper, and you just doodle all over it."

Most recently, Doja has been dotting daisies onto her face with the bottom end of a makeup brush — "just like how they do at the nail salon," she notes. (The Metamorphosis Brush Set ($36) just so happens to have orbs on the ends for adding perfectly cylindrical circles to your own face.) When she was little, she recalls asking for flower nail art, and the technician would make five dots in white for the petals before adding a yellow dot in the center. Doja now does the same on her face. "Doja is a beauty trendsetter, and we learned so much during the collaborative process, down to the way she uses her own products, which is super interesting," Rodocanachi adds. "She'll take a traditional product and give it a whole new purpose on the face."

Most of all, the singer hopes the collection will spark the creativity for others to imagine their own alternate universes and discover their very own unique makeup techniques. "I wanted to open a door for people to explore that," she tells Allure as she riffles through a box of her new gilded products stamped with her name in bubblegum pink. "I want to give people a pass to experiment, be different, and have fun." 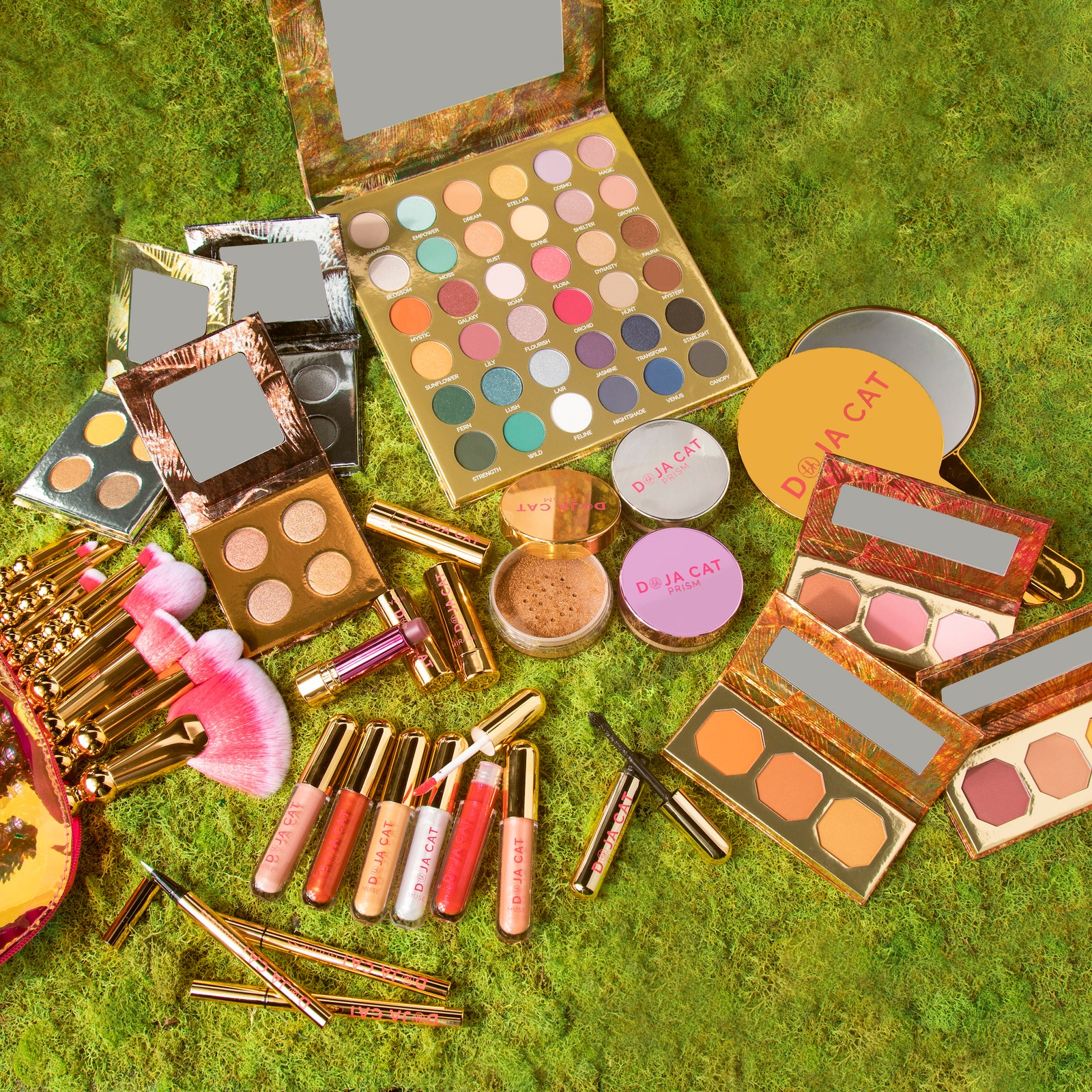 You'll be able to dabble in Doja's delightful world of makeup come September 25 when the Doja Cat x BH Cosmetics collection officially launches on bhcosmetics.com. Later, on October 3, you'll be able to find all the products, which range from $9 to $36, on ulta.com and in-stores.

All products featured on Allure are independently selected by our editors. However, when you buy something through our retail links, we may earn an affiliate commission.