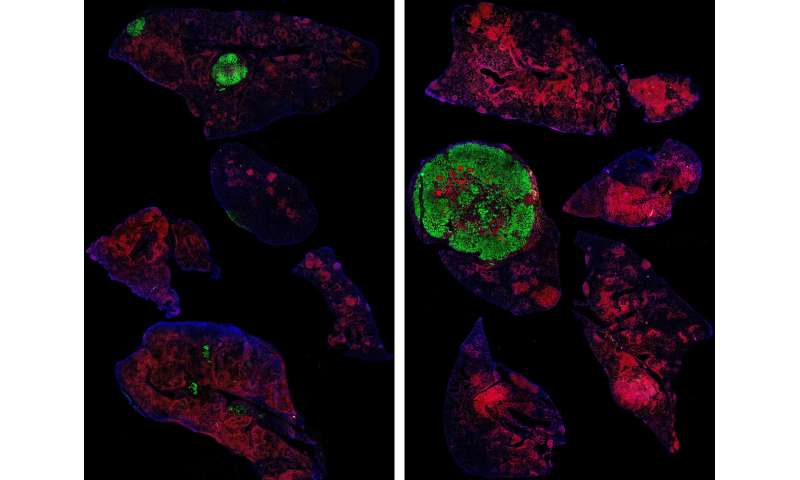 In a study published online Aug. 13 in the journal Cell Reports, researchers restricted circulating glucose in mice with lung cancer. Circulating glucose restriction was achieved by feeding the mice a ketogenic diet, which is very low in sugar, and by giving them a diabetes drug that prevents glucose in the blood from being reabsorbed by the kidneys.

“Both the ketogenic diet and the pharmacological restriction of blood glucose by themselves inhibited the further growth of squamous cell carcinoma tumors in mice with lung cancer,” said Dr. Jung-Whan “Jay” Kim, corresponding author of the multinational study and an assistant professor of biological sciences at UT Dallas. “While these interventions did not shrink the tumors, they did keep them from progressing, which suggests this type of cancer might be vulnerable to glucose restriction.”

While many types of cancer cells are suspected to be heavily dependent on glucose—or sugar—as their energy supply, Kim and his colleagues have shown in previous laboratory studies that one specific type—squamous cell carcinoma—is remarkably more dependent than other cancer types, such as adenocarcinoma.

“The key finding of our new study in mice is that a ketogenic diet alone does have some tumor-growth inhibitory effect in squamous cell cancer,” Kim said. “When we combined this with the diabetes drug and chemotherapy, it was even more effective.”

Kim noted that glucose restriction did not have any effect on non-squamous-cell cancer types.

“Our results suggest that this approach is cancer-cell-type specific. We cannot generalize to all types of cancer,” he said.

The researchers also examined glucose levels in blood samples from 192 patients who had either lung or esophageal squamous cell cancer, as well as 120 patients with lung adenocarcinoma. The blood samples were taken at random parts of the day and classified into those containing glucose concentrations higher or lower than 120 mg/dL, which is one clinical measure of diabetes. None of the patients had been diagnosed with diabetes.

“Surprisingly, we found a robust correlation between higher blood-glucose concentration and worse survival among patients with squamous cell carcinoma,” Kim said. “We found no such correlation among the lung adenocarcinoma patients. This is an important observation that further implicates the potential efficacy of glucose restriction in attenuating squamous-cell cancer growth.”

Kim emphasized that more comprehensive and detailed clinical studies are needed, but the results indicate a potentially novel approach to enhancing cancer treatment.

“Manipulating host glucose levels would be a new strategy that is different from just trying to kill cancer cells directly,” Kim said. “I believe this is part of a paradigm shift from targeting cancer cells themselves. Immunotherapy is a good example of this, where the human immune system is activated to go after cancer cells.